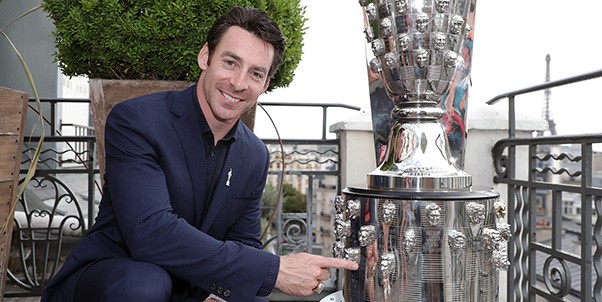 Team Penske driver Simon Pagenaud capped his week of celebrating a life-changing Indianapolis 500 victory in his home country by attending a public party in his hometown of Montmorillon.

Montmorillon is a small town of 6,500 located in central France known for its 150-year history of making macarons by the same recipe and a museum honoring the meringue-based cookie. Now Montmorillon is also known as the home of the 2019 Indianapolis 500 champion.

Pagenaud was certainly the guest of honor, but he shared the spotlight with the Borg-Warner Trophy, which this week made only its second tour outside of North America. The other occasion came in 2017 when Indianapolis 500 winner Takuma Sato took the coveted trophy home to Japan.

Pagenaud got to see his Borg-Warner Trophy likeness unveiled Monday in Paris, with the Eiffel Tower serving as the dramatic backdrop to a rooftop event. Pagenaud did a series of visits to French media outlets accompanied by INDYCAR CEO Mark Miles before making a sweet and triumphant return to Montmorillon.

"Getting the recognition in France is phenomenal for me," Pagenaud said. "It allows (me) to reflect on what I have accomplished by traveling the world with this win."

What's in a number? Maybe an INDYCAR championship

What is the magic number to remain in contention for the 2019 NTT IndyCar Series championship? Five-time series champion Scott Dixon hopes it’s no less than 62, which is how many points he is out of the lead with four races to go in the season. However, recent history is working against the veteran driver from Chip Ganassi Racing.

In the five years in which double points have been awarded in the season’s final race, only two drivers have come from behind in the last four races to take the title. One of them was Team Penske’s Will Power, who only trailed teammate Helio Castroneves by 13 points at this late stage in 2014, and the other was Dixon in 2015. Dixon erased Juan Pablo Montoya’s 54-point lead by tying him and winning the championship on a tiebreaker.

Dixon came from 39 points behind in 2013 while Chip Ganassi Racing teammate Dario Franchitti rallied from 59 points down in 2010. In other words, big rallies are difficult to come by.

Heading into this year’s final four races, Josef Newgarden of Team Penske leads Andretti Autosport’s Alexander Rossi by 16 points. Team Penske’s Simon Pagenaud is 47 points out of the lead. Dixon stands fourth – 62 points behind — with the ABC Supply 500 at Pocono (Pa.) Raceway up next Sunday, Aug. 18 at 2 p.m. ET on NBCSN. Realistically, those are the championship contenders.

Among the many impressive aspects of Scott Dixon's NTT IndyCar Series career is his ability to win races on all types of tracks.

Consider this: 21 of Dixon's 46 race wins have come on oval tracks, and that figure is comprised of six short-track wins, 13 wins on intermediate tracks (generally 1.5 miles in length) and two superspeedways (both 2.5 miles). One of Dixon's superspeedway wins came in 2013 at Pocono.