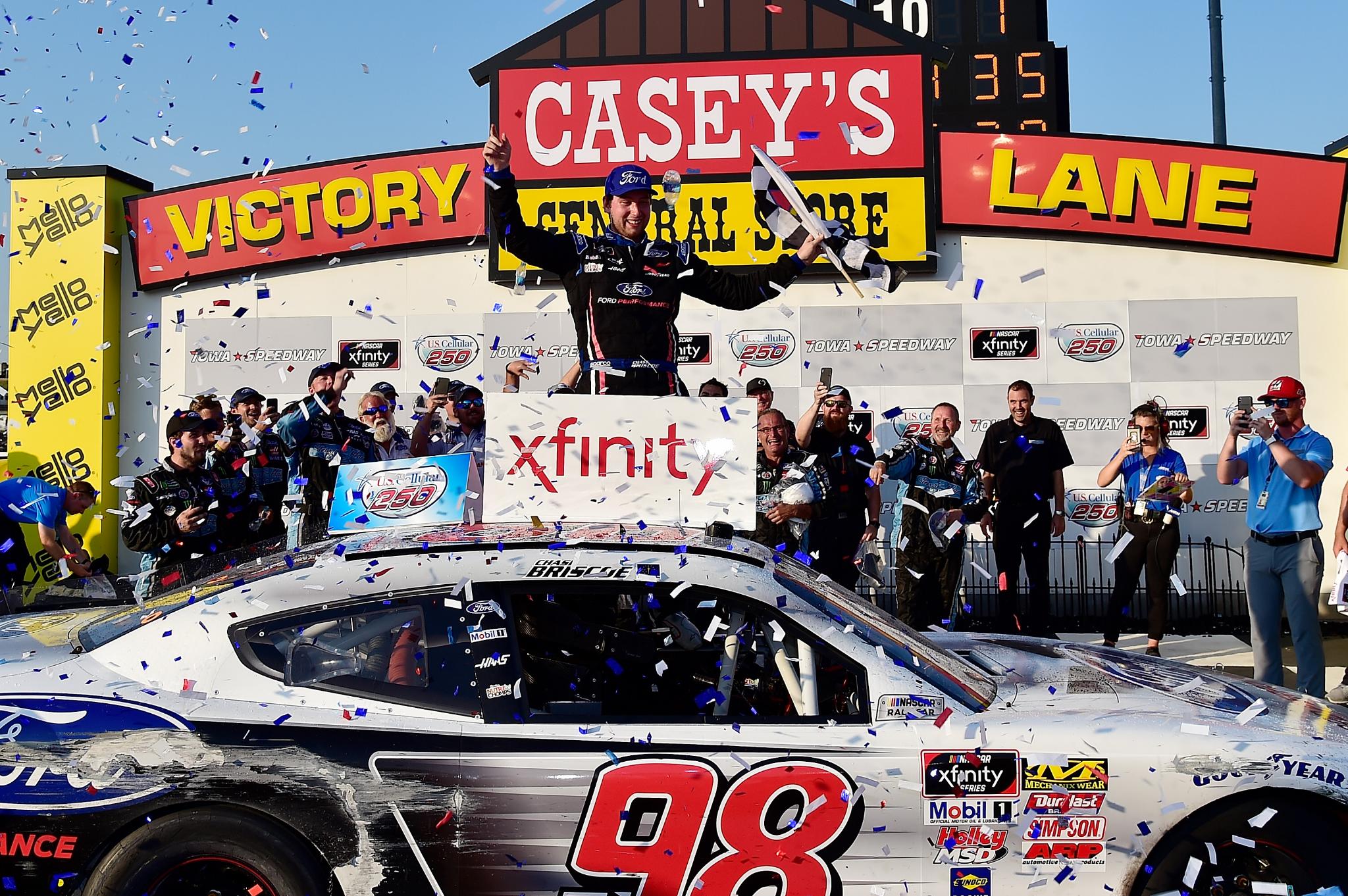 Chase Briscoe's been chasing wins all season in the NASCAR Xfinity Series.

The driver of the No. 98 Ford Performance Ford shrugged off frustration and instead churned up smoke with a jubilant, long-awaited series of burnouts that preceded his first trip to Victory Lane this season.

Briscoe's sweeping slide job past longtime race leader Christopher Bell — who paced the field for a dominant 235 laps — ensured that the physical, caution-marred race would end in a raucous celebration, not head-shaking and second-guessing.

And maybe a run toward the top of the standings, which has been dominated by points leader Tyler Reddick, Bell and Cole Custer — the so-called "Big Three."

"It's nice, for sure, to kind of silence everybody," said Briscoe, who ended Bell's two-race win streak at Iowa while notching his first win on the racy 7/8-mile track. "We definitely are still not near where we need to be, but I feel like we've been way closer, these last couple weeks especially. So we've still got to get better if we're gonna beat the "Big Three," but I feel like we're slowly getting into that conversation of being that fourth guy."

For most of Saturday's race, Bell appeared headed for another breezy victory at Iowa, but worn-out tires doomed him down the stretch as Briscoe's grip and gumption took over.

"He did a good job and did everything he needed to win the race," a dejected Bell told MRN Radio.

Bell cruised to wins in the first two 60-lap stages and now has led more laps at Iowa than any other series driver (668) despite only having five starts at the track.

"I felt like we were a second-place car all day," said Briscoe, who stayed out when Bell pitted with 100 laps to go, allowing him to pit later and run on fresher tires down the stretch. "The 20 was the class of the field."

Briscoe — who started alongside Bell on the front row —overcame an early pit road penalty to earn his first win at Iowa and snare his third straight top-six effort after a 35th-place finish at Daytona.

"It was a lot of fun," said Briscoe, who notched his second career series win and remains seventh in the point standings. "We were definitely racing real hard. That was beating and banging — and that's about as good as it gets."

John Hunter Nemechek finished third and led six laps while battling in the top five most of the day.

"To finish third and say you're disappointed is pretty good I guess," Nemechek said. "We needed this run after the last few weeks we've had."

Briscoe's banner day contrasted sharply with one of the Big Three's series of misfortunes.

Custer ran in the top five most of the day until a penalty for speeding on pit road dropped him to the rear of the field.

He then hit the wall on lap 160, prompting a trip to the garage that ended his day. He finished 29th and remains third in points, behind Bell and Reddick, who finished fifth Saturday.

"I was mad at myself for getting a speeding penalty and putting us back there," Custer told MRN after being evaluated at the infield care center. "Frustrating."

Saturday proved anything but for Briscoe, who had battled Bell at Iowa many times — but mainly online, not on the track.

"We've been racing online against each other for probably 10 years," Briscoe said. "We used to run Iowa all the time in the Xfinity car and have battles like that, so it was fun to do it for real this time."