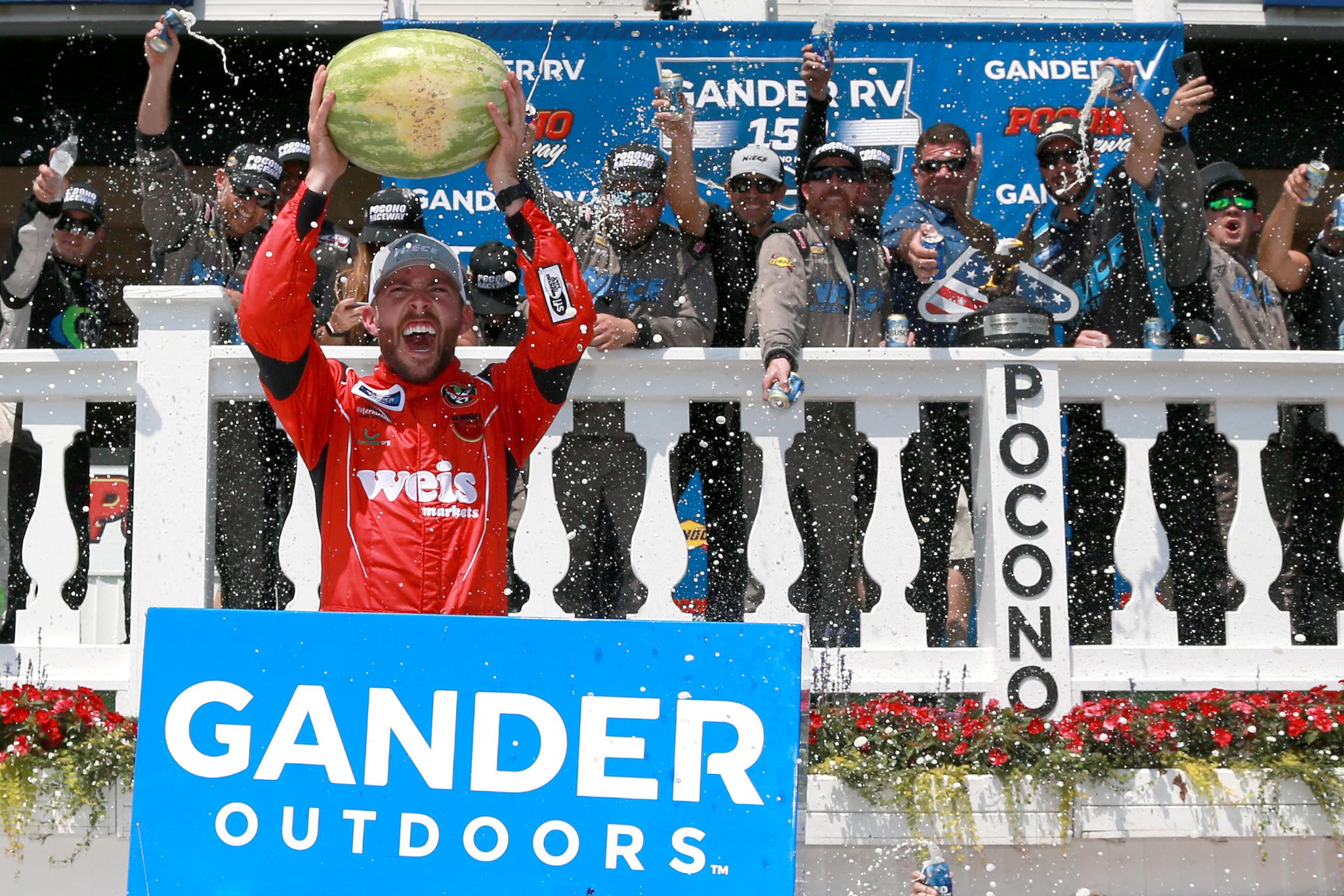 Ross Chastain made it look easy on Saturday at Pocono Raceway, but the battle for Playoff spots intensified dramatically in the Gander RV 150 at the 2.5-mile triangular track.

Pitting early near the end of Stage 2 in the 60-lap NASCAR Gander Outdoors Truck Series race, Chastain regained the lead on Lap 33 and held it the rest of the way, beating surging 18-year-old Tyler Ankrum to the finish line by 1.007 seconds.

Stage 2 winner Harrison Burton charged from 10th to third during the closing 26-lap green-flag run and made a statement where the Playoffs are concerned.

Burton, 18, posted his fourth top five in a span of five races and closed significant ground on Canadian Stewart Friesen, who self-destructed on the first lap. Burton trails Friesen by 13 points for the final Playoff position with two races left in the regular season.

But no one was a match for Chastain, who won the first stage with ease on the way to his third victory of the season and reaffirmed his status as one of the clear favorites for the series title. Chastain dedicated his first Pocono win to Kaulig Racing crew chief Nick Harrison, who passed away at age 37 after last Saturday's NASCAR Xfinity Series race.

"I know we were a little mad because we lost Nick Harrison," Chastain said. "We realize that everybody goes when it's their time, but, man, we miss that big boy. These boys (on the Niece Motorsports team), a lot of them worked with him.

"I got to work with him at Kaulig Racing this year. Man, we miss him."

Ankrum punished his No. 17 Toyota in a futile effort to catch Chastain during the closing run.

"Me and Ross were able to run away from the field," Ankrum said. "I thought I had a good enough truck to chase him down, but I couldn't get close enough to him to catch the draft. I was just fighting 'tight,' and I burned my tires up trying to catch him."

Short of a victory that would have locked him into a Playoff spot, Burton turned in an optimal performance from the standpoint of the points he gained.

"I wanted to win really bad," Burton said. "We had a truck that was capable of winning. I think everyone kind of knew that… We were charging at the end, which was a lot of fun. I didn't expect to be able to do that that well. I thought we were in trouble there on that last restart, but we made a lot of ground up and were really aggressive.

"As far as points, we gained a ton today, which is really, really good."

The Playoff aspirations of Friesen suffered a major blow before the field cleared the first corner. Moments after the start, Friesen took a low line into Turn 1 and his No. 52 Chevrolet broke loose in the corner, collecting the Toyota of Anthony Alfredo and slamming into the outside wall.

Friesen finished 32nd after failing to complete a lap.

"Got spun around, made contact with the wall," Friesen said succinctly after leaving the infield care center. "Just a bummer. Got on the apron there and away we went.

"I had a lot of friends and family here today, and I'm really, really disappointed. I wish I could have done more to last a little longer out there, obviously. We'll be back—it just sucks right now."

If there's a silver lining for Friesen, it's the location of the next race—the half-mile dirt track at Eldora Speedway in Rossburg, Ohio. Friesen has more than 900 career starts on dirt in a variety of series and has finished second and third in his last two Eldora races. Burton finished 15th in his only Eldora start two years ago.