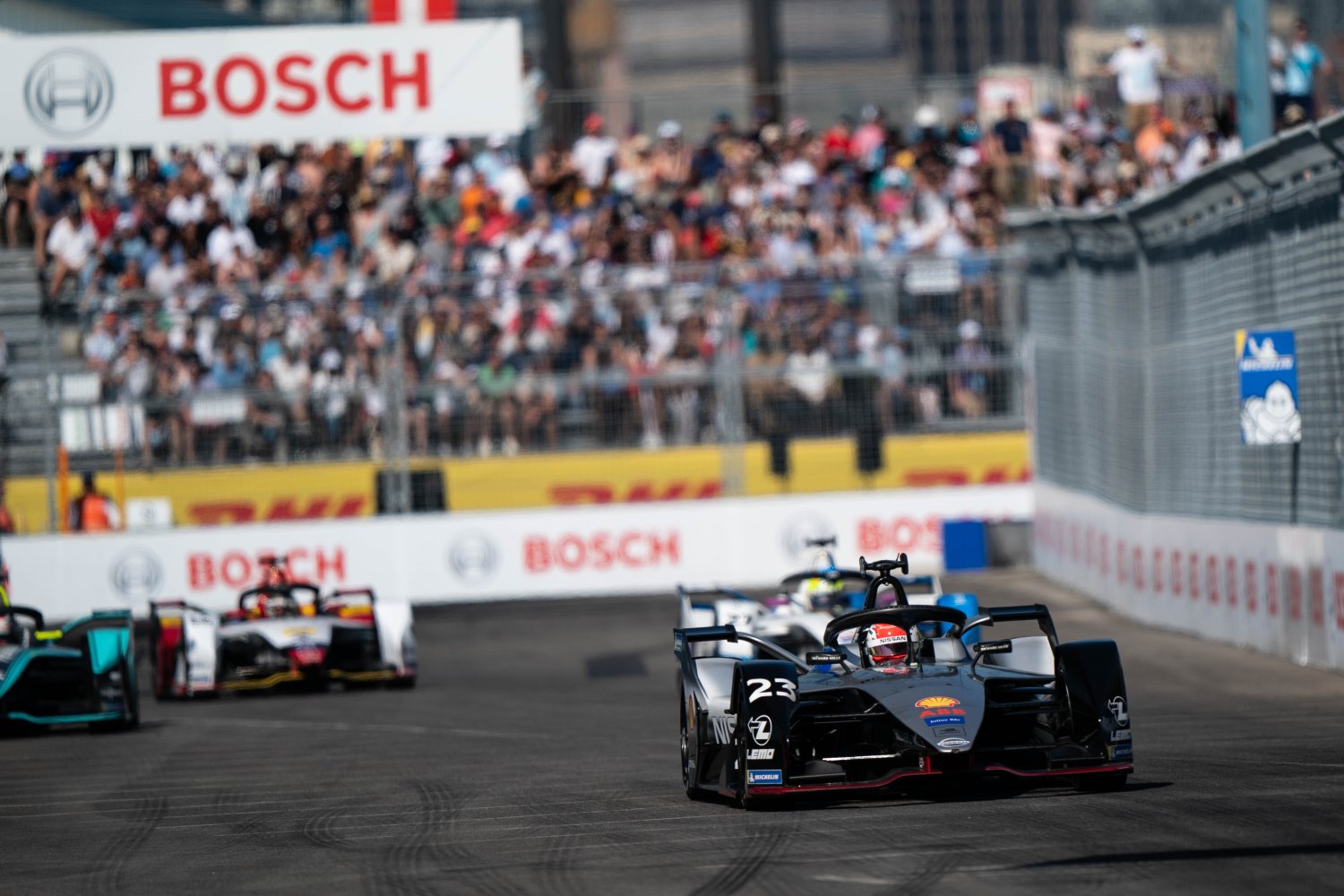 Sebastian Buemi clinched his first win of the season in Brooklyn but disaster hit Vergne, which extends the championship battle for one more day. Here's how it all happened.

Nissan e.dams driver and Poleman Sebastien Buemi pulled away, taking an early lead while the rest of the pack made its way around the 1.4 mile Brooklyn street circuit.

Moments later, Geox Dragon's Jose Maria Lopez spun after a tap from Envision Virgin Racing's Sam Bird, causing chaos on Turn 7. In a bid to avoid the pack, DS Techeetah driver Andre Lotterer swerved into his teammate and title hopeful Jean-Eric Vergne, puncturing his rear tire and forcing him into the pits. With the new tire fitted, Vergne returned to the track in 19th place – far from the points he so badly needed.

[adinserter name="GOOGLE AD"]In the meantime, Lotterer followed his teammate into the pits to repair the damage he sustained to the front of his car. With his front wing and wheel arch littering around the track, play continued as Vergne went on the hunt for di Grassi in 11th – just one position away from the points.

Up at the front of the pack, Buemi held the lead despite challenges from Panasonic Jaguar Racing's Alex Lynn in second. Behind Lynn, BMW i Andretti Motorsport driver Alex Sims kept his distance, biding his time in third while the Buemi and Lynn battled for the top spot.

After contact in the opening laps, Envision Virgin Racing's Robin Frijns retired as a result of the damage he sustained. With 20 minutes left on the clock, Lynn slowed on the track reporting problems with the car. Coming to a stop after Turn 11, the British driver fell from the front and retired from the race, scuppering his chances of his first podium finish of the season.

With the BMW i8 Safety Car deployed, the pack regrouped with Buemi in the lead, Sims in second and Audi Sport Abt Schaeffler's Daniel Abt in third. In a bid to clinch a spot on the Podium, Evans slipped past Abt on Turn 4 to take third, striking the side of the German driver's car in the process. Off the racing line, Abt dropped to ninth, one place behind teammate Lucas di Grassi who had made his way to eighth.

Further down the pack, defending champion Vergne had moved up to 14th, still four places outside the points. Still determined to take the top spot, Evans made another move to take second to challenge Buemi for the lead.

With eight minutes left, Buemi led the way followed by Evans in second and Antonio Felix da Costa in third. In the final lap of the race, a devastating smash on Turn 2 between Vergne and Massa destroyed the Frenchman's chances of clinching the championship title today.

Crossing the line in first, Buemi secured his first win of the season followed by Evans in second and da Costa in third.

SEBASTIEN BUEMI
"It’s been difficult this year, because in many ways I feel like I was leading the races in Santiago and Paris, yet every time something seemed to happen. To finally be able to win is great and I’d like to dedicate the win to Jean-Paul [Driot], our team principal, who couldn’t be here today. Without him the team wouldn’t be the same. I’m really happy and looking better in the championship, and tomorrow everything is still open, so we’ll see what we can achieve. But it’s been a good day."

MITCH EVANS
"We really shuffled things around from Rome and since then the car has been very strong, so to capitalize on that pace is really nice. I’d like to mention that Alex [Lynn] deserves to be up here as well, he had a tough failure today. I’m not sure what happened, but it was good to see him fighting at the front. It’s nice to put at least one Jaguar on the podium. It’s going to be a good battle for second place as well between myself, Seb and Lucas, so hopefully a little bit less carnage tomorrow but hopefully a similar result."

ANTONIO FELIX DA COSTA
"I’m not sure where to start! I started all the way down in eighth and then had the issue with being on the left-hand side of the track and losing places off the line. My car was pretty damaged and hard to drive but we still seemed to have some pace. JEV kept going forwards and I was able to save some energy in key moments of the race and use it afterwards on ATTACK MODE. We managed to have the speed to move up the order, do some moves and defend when we had to. I need to thank Alex [Sims] who let me pass in the end to keep chasing the championship. I’m really grateful to him and the team for allowing this."