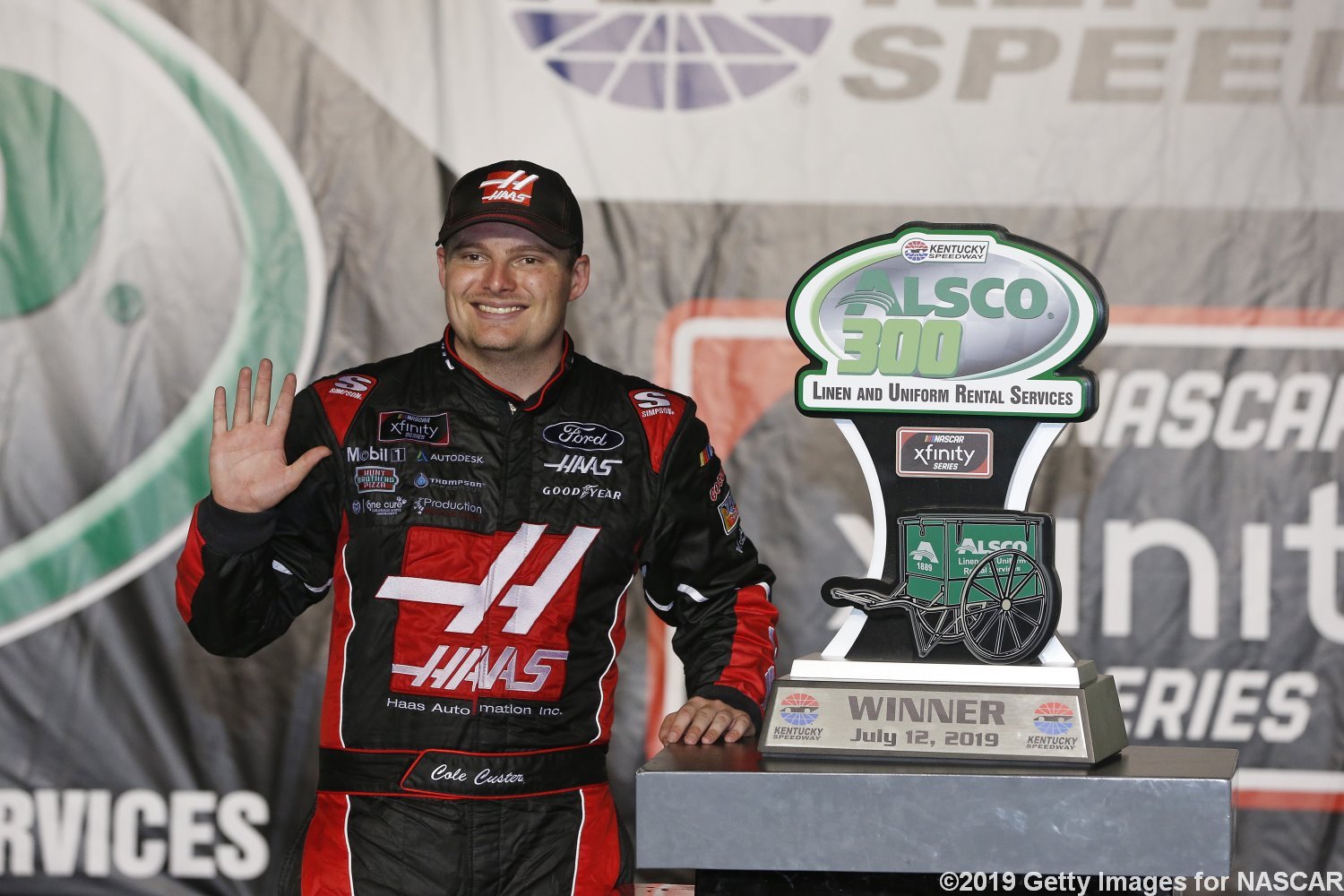 Christopher Bell was dominant in the daytime, but when the sun set Friday over Kentucky Speedway, Cole Custer turned out the lights on his NASCAR Xfinity Series competition.

Under the lights at the end of a 104-lap green-flag run to the conclusion of the Alsco 300, Custer’s No. 00 Ford crossed the finish line 1.651 seconds ahead of Bell’s No. 20 Toyota. Custer had taken the lead from Stewart-Haas Racing teammate Chase Briscoe on Lap 111 of 200 and held it the rest of the way, save for three laps during a cycle of green-flag pit stops midway through the final run.

Bell charged from fifth to second after a restart on Lap 97 but had nothing for Custer at the end.

“It’s been unbelievable," said Custer, who won for the first time at Kentucky and the fifth time this season, breaking a tie with Bell for most in the series. “This one just goes to my team. That car was just unbelievable, and they knew exactly what to do with it when the track changed, and I was just lucky to drive it there at the end."

[adinserter name="GOOGLE AD"]The victory was the seventh of Custer’s career, it was in doubt only when Custer pitted on Lap 151, three laps after Bell had come to pit road for fuel and tires. In the interim, on fresh rubber, Bell had cut Custer’s lead from three seconds to a half-second, but Bell never got close enough to attempt a righteous pass for the lead.

“I think I was a little too conservative on my green-flag pit stop," said Custer, who led a race-high 88 laps. “It worked out good. He got closer, and I was definitely sweating a little bit.

“But we had a fast car and were able to pull away at the end."

After winning the first two stages and leading 72 laps, Bell and his team perhaps got a bit complacent.

“We just kind of got worse there," Bell said. “My car was driving really good. Probably just got a little too comfortable there, needed to free it up a little bit.

“But our Ruud Supra was really fast. We were able to win two stages, so we got a couple more playoff points. We’ve just got to work on a couple more things, and we’ll be good."

Tyler Reddick ran third, albeit 12.808 seconds behind Custer, as the Xfinity Series’ Big Three took all three podium positions. Collectively, Custer, Bell and Reddick have won 12 of the 17 races so far this season.

Michael Annett came home fourth, and Briscoe finished fifth in the No. 98 Ford, the last car on the lead lap. Reddick leads second-place Bell by 67 points in the series standings, after Bell trimmed 10 points off Reddick’s post-Daytona International Speedway advantage.