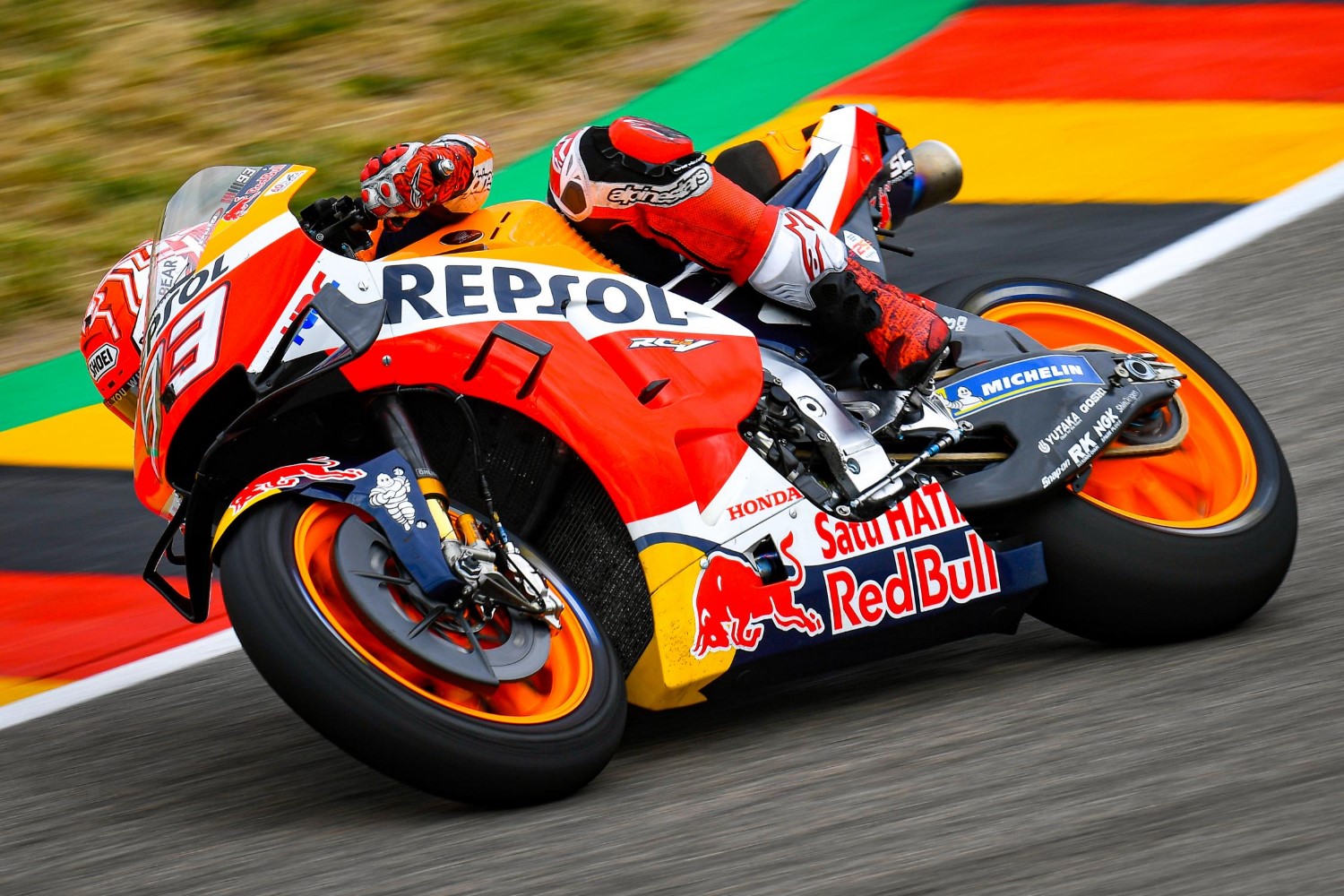 Marquez held off a Q2 challenge from Fabio Quartararo, by 0.205 at the checkered flag as Maverick Vinales completed the from row at the HJC Helmets Motorrad Grand Prix Deutschland.

Marquez was the first man to set a benchmark Q2 time at a sun-drenched Sachsenring, the number 93 slammed in a 1:20.575 as a shadowing Alex Rins (Team Suzuki Ecstar) went to P2, the latter then ran off circuit while on another personal best time before Marquez dived into pitlane – a two-stop strategy for the Championship leader? Meanwhile, Jack Miller (Pramac Racing) shoved his Ducati onto a provisional front row start before FP4 leader Vinales went to P3 behind Marquez and Rins. However, Quartararo then got the hammer down to displace his fellow Yamaha man from P3 to sit 0.204 off Marquez as the riders headed back into the pits for a fresh set of tires.

[adinserter name="GOOGLE AD"]However, Marquez was already on his second flying run and on a new soft-rear Michelin, the Repsol Honda rider set a new all-time lap record. A 1:20.215 moved the goalposts 0.553 clear of his nearest challengers as the undisputed King of the Ring laid down the gauntlet for the riders to try and match. And slowly but surely, that half a second gap started to shrink.

Miller shaved nearly a tenth off of Marquez’ advantage to go second, before Quartararo went within three tenths of pole position – 0.238 the gap between the top two with under five minutes to go. The flying Frenchman, who suffered a subluxation of the left shoulder in an FP3 scare, was just 0.002 off in the third sector, but could he take P1? Not quite, the gap was down to 0.185 though as both Quartararo and Marquez headed onto their final flying laps – the 20-year-old just behind Marquez on circuit.

Both riders set a red first sector but Marquez was superior in the second. Quartararo then went through his favored third split in the red, however, so was Marquez. It all came down to the final sector of the session – would Marquez hold on for a tenth straight pole or would Quartararo steal it from the seven-time Champion’s grasp? Marquez went slightly faster and a couple of seconds later, Quartararo crossed the line, but it wasn’t to be for the rookie sensation. Nevertheless, two tenths off Marquez in Q2 at the Sachsenring with an injured arm and shoulder isn’t exactly bad going.

Vinales finished just 0.006 off Quartararo to lineup in P3, his fourth front row start of the season as Rins spearheads the second row of the grid in P4. By far the leading Ducat rider in qualifying is Miller after the Australian was able to have a great session to launch from P5, he’ll sit next to the brave Cal Crutchlow (LCR Honda Castrol) – the Briton qualifies sixth for the German GP despite suffering a torn ACL and a small fracture to the top of his tibia ahead of this weekend.

Petronas Yamaha SRT’s Franco Morbidelli leads Row 3 ahead of Pol Espargaro (Red Bull KTM Factory Racing), the duo will line up – provisionally – with Joan Mir (Team Suzuki Ecstar). The Spaniard was involved in an incident with Danilo Petrucci (Ducati Team) after it appeared the Suzuki rider held up the Italian on the entrance to ‘The Waterfall’ and on the exit of Turn 12. A furious Petrucci then suffered a huge crash at Turn 9 as the front washed away, ‘Petrux’ headed to the medical center for a checkup and will provisionally lineup P12. Takaaki Nakagami (LCR Honda Idemitsu), having knocked Andrea Dovizioso (Ducati Team) out of a Q2 place in Q1 right at the death, qualifies P10. The injured Japanese rider beat fellow Q1 graduate Valentino Rossi (Monster Energy Yamaha MotoGP) by 0.033 as ‘The Doctor’ managed P11 in Q2.

Dovi will start from P13 as the man second in the Championship has a mammoth task if he’s to limit the potential damage that can be done by Marquez in terms of the overall standings on Sunday. This his equal worst Saturday afternoon of 2019, but Desmo Dovi will take heart after finishing fourth from the same grid slot in Austin.

“I am riding very well and since FP1 I have felt good here. We’ve just been trying different tires and some different things on the bike to see how it compares. Even in qualifying we tried some different things to keep understanding more. We have everything in place for tomorrow but the Yamaha riders are very fast, Vinales and Quartararo are very fast so we will have to keep an eye on them. The pole was possible today but we will have to see if the win is possible tomorrow!"