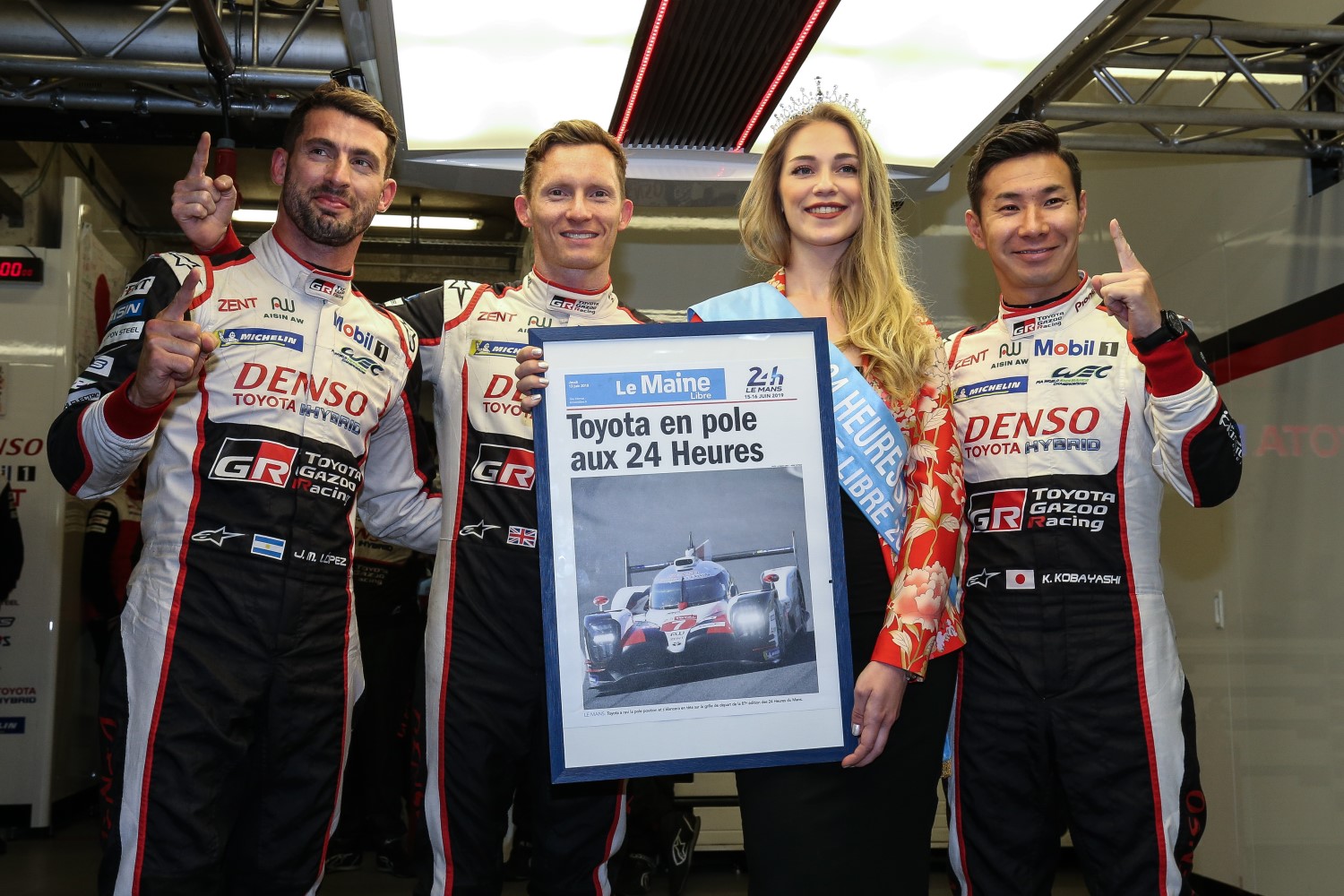 Kamui Kobayashi, in the #7 TS050 HYBRID he shares with Mike Conway and Jose MarÃ­a Lopez, earned his second-ever Le Mans pole, and TOYOTA’s fifth in total, thanks to a lap of 3min 15.497secs set in the second qualifying session.

Kazuki Nakajima, who already has two Le Mans pole positions to his name, made it an all-TOYOTA GAZOO Racing front row for the third consecutive year in the #8 TS050 HYBRID in which he, Sebastien Buemi and Fernando Alonso won the race last year.

The point for pole position brings the #7 crew slightly closer to drivers’ World Championship leaders Sebastien, Kazuki and Fernando. They are now 30 points behind with 38 points still to be awarded in the final race of the 2018-2019 FIA World Endurance Championship (WEC) season.

[adinserter name="GOOGLE AD"]Despite heavy showers all week, the decisive final qualifying sessions took place in dry conditions, setting the scene for a pole position shoot-out, with the starting grid determined by the best single lap time from any of the three two-hour qualifying sessions.

At the beginning of the evening session, held in daylight, Kamui and Kazuki took new tires and low fuel for a qualifying attempt in the opening minutes, with both drivers improving on Wednesday’s times. After that, the team’s focus switched to race preparations and optimizing the TS050 HYBRIDs for the weekend’s race.

After sunset, the final qualifying session also saw Kamui and Kazuki attempt flying laps at the beginning but yellow flags and traffic prevented any improvement before set-up and tire optimization took priority.

When the checkered flag fell after a combined six hours of qualifying, the #7 TS050 HYBRID sat on top of the overall timing sheets, 0.411secs quicker than the #8 car. A close qualifying session saw the #17 SMP Racing come within 0.662secs of pole position, while the #3 Rebellion was 0.907secs adrift; not since 2011 has the gap covering the first two rows of the Le Mans grid been less than a second.

Aston Martin Racing has claimed GTE Pro pole position for this weekend’s 87th running of the 24 Hours of Le Mans, giving the team an early reason to celebrate as the iconic British brand marks 60 years since its famous 1959 win with the DBR1.

The No. 67 Ford Chip Ganassi Team UK car was second fastest, 0.718s ahead of Corvette Racing. The No. 91 Porsche GT Team and No. 82 BMW Team MTEK were fourth and fifth respectively making it five different manufacturers filling the top five spots in LMGTE Pro.

On a dry track and with Danish pro Marco Sorensen at the wheel, the #95 Vantage GTE claimed a best time of 3m48.00, edging out the competition by a mere 0.112s, emphasising just how tough this weekend’s competition will be.

Talking of the lap, Sorensen said, “We had a small issue in Qualifying Practice 2 and the guys did an amazing job to get us ready for tonight’s session. We knew that the moment to go for it would be in those few minutes before the sun goes down. It’s both an amazing feeling when you know “this is it", but also something quite scary if you think about it too much. I was lucky to get some good tows down each of the main straights and I was 100% at the maximum. This is somewhere you shouldn’t push yourself over the limit and you just need to rely on your instincts to do the job. Tonight, it really just felt right. We thought we were there or thereabouts to take pole this evening after yesterday’s sessions, but to actually claim it is a mega boost for the team."

Joining him for this weekend’s race in the ‘Danetrain’ will be team-mates Nicki Thiim (DN) and previous three-time Le Mans winner Darren Turner (GB).

Turner said, “What a great way to start this year’s Le Mans. I have to say that was an incredible lap by Marco and everyone on the #95 crew has prepped the car immensely well. We had a small problem at the end of Q2 which cost us some time, but everyone put in the extra mile to make sure that we had the opportunity to have one last try in Q3. The Vantage GTE performed flawlessly when the time mattered and 12 months on from the debut of this car, this is the perfect way to start this year’s race".

Team-mate Thiim added, “What a week it’s been so far. Coming from last year where we topped the table from the bottom to this year. It just shows the massive development that we have done. Not only over the last three races where we took two of three wins into this race but throughout the whole year. This pole is just a small thing but it means a lot. This is the biggest race on the planet but being at the front makes us all very proud and that everyone can keep their heads high. The racing is closer than ever and it’s going to be an intense 24 hours of GTE racing".

In LMGTE Am, it was a Porsche 1-2-3 with Dempsey-Proton Racing’s No. 88 and No. 77 Porsche 911 RSR cars dominating qualifying after finishing first and second – Matteo Cairoli setting the pace in the No.88 for his second consecutive pole. The No. 86 Gulf Racing was third quickest in a similar car making it a hugely successful Le Mans qualifying for the German marque.

Tomorrow (Friday) will be a day of rest for the drivers before the 87th running of the 24 Hours of Le Mans gets underway at 15h00 CEST on Saturday 15 June. A total of 61 cars will start this year’s race after the No. 99 Dempsey-Proton Racing car was withdrawn following a heavy impact with the barriers during yesterday’s qualifying.

Mike Conway (#7 TS050 HYBRID): “A big thank you to everyone who helped to get the car ready for qualifying after the accident yesterday. It was not easy but they put in so much effort and we have repaid them with the pole. It was a great lap from Kamui and a huge team effort. After Kamui’s lap we focused on getting the car ready for the race. It has been a positive day and it’s nice to get the extra point."

Kamui Kobayashi (#7 TS050 HYBRID): “I am happy to be on pole again here. Actually I was hoping I could improve on my 2017 lap record but I was missing a little bit of time. Two years ago the track conditions and traffic were perfect; it wasn’t quite the same this time. But it’s a great feeling to be on pole and now we put all our effort to get the result on Sunday afternoon."

Jose MarÃ­a LÂ¢pez (#7 TS050 HYBRID): “It’s great to be on pole position but a little mixed; I want to celebrate but 24 hours is a long time to race and the result at the end of that is the target. Congratulations to the whole team, especially the mechanics who worked so hard to get the car ready. This pole position is for them. Now we push to be fully prepared for the race."

Sebastien Buemi (#8 TS050 HYBRID): “It has been a good job from the team because we managed to secure a one-two on the grid which was the objective. Well done to the car #7 guys; they did a good job and put in a very quick lap. The first part of the race event is now done; let’s focus on the important bit which is the race. It’s a 24-hour race so let’s see what will happen."

Kazuki Nakajima (#8 TS050 HYBRID): “I’m pretty happy to be on the front row in second. Qualifying was quite messy, particularly the third qualifying with the traffic. In the second session we had a cleaner run and I was more or less happy with my lap. I could have improved but it was okay. The front row and a strong preparation for the race were the targets and we achieved that."

Fernando Alonso (#8 TS050 HYBRID): “I feel good with the result; it’s job done for us. We wanted to get both TOYOTAs on the front row and we managed it. The privateers were very close but we performed well to stay ahead and also get ready for the weekend. It’s always tough to race for 24 hours so we will prepare ourselves well on Friday and be ready for the fight.