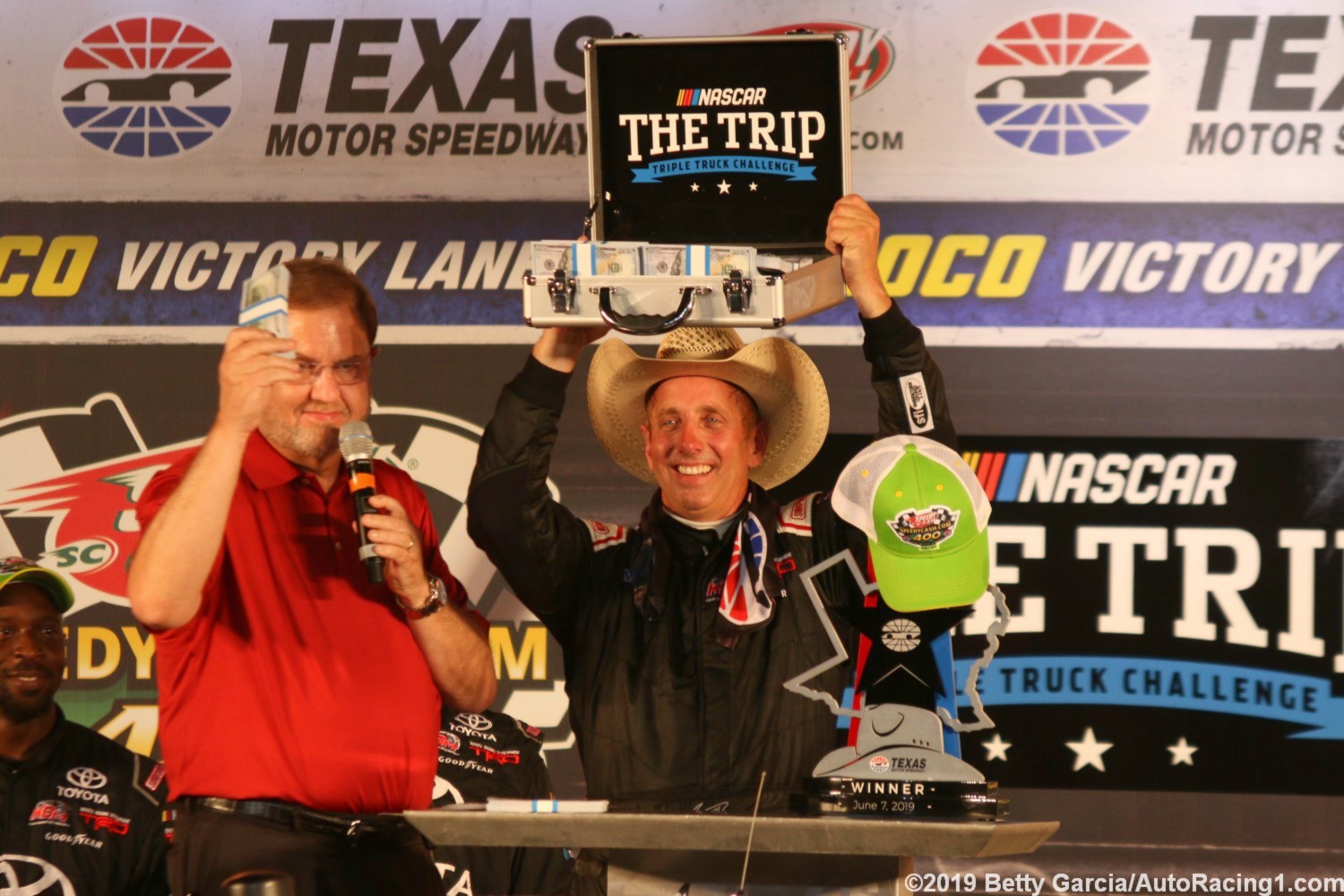 It was, as Greg Biffle screamed over his radio at the checkered flag, an "awesome freaking drive."

Awesome? Improbable was more to the point.

Biffle, the 2000 series champion, outlasted two-time series champ Matt Crafton by 0.9630-seconds at the wheel of his No. 51 Toyota Tundra fielded by Kyle Busch Motorsports. Tyler Ankrum finished third after celebrating his graduation from high school during pre-race ceremonies, followed by Grant Enfinger and Harrison Burton.

[adinserter name="GOOGLE AD"]"It feels really good to come back and drive a really fast truck. I really learned a lot tonight," said Biffle, 49, whose last Truck Series win was at ISM Raceway in Phoenix in 2001. "This series, a lot of competitive trucks here and these (KBM) guys make the difference. They made it easy for me. It was a great opportunity. Just excited to be here, just so thankful to drive great trucks. This thing was really fast.

"So many things went through my head of what I was going to expect. First and foremost I didn't want to make any mistakes. I didn't want to 'run-bad,' in 15th. I felt we could run in the top-five, top-eight. Ultimately the win is always in the back of your mind. These things are humbling. I've been doing this a long, long time but I wasn't pleased where I was in final practice (15th). So I was a bit nervous but talked to Kyle. I was learning clear to the checkered flag.

"This ranks pretty high for me (career-wise), for one of my wins."

The win was sweetened by a $50,000 bonus for winning the opening round of NASCAR's Triple Truck Challenge that continues next at Iowa Speedway.

"It's great," Biffle joked, already politicking for another start. "I've been off work a long time. But my phone's back in the motorhome. I'll get hold of Kyle."

Biffle – working here with crew chief Rudy Fugle – now has 82 Truck Series races on his resume, with 17 wins, 43 top-five and 55 top-10 results. This was Bjffle's sixth Truck Series start at TMS, where his previous win was scored in 2000. He qualified on-pole and led 120 of 167 laps in that spring event en route to his championship for team-owner Jack Roush.

Biffle also scored Monster Energy NASCAR Cup Series spring victories in 2005 and 2012 at TMS during his tenure with Roush Fenway Racing, which ended at the season-ending race at Homestead-Miami Speedway in November 2016.

Biffle led twice for 18 laps in a race dominated by Enfinger, who led 44 laps in his No. 98 ProtectTheHarvest.com Ford F-150. Biffle took the lead for good from Ankrum on Lap 155 and eventually held Crafton at bay.

Enfinger leads the championship by 37 points over Stewart Friesen, who finished 20th after breaking loose and hitting the Turn 2 wall with his No. 52 Halmar International Chevrolet Silverado while trying to pass Biffle on the inside on Lap 109 of the scheduled 167.

The race produced a record 13 caution periods, three more than the previous total and took 2 hours, 29 minutes and 39 seconds to complete.

Crafton said he needed a few more laps in his No. 88 Chi-Chi's/Menards Ford to perhaps catch Biffle, whose fuel supply was in question. "We made hay with him and got there and just really got tight," Crafton said. "It really sucks to finish second." Crafton posted his 27th top-10 finish in 38 races at TMS and his eighth top-10 result of 2019.

Ben Rhodes won Stage 2 over Friesen with Burton placing third. Rhodes, driver of the No. 99 Carolina Nut Ford, earned his first stage win of the season in a segment that saw Ankrum's No. 17 RAILBLAZA Toyota slide sideways through the pits on a restart on Lap 75.

"I'm thankful for the pit strategy of my team, they got me track position," Rhodes said after 15.9-second pit stop at the end of the segment. It was a wasted effort, as Rhodes lost power and veered to the outside as the green flag fell on Lap 95. Rhodes returned to the pits on Lap 96 – during the race's record 11th caution – with what was reported as a transmission that was stuck in fourth gear.

Johnny Sauter, the defending event winner, won Stage 1 in a dash to the flag with Austin Hill following a short red-flag stoppage (1:16) to clean up debris after Angela Ruch's accident in Turn 2. Enfinger finished the 40-lap stage in third. It was the third stage win of the season for Sauter, who locked up a spot in the Playoffs by winning on Dover International Speedway's Monster Mile.

Sauter's night went awry on Lap 56, however, when his No. 13 Tenda Heal Ford fielded by ThorSport Racing broke loose in the Turn 4 banking and slapped the wall with the right side. Sauter, the 2016 series champion whose five wins here is the most among active drivers, returned to finish 13th, one lap down.

Pole-sitter Todd Gilliland's promising night took a hit when he spun out of the lead on a restart on Lap 69 and whacked the backstretch wall. Gilliland, who qualified on-pole at 184.761 mph earlier Friday, was pushed to the pits after his No. 4 Mobil 1 Toyota sustained heavy right side damage that disabled the battery.

"I got loose on the bottom and not a lot of fun when it happens," the third generation driver said. "I think we executed good until that. We qualified on-pole, but it still sucks we're out of this race. I thought we were going to have something for 'em tonight. I need to be more patient, get smarter. We've got an important stretch coming up and need to keep the morale up."

You are here because Kyle Busch asked you to drive this truck. What does this win mean to you?
“It means a lot to me that Kyle gave me this opportunity to come back and drive this truck. Thanks to everyone that stood behind Kyle Busch Motorsports, Mobil 1. This Gander Outdoors Truck Series has a lot of competitive trucks, and these guys make the difference. These guys are a great group of guys that Kyle put assembled. TRD, Toyota ran great today. I am just excited to be here. I don’t even know what to say. I am so thankful for all the opportunities I have had to drive great trucks. This thing was really fast. It was hard to figure out how to pass here. It was my first time with this package, so it took me a little bit, but I got used to it in the end."

How was it out there?

“It was not easy. I had my work cut out for me. At the beginning of the race, so much odd stuff happened. We ran five laps at a time and then the caution would come out. There was a lot of people wrecking in front of me and behind me. I was just trying to keep the truck clean and stay out of trouble. Then we got four-wide off of turn 2, and I didn’t know you could do that here. We beat the fenders in a bit, but the Mobil 1 Toyota ran really good tonight. I want to thank those guys for coming on board and helping us. Kyle Busch assembles a great group of guys. The pit stops were phenomenal. Rudy (Fugle, crew chief) did a great job calling the race from the top of the box. It’s not easy to win these, but I can see how Kyle has done very well."

How close do you think it was on fuel there at the end?

“I probably wasn’t as nervous as Rudy (Fugle, crew chief) was. I knew it was close. It was a good call for him to keep us out there. We had no tires, and that little bit of gas wasn’t going to do anything. We were already fourth. I just figured we would stay out."

You won the first race in the Triple Truck Challenge. Are we going to see you at Iowa?

“I don’t know. I think they have a plan together for all of trucks to run, but we will just have to wait and see what happens."

“I don’t even know. I haven’t been this excited in a long time. It is fun to win these things. I have won a lot of races, but never won on fuel mileage, never. I was just praying to the fuel cell gods that we had enough left in the tank. These guys are awesome. Toyota, Mobil 1, TRD, Kyle Busch Motorsports; this is great. Six wins."

How close were you on fuel?