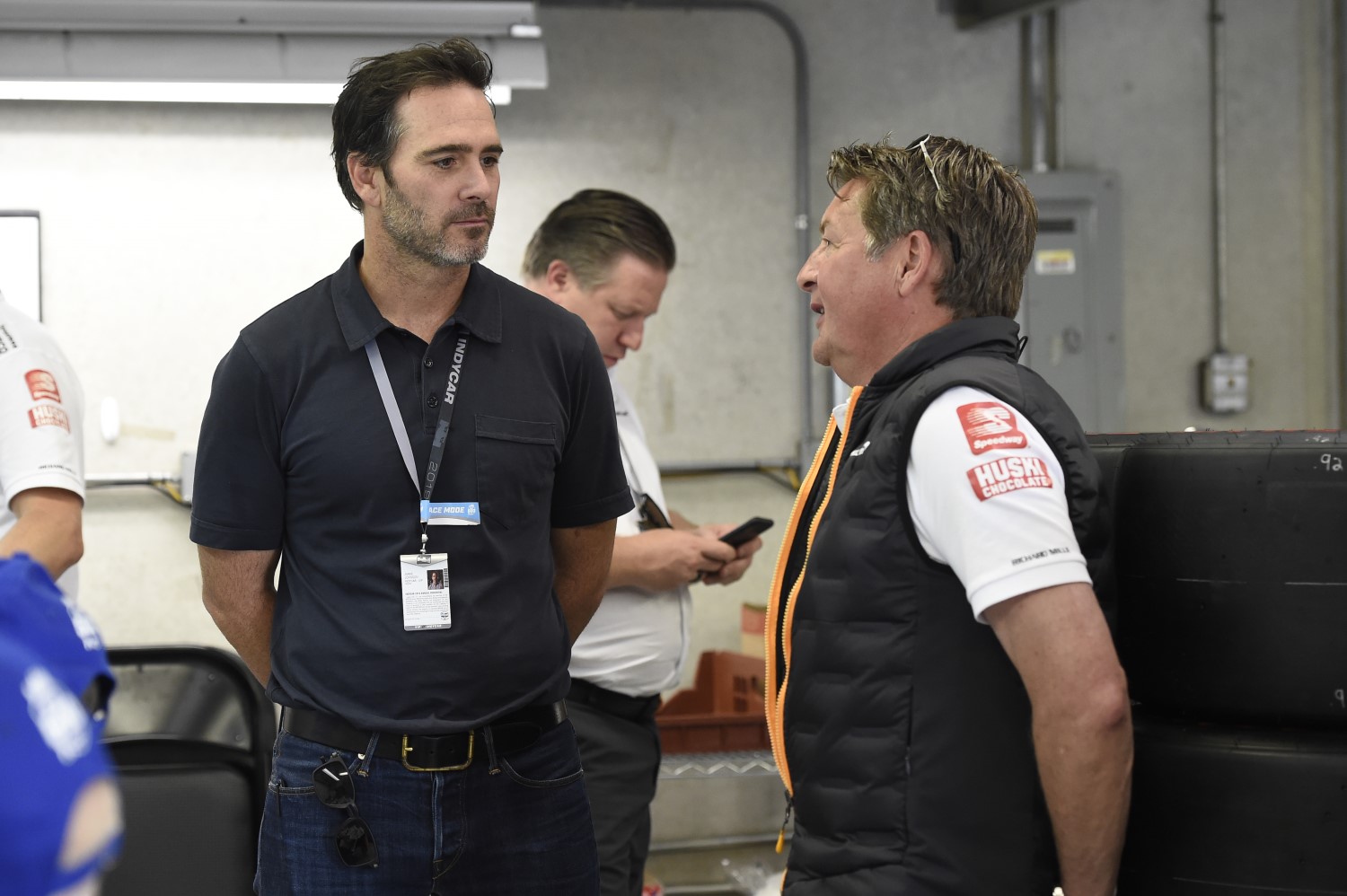 UPDATE This rumor is downgraded to 'near-false' today. The too slow Jimmie Johnson has hit that age in his career where he can no longer win. The reflexes have slowed too much.

“I know that this oval [Indy] is probably not going to happen for me ever," Johnson told NBC Sports. “That opportunity has passed for me."

But, Johnson isn’t totally ruling out a potential one-off in an Indy car – just not at Indianapolis.

“I grew up watching Indy cars and some day down the road I’d love the chance to race in a road course event or something like that," he said.

05/16/19 Jimmie Johnson was in the McLaren garage today to check out the McLaren operation and follow the action on the track.

Is he getting more serious about trying out an IndyCar race or two?

Or was he just there to check up on his ride-sway friend Alonso, who of course did zero running today while his backup car was prepared.

11/26/18 Following his ride-swap with Fernando Alonso, in which Johnson drove a Formula 1 2013 McLaren-Mercedes MP4-28V8 at Bahrain International Circuit, and Alonso drove a Hendrick Chevrolet NASCAR, Johnson was asked if open-wheel racing would be of interest.

“Without a doubt," responded Johnson, who grew up with Indy car legend Rick Mears as his hero. “2020 is my last year under contract with Hendrick, and I’ve been approached many times about the Indy 500.

“I’m not overly excited about those fast ovals, but I think with my status and relationships I could put together some road course races in IndyCar.

“I’ve done sportscar racing in the past, I’ve finished second in the Rolex 24 a couple of times in the Prototype division, I’d love to get back to doing that. Anything’s open.

“I’m far from done, I want to keep driving and hopefully I can find some good opportunities."

Johnson who, like Mears, started his four-wheel career in off-road racing, admitted that the last time he’d tried an open-wheel car had been a “single-seater desert buggy [with] a 1600cc Volkswagen engine in it – maybe ’94…" confirmed he’d not driven an open-wheel car on a circuit. He explained that he approved of racers being more versatile.

“I feel like drivers at a young age have to decide if they’re going to drive sedans or open-wheel cars," he stated. “I don’t know if that’s right, if it’s right for that judgment to take place.

“I look back at some of my heroes – and I know some of them are yours – but when you look at Parnelli Jones, Mario [Andretti], Dan Gurney, Emmo [Fittipaldi], they raced anything. And I don’t know where that got lost. In the ’80s or ’90s, it was ‘You’re just open wheel and you’re just sedan.’