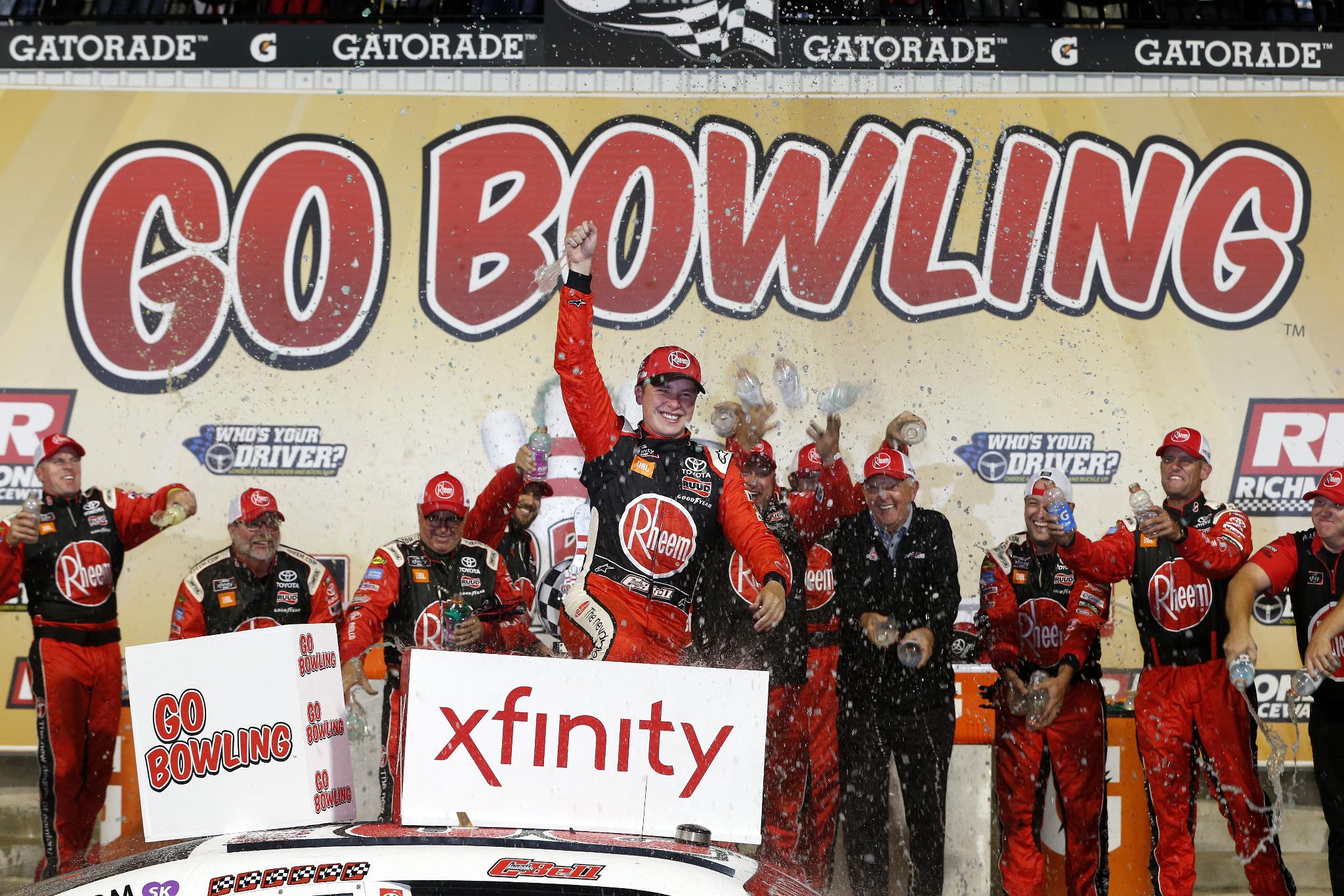 Eager to add a NASCAR Xfinity Series championship to his resume in perhaps his final season in the series, Christopher Bell made an emphatic statement in Friday night's Go Bowling 250 at Richmond Raceway.

Bell swept the first two stages of the series Playoff opener—bringing his total of stage wins to 17—and led a career-best 238 laps in the No. 20 Joe Gibbs racing Toyota, winning for the seventh time this season, the third time in five starts at the .75-mile short track and the 15th time in his career.

"That one was pretty special," said Bell, who passed pole winner Austin Cindric for the lead on Lap 86 and never trailed after that. "Going 92 laps straight there (on the final green-flag run) was really difficult. We were sliding all around.

"I felt like, if I could get through traffic, I would be in good shape because my car could really move around good. I could run up (the track) and I could run down. The No. 00 (eventual third-place finisher Cole Custer) was keeping pressure on us pretty good, but this Supra was too good."

Bell finished 1.700 seconds ahead of Cindric, who passed Custer on Lap 239 of 250 to secure the runner-up position. Bell's car was so dominant that he opened a lead of 7.743 seconds over Cindric before Vinnie Miller hit the Turn 2 wall to bring out the second caution on Lap 51.

The only pressure Bell felt during his cruise to the checkers came from Custer, who passed Cindric for second on Lap 87 and shadowed the race winner early in the final stage, drawing within three car lengths at one point before Bell widened his advantage in traffic.

"The 00 could kind of close a little on us in the middle part of the run, but I was just trying to keep hitting my marks, keeping the rear tires underneath me and running on that yellow line (at the apron). When the 00 was closing, I was getting nervous, because I was pretty much running as hard as I could without slipping the tires), and he was gaining on me a little at a time there.

"It seemed like my car could move around maybe a little bit better than his, and lapped traffic helped me get a little bit of a gap."

Custer faded to 4.432 seconds back at the finish.

"We were just kind of loose to start the run," Custer said. "It kind of got worse, and I was using too much break and got to tight center (in the center of the corners). We were really close there for a second, but I just didn't have the long-run speed."

Cindric posted his second straight runner-up finish at Richmond, after running second to Custer in the spring. He's fourth in the standings with a comfortable margin heading to the Charlotte Roval.

"This is the only double-digit buffer I think I've ever had in anything in NASCAR, so I'll take it," Cindric said. "Obviously, a really good night for the MoneyLion Ford Mustang, keeping the Fords up front. Two runner-up finishes here at Richmond is good, but you want to win races, so I've got to keep working and keep figuring out how to catch that guy in the 20 (Bell). But overall, a great day."

Justin Allgaier finished fourth after qualifying second and dropping to the rear of the field for the start because of a pre-race tire change. Chase Briscoe ran fifth, followed by Harrison Burton, Noah Gragson, Zane Smith, Michael Annett and Tyler Reddick.

With an automatic berth in the Round of 12, Bell leads the Playoff standings by 18 points over Custer and Reddick. Brandon Jones (11th Friday), Ryan Sieg (12th), Justin Haley (17th) and John Hunter Nemechek (15th) fell below the cut line for the next round, with an elimination race looming two weeks hence at Dover.

“Yeah, that one was pretty special. Going 92 laps straight here is really difficult. We were sliding all around. I felt like if I could get to traffic I was going to be in good shape because my car could move around really good. I could run up or I could run down. The 00 (Cole Custer) was keeping pressure on us pretty good, but this Rheem Supra was too good."

You said this week it’s really important for you to try to win this championship. You threw that gauntlet down tonight.

“Man, we have been really, really fast all year long, but the last three races, we had an opportunity to win. We have been slacking a little bit, and I’m glad we got it done."

What do you want to say to the fans tonight?

“I want to say thanks for coming out. It’s an honor to run in front of you guys. If you don’t come out, we have no one to race for. Thank you to all the fans for coming out."

It doesn’t matter what they throw at you after a night like tonight.

You began the night telling me that you weren’t very good in qualifying. What did you throw at it tonight?

“Well, I think I told you that it wasn’t good in qualifying, so hopefully that meant it was good on the long run. It was pretty good on the short and the long run. The 00 (Cole Custer) could kind of close on us in the middle part of the run. I was trying to hit my marks, keep my rear tires under me and run on that yellow line."

Did you have any concerns when Cole Custer was catching you?
“I was just trying to keep a gauge on my gap there. When the 00 (Cole Custer) was closing, I was getting nervous because I was trying not to slip the tires. I was pretty much running as hard as I could without slipping them and he was catching me a little bit at a time. It seemed like my car could move around maybe a little bit better than his. Lap traffic got me a little bit of a gap. It was tough work. 90 laps here is difficult. You feel like you are crawling after it, but this Rheem Supra was really, really good, and I’m just thankful to drive for Joe Gibbs Racing. I’m glad that I can drive for all of partners at Toyota, TRD, all the people at Xfinity that put on this series. It’s a lot of fun to drive these cars right now."

How important is this win knowing you don’t have to worry about the Roval next weekend?

“I think I told every one of my guys, this is an important race right here because if you win this, you’re pretty much safe until you get to the middle of October going to Kansas. This one means a lot. And it’s number seven, that’s pretty good too."

You really dominated this race except the lapped traffic seemed to give you some trouble.

“It’s tough. The longer you go, the more you start slipping around. The 00 (Cole Custer) was really good. He was kind of keeping pace with us, gaining on me a little bit. Just had to stay focused and continue to hit my marks."

What is it about this track with this being your third win at Richmond?