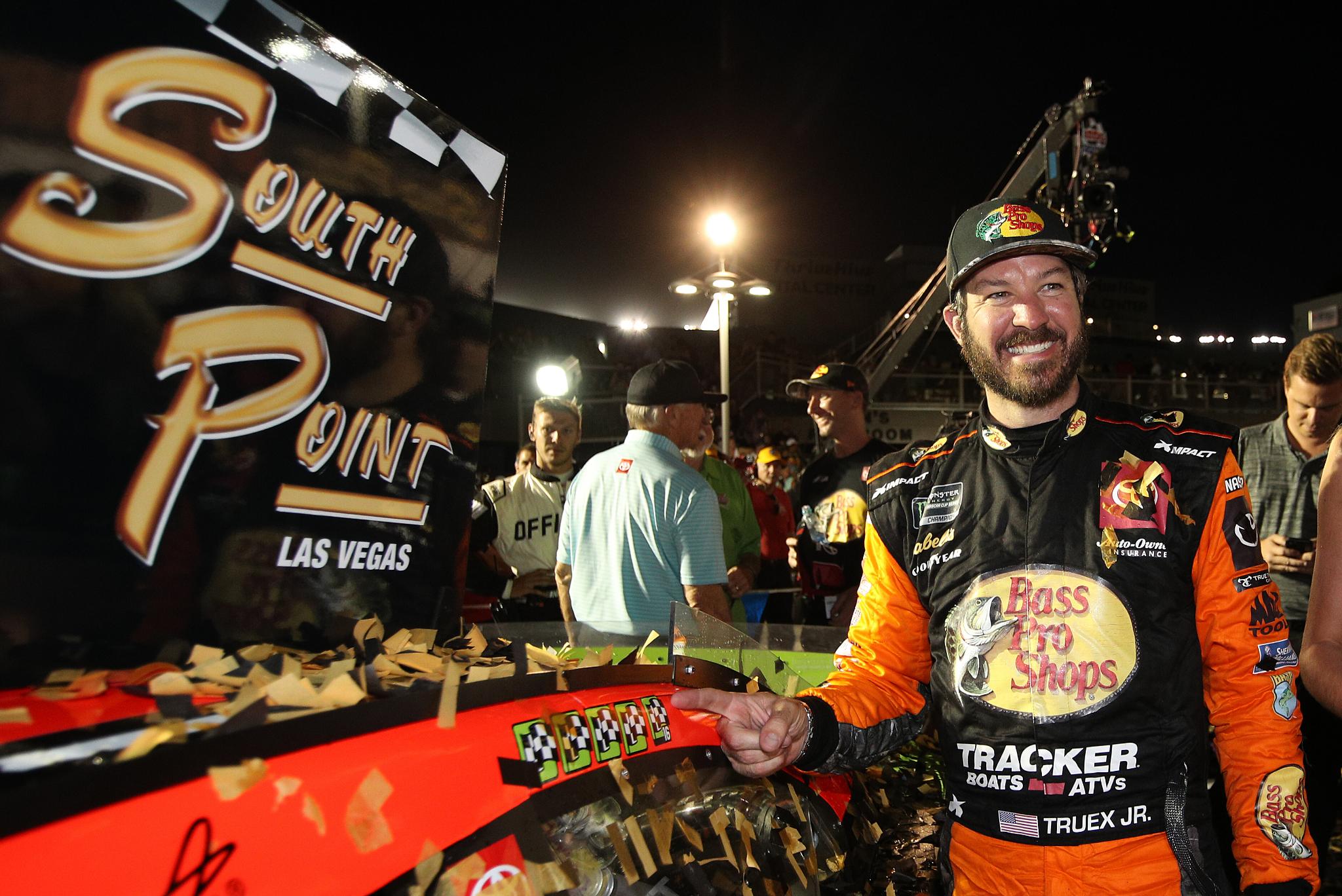 It had been almost three months since Martin Truex Jr. last raised a trophy and while others may have wondered about his No. 19 Joe Gibbs Racing Toyota team's Playoff potential, this team never wavered in its confidence or pursuit.

And sure enough, they were the ones celebrating in Victory Lane at Las Vegas Motor Speedway after Sunday night's South Point 400 Monster Energy NASCAR Cup Series Playoffs opener.

"Welcome back." an ecstatic Truex screamed to his team on the radio after taking the checkered flag an impressive 4.173-seconds ahead of fellow Playoff competitor, Stewart-Haas Racing's Kevin Harvick.

It was Truex's fifth victory of the year – best in the field – and an automatic ticket to the next round of the Playoffs.

"We took a gamble, qualified 24th," said Truex, who led 32 laps. "For a while it wasn't looking too smart with the 4 (Harvick) out front. Got the right adjustments in the end. Had a great car all day long.

"Hell of a way to make a championship run. Get some good bonus points, move on to the next round, see what we can do there."

As strong as Harvick's Ford had been – leading 47 laps on the day – he said after the race he really didn't have much for Truex in the end.

"I knew the Gibbs cars would be tough,'' said the 2014 Cup champ. "Martin was just so much better on the second half of the run. He made up that ground there, was able to stay close enough to us. My car started to get loose and push the front. It was just in kind of a four-wheel drift.

"We did some things this weekend that we probably will have to un-do going forward. I think we can do a little bit better going forward."

The Top-10 drivers on Sunday were all Playoff competitors. Three-time Vegas winner Brad Keselowski was third in the No. 2 Team Penske Ford. Hendrick Motorsports' Chase Elliott brought his No. 9 Chevrolet home fourth and Harvick's Penske teammate Ryan Blaney was fifth.

While the race's final laps came down to a battle between Harvick and Busch, it was actually Logano who led the most laps on the day – 105 of the 267.

[adinserter name="GOOGLE AD"]"We got shuffled out the back and then got to the outside of the 41 (Daniel Suarez) and didn't know I was there and he crashed our car," said Logano, whose No. 22 Ford suffered a lot of right side damage after it was squeezed into the wall avoiding Suarez.

"We just didn't have a chance to fix it as good as it needed to be and as good as it was before that,'' said Logano, who won the first stage.

"They fixed it as good as they could to recover with a top 10. Our car was so fast and I feel like we had a chance of winning it, but we just kind of got shuffled into everything."

On the plus side, Logano said, "Our car was fast. We were definitely capable of winning this thing, no doubt. We showed that. That is a positive."

It was a frustrating evening for many of the other Playoff drivers as well, several who worked through various obstacles from a flat tire for polesitter Clint Bowyer (finished 25th) to a crash for Ganassi driver Kurt Busch (39th) to an early race mechanical issue for JGR's Erik Jones (finished 36th).

First-time Playoff participant, 21-year-old Byron rallied to that seventh-place finish, but actually brought out one of the race's four caution flags on lap 182 after spinning.

Regular season champion and Las Vegas native Kyle Busch also had a busy day. He went two laps down early after brushing the wall. He made up enough positions on track and earned a spot back on the lead lap only to have problems with lapped cars as he raced forward.

The frustration was clear after he climbed out of his No. 18 JGR car on pit road, relegated with a 19th place finish even after he rallied back inside the top 10 at one point in the waning laps. The upside for him is the bonus points he received for winning the season title will carry over and balance some of the bad luck on Sunday.

"Should have run fourth probably, instead of 19th," Busch said on pit road, his disappointment obvious as he called out the driving technique from slower cars.

When reminded he gets to carry those bonus points, he said, "It's pathetic to have to lean on insurance. My premiums are going to go up."

The Cup Series moves to Richmond Raceway next week for the second race of the opening Playoff round. With the victory at Vegas, Truex has taken a three-point lead on Harvick in the championship standings. Logano is third, seven points behind Truex and Kyle Busch is fourth, 19 points off the lead.

Stage 2, Martin, you restarted 18th. You came back and drove through the field and won.

“It was a lot of fun tonight, and anytime you get a car like that you have fun. But we did have our challenges. It wasn’t easy for sure; we had to go to the back that one time for a pit road deal and work our way back to the front and then our car got off, and we lost some spots on that one run and luckily, we got a caution and was able to come in and fix it. We just had to do all the little things right. We went back and forth loose-tight, loose-tight and we just hit it right on that last run. I think the 4 (Kevin Harvick) missed it a little. It was so easy to do tonight. You’d be good one run and sideways the next and you couldn’t go anywhere. Then you’d be good; it was just back and forth. We hit it right when we needed. The 4 was really strong, but we took a gamble to have extra downforce and qualify 24th and it paid off tonight."

At one point in the final stage, Harvick was pulling away. At that point, what did it feel like and what made the difference?

“At that point, we were pretty good, and then five laps later, we got too loose and that was why he was able to drive away. That whole second-to-last run, I was babying it, trying to save the right rear to like the last five laps of that run. Then, we started being a little bit faster than him. I told Cole (Pearn, crew chief) if you tighten me up, we can get him. He got the car perfect, and I was able to hustle the car there at the end and get the lead and drive away."

You move to the next round with the win.

“These next two weeks are all about bonus points. This is big today to get six. Those are really important to get to Homestead."