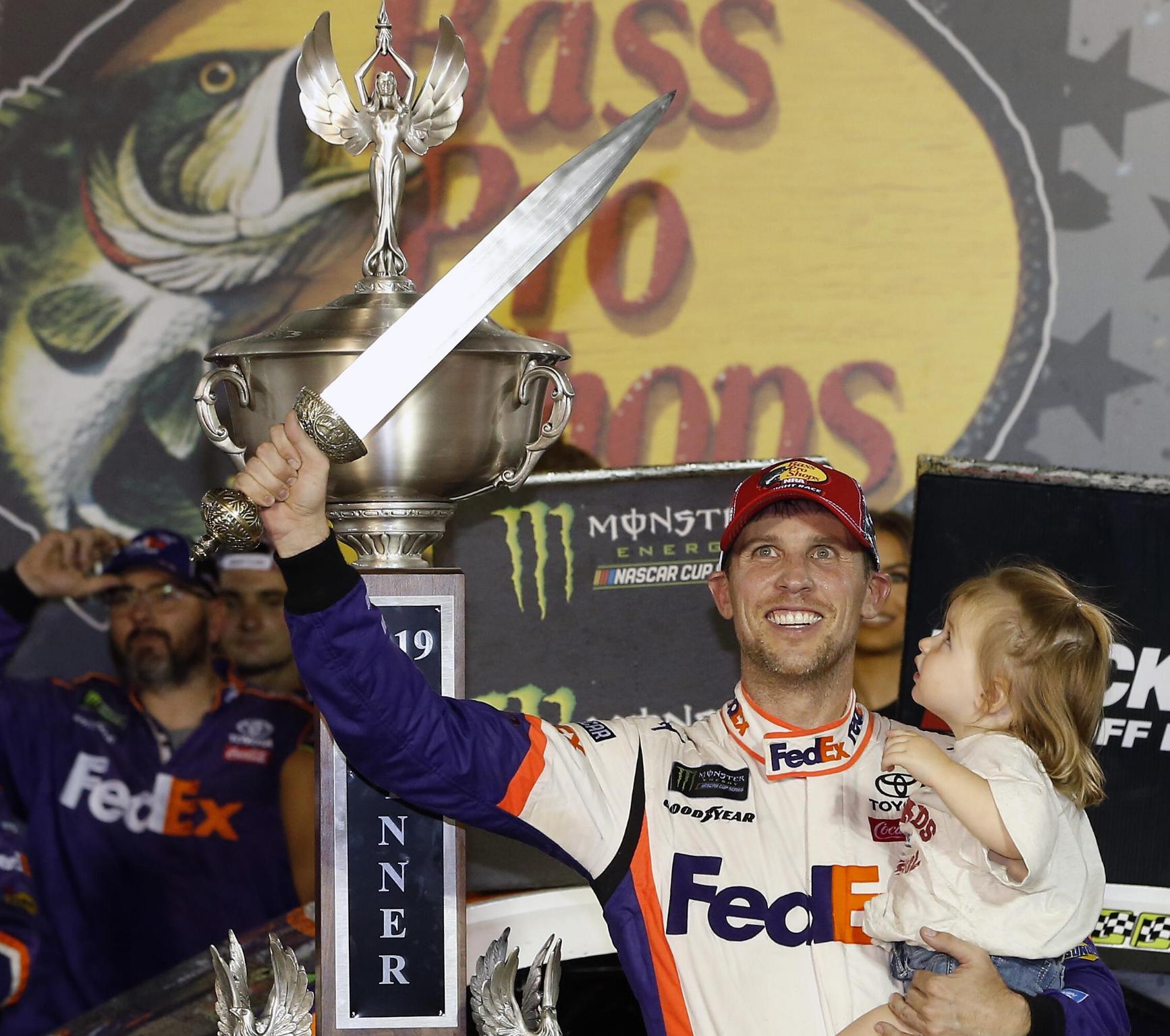 The first thing Denny Hamlin did after winning Saturday's Bass Pro Shops NRA Night race at Bristol Motor Speedway was apologize to the man he beat to the finish line in the 24th Monster Energy NASCAR Cup Series race of the season.

With 11 laps left in the grueling 500-lap event, Hamlin drove to the inside of Matt DiBenedetto and cleared him from the lead. Roughly three minutes later, Hamlin crossed the stripe .502 seconds ahead of the No. 95 Leavine Family Racing Toyota and handed DiBendetto his second major heartache of a difficult week.

[adinserter name="GOOGLE AD"]"I just want to say sorry to Matt DiBenedetto and (his crew chief) Mike Wheeler," said Hamlin, who won for the fourth time this season, the second time at Bristol and the 35th time in his career. "I hate it. I know a win would mean a lot to that team, but I've got to give 110 percent to my whole team. Just sorry."

The regret was heartfelt. On Tuesday, DiBenedetto learned he would not be returning to the LFR Camry next year, possibly to make room for the unquestioned talent of Christopher Bell. But on Saturday night, he put the distraction behind him and drove with the purpose and tenacity of a driver with something to prove.

Eight laps after a restart on Lap 388, DiBenedetto passed Erik Jones for the lead and held it for 93 laps. But with 28 laps left, after Hamlin passed Brad Keselowski and Chase Elliott to move into second place, DiBenedetto lost half his lead battling to put Ryan Newman a lap down. Contact between their cars tightened the handling of DiBenedetto's Toyota.

"Congrats to Denny. He raced hard. I've been a fan of his since I was a kid. To be racing door to door with him at Bristol, in front of a great group of fans… I'll try not to get emotional, but it's been a tough week. I just want to stick around and keep doing this for a long time to come. I love it. I love the opportunity. I'm not done yet.

"Something will come open. It's going to happen. I'm here to win. Something's going to come open. I'm proud of these guys. Thankful for my wife and fans for sticking with me. It's been a tough journey, a hard week. Cool for this team."

DiBenedetto ran consistently in the top 10 and his 93 laps led were a race high. Hamlin, on the other hand, had a roller-coaster race in which he started from the pole, damaged his No. 11 Toyota after contact with Jimmie Johnson's Chevrolet, lost a lap for an unscheduled pit stop on lap 189 for a loose wheel, regained the lead lap as the beneficiary under caution on Lap 248 and charged forward from 13th place after a Lap 260 restart to win the race.

After DiBenedetto's difficulty in passing Newman, Hamlin tracked him down relentlessly, running the top of the track before moving the bottom to make the winning pass.

"We had a great car that could move around. Came back from a couple laps down, and here we are."

Brad Keselowski ran third, followed by Kyle Busch, who started 31st and benefited from an opportune caution, shortly before he would have had to make a green-flag pit stop. Chase Elliott came home fifth, with Kyle Larson sixth.

Bowyer and Suarez finished seventh and eighth, respectively, but the stage points made the difference.

Jimmie Johnson's troubles continued on Saturday night. The seven-time champion started 30th and fell two laps down after contact with Austin Dillon and Hamlin. Johnson fought hard to finish 19th, four laps down, but he fell 26 points behind Suarez for the last Playoff spot.