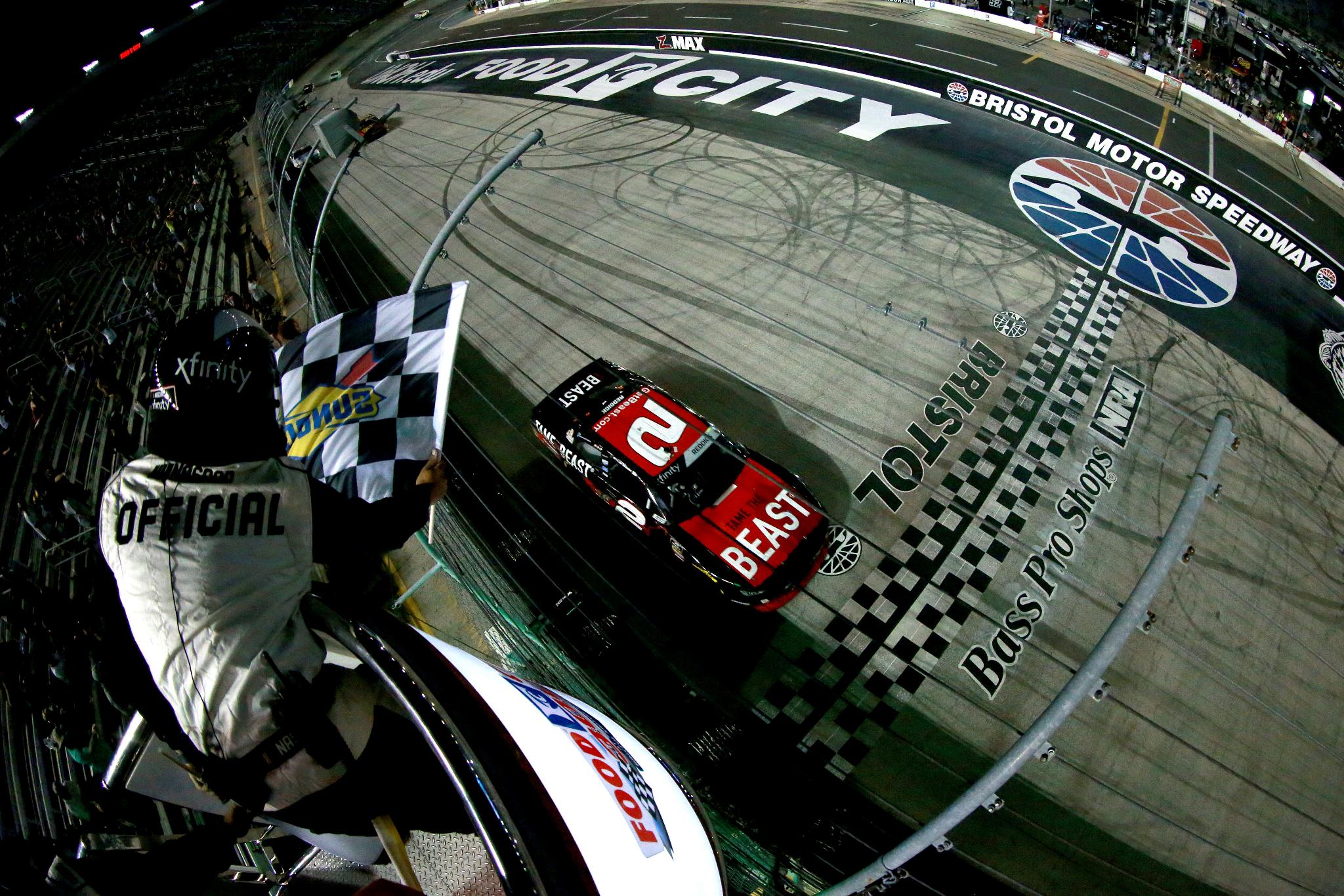 Tyler Reddick's No. 2 Richard Childress Racing Chevrolet had the word "BEAST" in big block letters on its hood Friday night.

The car was aptly named.

Even though Reddick had to come from the rear of the field twice in his Tame the Beast Camaro—once the result of a stiff penalty and once after a spin—he still needed a bit of luck to win the Food City 300 at Bristol Motor Speedway.

On older tires than Reddick had, Allgaier shot forward after a restart on Lap 287 of 300 and had a comfortable advantage until a flat tire sent him into the outside wall on Lap 289 and handed the top spot to Reddick, who had battled Brandon Jones and eventual runner-up Chase Briscoe for the second position behind Allgaier.

"I don't know (how we did this)," said the reigning NASCAR Xfinity Series champion, who picked up his fourth victory of the season, his first at Bristol and the seventh of his career. "I thought we made the wrong adjustment on the last (pit) stop, but we had a really fast Chevrolet. We had fresher tires than Justin Allgaier there. We came down pit road and we were just too tight and I thought we were done for.

"I don't know what happened. Everything just happened at the right spot. I fell back to fourth, and Jones hit the fence and then (Allgaier) had some sort of issue. As you can see, I'm speechless. I couldn't believe what was happening."

Minutes after limping home in eight place, two laps down, a crestfallen Allgaier was still struggling to process what had just happened.

"I'll be honest with you, this is the story of the year," said Allgaier, who led 131 laps, second only to the 137 of Kyle Busch, who fell out because of engine failure after winning the second stage. "We had a great car tonight. I don't know if we could have beaten the 18 (Busch) apples to apples, but when he fell out, I thought—especially at the end—we had the best car.

"I don't know what else to do, man. It's just so frustrating. These guys deserve a win. It's just a tire went down, and there's nothing you can do about it."

Reddick's adventurous evening started with the first 85-lap stage. After his No. 2 Chevrolet failed pre-qualifying inspection four times, Reddick was not allowed to post a lap in time trials, started from the rear of the field and immediately served a pass-through penalty that put him a lap down.

But Reddick earned a free pass as the highest-scored lapped car when NASCAR called the first caution on Lap 7 for Mason Diaz's crash on the backstretch. Back on the lead lap, Reddick hustled his car through the field, and on Lap 81 he was fighting Allgaier for the lead.

But Reddick spun in Turn 4 underneath Allgaier's Chevrolet, knocking the right rear of Allgaier's car into the outside wall. Brandon Jones sped past and scored the stage victory under caution.

Stage 2 was even more bizarre. Reddick worked his way back to second, passing Allgaier for the position with eight laps left in the stage. Kyle Busch was first to the green/checkered flag on Lap 170, but his engine had begun to fail with five laps left and gave up the ghost as he crossed the start/finish line.

That came long after championship contenders Christopher Bell and Cole Custer and Monster Energy NASCAR Cup Series regulars Erik Jones and Joey Logano all sustained serious damage to their cars in a multicar pileup on Lap 37.

Custer went three-wide on the top to pass the lapped car of Matt Mills, who moved up the track, pinching Custer's No. 00 Ford into the outside wall. Custer's car bounced off the wall and slammed into Bell's Toyota, sending both cars sliding sideways. With no clear lane, Jones plowed into Custer's car, and Logano's Ford slid into Jones' Toyota.

Both Logano and Jones retired from the race. Bell and Custer lost three laps and four laps, respectively, while their teams hustled to repair their cars.

"Typical Bristol crash," Logano said. "You see them wrecking in front of you, and you're on the brakes as hard as you can, and they just keep piling in, and you can't stop quick enough. Some of that comes from a poor qualifying effort and from that you get caught up in things.

"I thought we were OK. Even saying that, we were still up to seventh or eighth. We weren't that far back from starting 19th. We were picking our way through there, but it just happens."