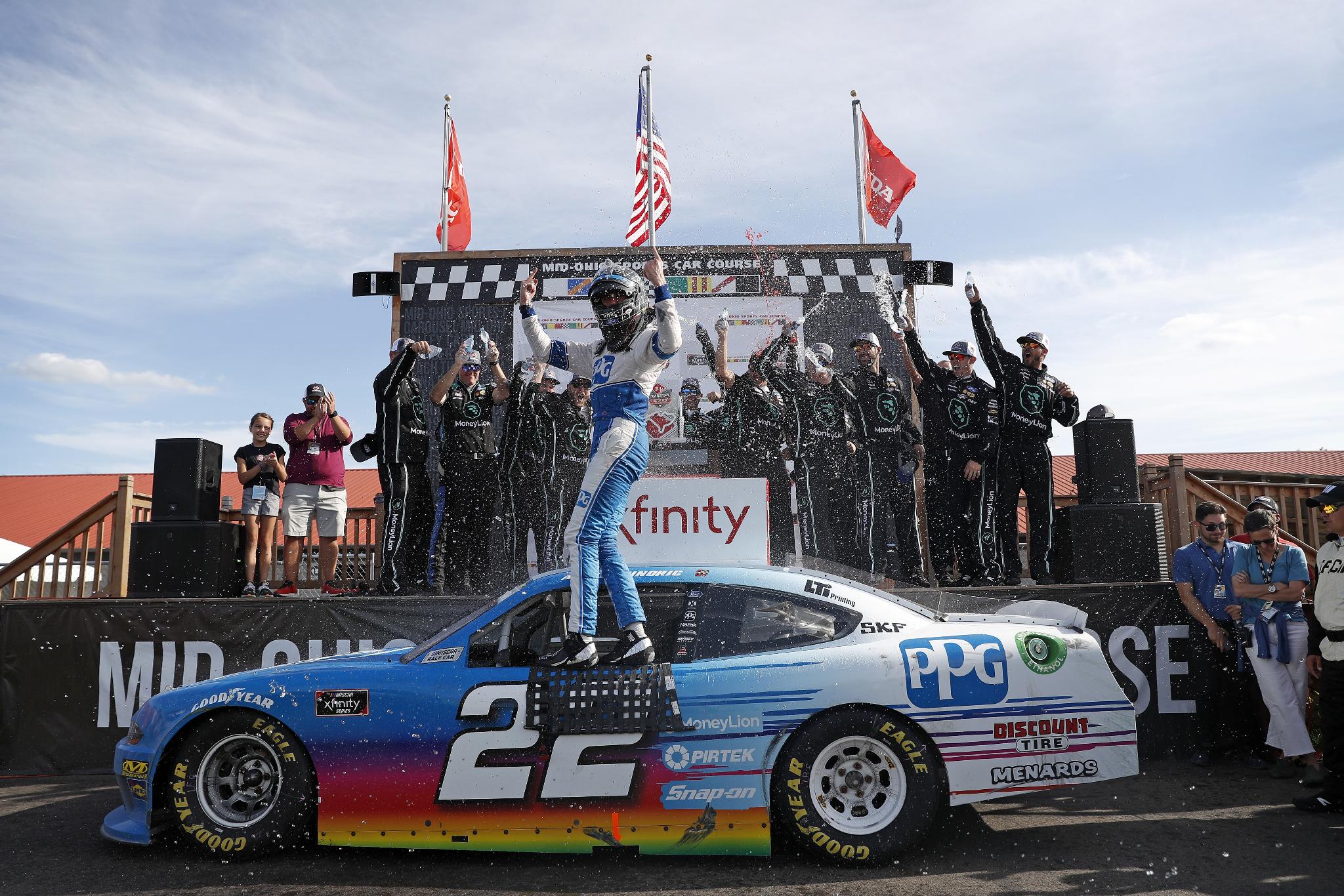 The 20-year old Cindric had just celebrated his career first win last week at the iconic Watkins Glen International road course and with a huge smile, effusively wondered what may be next for his No. 22 Team Penske Ford as the series heads to the half-mile Bristol Motor Speedway next week. Should he win at Bristol he would become the first driver in NASCAR Xfinity Series history to earn his first three wins in consecutive races.

"It feels so good," a smiling Cindric said after climbing out of his Ford Mustang. "These guys are the best and thanks for bringing me a great car again this year. And hell of a job by Christopher Bell keeping me honest all day.

"It feels good, two in row and going for three at Bristol. I’ll probably go crazy if I win there. Should be a lot of fun. This is great momentum for our group."

Cindric is the seventh different winner in seven Xfinity Series races at the 2.258-mile, 13 Turn Mid-Ohio course and his day included impressive feats of both maintaining the lead and high pursuit to reclaim it between pit strategies. He won the pole position by a full three-tenths of a second and held "favorite" status before the green flag even dropped.

Much of the race was spent negotiating re-starts and high speed turns with Bell on his bumper or at his door – as well as fending off another road racing star Jack Hawksworth, who actually won in class in an International Motor Sports Association (IMSA) race at Mid-Ohio already this year and made his series debut in the Joe Gibbs Racing No. 18 Toyota.

Hawksworth started from the outside pole and challenged the frontrunners for much of the race, eventually finishing 15th and leading five laps. He actually won the second stage, which finished under caution – one of six yellow flags for 17 laps on the afternoon.

"I enjoyed it, it was a lot of fun," Hawksworth said after the race. "I was having a lot of fun out there. I had a great time and would like to come back."

Cindric led 46 of the 75 laps and Bell, the driver of the No. 20 Joe Gibbs Racing Toyota, was the only other driver in double digits out front. Bell is second in the championship standings to Tyler Reddick, who finished fourth Saturday. And after the race, the short track superstar conceded he is getting better on the road courses. Bell was second last week to Cindric as well.

"I don’t know about that, but I do know we’re going to Bristol next week and I can’t wait," he said smiling about the road course prowess he’s shown with the back-to-back runner-up finishes.

"The last two weeks have been really great for us points-wise and road racing isn’t my strong suit."

Chase Briscoe, defending race winner Justin Allgaier and rookie Noah Gragson persevered for a good day as well. Briscoe won Stage 1 and finished seventh. Allgaier, the defending race winner, rallied to a sixth-place finish after a couple of off-track excursions. And the rookie Gragson, impressed with a fifth-place finish after also being involved in some tight, full contact racing as well.