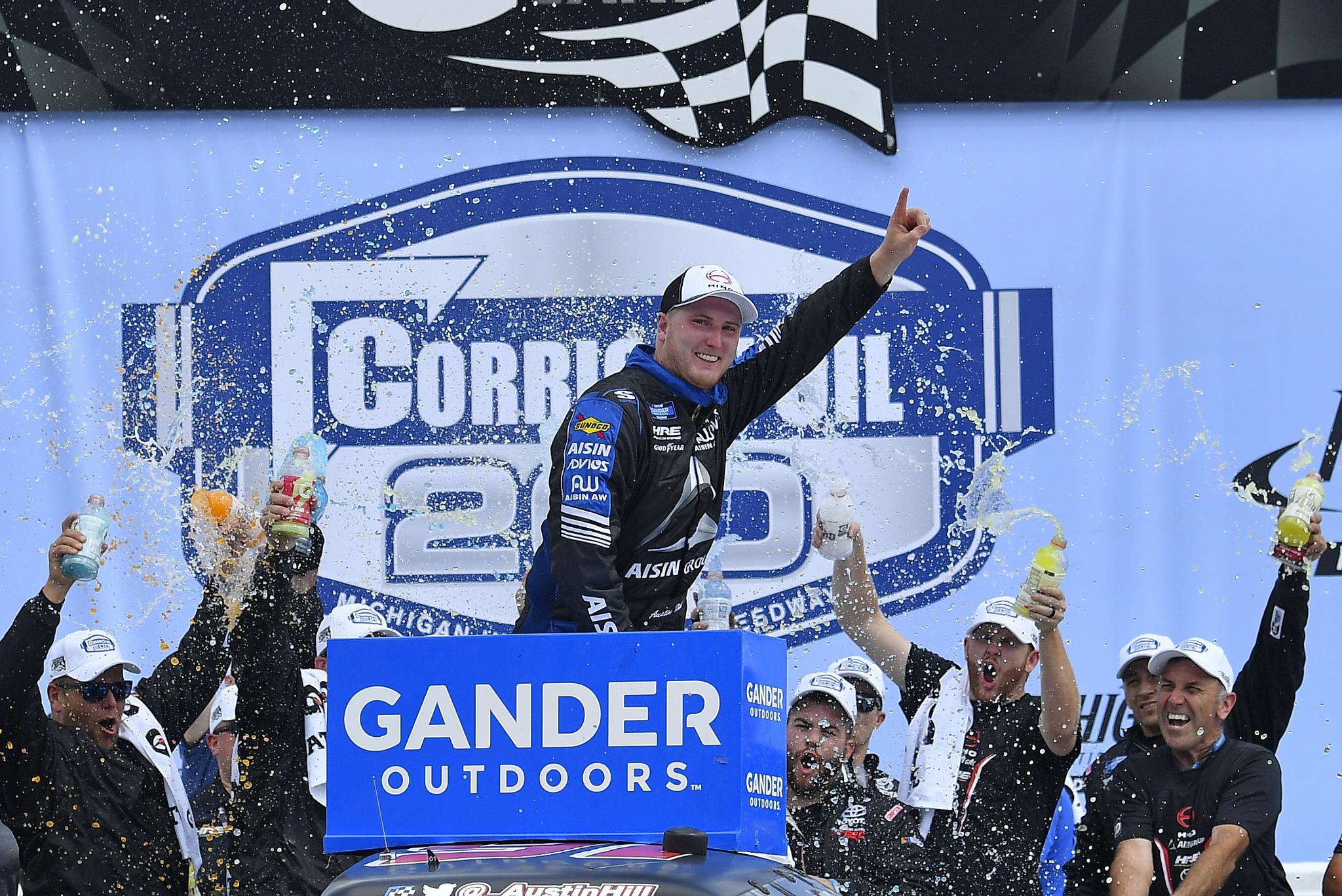 With Hill's second victory of the season, Crafton has a chance to run for a third title, having clinched the final spot in the series Playoffs on points.

The outcome—and Crafton's fate—weren't decided until the final moments of a race that went five laps beyond its scheduled distance of 100 laps. For two nail-biting laps of overtime, Sheldon Creed chased Hill, edging ever closer over the last two miles.

But Hill had the advantage off the final corner and beat Creed to the finish line by .125 seconds, denying Creed the Playoff spot that went to Crafton. A victory by Creed would have knocked the two-time champion out of the postseason.

"It's huge," said Hill, who rebounded from a last-place finish in the previous race at Eldora Speedway. "We've had a struggle these last four of five races. We just keep having issues and just can't finish these races."

[adinserter name="GOOGLE AD"]Hill's winning No. 16 Toyota was brand new, unveiled for this race—appropriately since Hill was racing at Michigan for the first time in the series.

"When we unloaded, we had to work out some bugs in it, but we got it driving really good," said Hill, who also won the season opener at Daytona. "I was really happy with the speed of it. Man, this race was crazy."

A nine-car wreck moments after a restart with four laps left in regulation set up the overtime. Tyler Ankrum, the leader at the time, spun his tires, and a well-intentioned push Crafton turned him around and started the melee. The wreck collected Playoff hopeful Todd Gilliland, who had driven up to eighth after pitting for tires on Lap 88.

Needing a victory to qualify for the postseason, Gilliland had led 14 laps to that point, but the wreck ended his hopes.

Similarly, Ben Rhodes saw his Playoff chances fall apart when he had to pit under green with a cut tire with 21 laps left. Rhodes had led 15 laps before his ill fortune. He and Gilliland finished 23rd and 24th respectively.

Crafton had some nervous moments before he clinched his Playoff berth. After a restart on Lap 70, three-drivers on win-or-bust missions—Gilliland, Rhodes and Harrison Burton—were running first through third.

Enfinger clinched a spot in the Playoffs when he took the green flag. By the end of the first stage, he had locked up the regular-season title—and accompanying 15 Playoff points—with a sixth-place finish.

Crafton, the only driver with a remote chance to catch Enfinger for the regular-season championship, had to start from the rear of the field because of an engine change. The driver of the No. 88 ThorSport Racing Ford climbed to 10th by the end of the first stage, but by then, his chances of unseating his teammate were gone.

Polesitter Ross Chastain won Stage 1 wire-to-wire, but a three-truck accident on pit road cost him dearly. While exiting his stall under caution on Lap 23, Johnny Sauter collided with the No. 9 Chevrolet of Codie Rohrbaugh, knocking Rohrbaugh into the right side of Chastain's Chevrolet.

Chastain, Sauter and Rohrbaugh all spent extra time on pit road dealing with the damage, but Chastain was the primary victim, his race over.

"It was gut-wrenching, for sure," Chastain said after leaving the infield care center. "It was a shame, but that's part of racing. They can't all be great days… It's tough to lose a race with a truck like we had today."