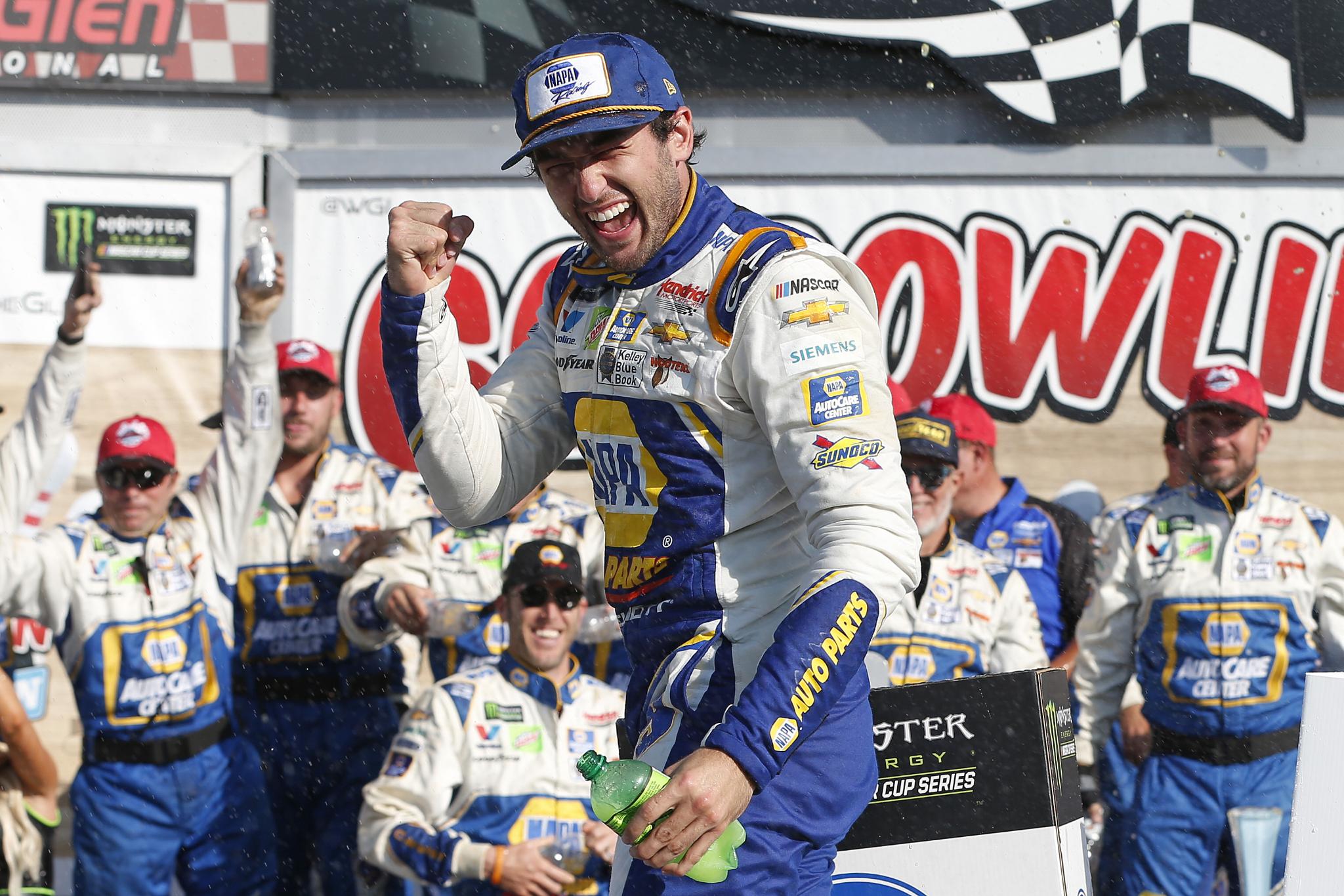 It was a striking case of déjÃ  vu.

In a replay of Last year's GoBowling at the Glen, Martin Truex Jr. chased pole winner Chase Elliott lap after lap around the 2.45-mile road course, using everything in his arsenal to try to deprive Elliott of his second straight victory at the track.

Nothing worked for Truex, who crossed the finish line in the wake of the winning No. 9 Hendrick Motorsports Chevrolet, .454 seconds in arrears.

Elliott logged his second victory of the season, his second at The Glen and the fifth of his career, becoming the first Chevrolet driver to win multiple races this season.

"This is wild," exulted Elliott, who outran Truex last year at WGI to pick up his first Monster Energy NASCAR Cup Series victory. "Thank you, guys, that was pretty awesome. I've never been so far from home and thought I was at my house. Thank you. What a day!

"We had such a bad fast Camaro, and we stayed mistake-free. Martin was a little quicker those last two runs, but track position was king, and I didn't mess up in (Turn) 1 this time, so that was good."

In fact, nothing went wrong for Elliott until he ran out of fuel after his celebratory post-race burnout—same as last year.

"Sorry I ran out of gas again," Elliott said.

Elliott swept the first and second stages and led 81 of the 90 laps, surrendering the top spot only during pit stop cycles. Truex, who led one lap by pitting one circuit later than Elliott on Lap 60, got tantalizingly close to Elliott's rear bumper at several points during the final 25-lap green-flag run, but the 2017 series champion couldn't mount a serious threat to overtake the winner.

"I tried to do all I could," Truex said. "Chase did an excellent job, just not making mistakes, and really all I could do was get to two car lengths—one-and-a-half at the closest in braking—and just try to force a mistake. But he hit his marks. His car was really fast in the key areas that you need to be, leaving a few of the key corners.

"I just couldn't get a run on him, and we just were kind of stuck there. Unfortunate, but our Bass Pro Camry was really, really fast today. We passed quite a few cars there that were fast and finished up front, just couldn't pass that last one."

Denny Hamlin ran a consistent-if-distant third, 11.229 seconds behind Elliott at the finish. Erik Jones started 14th and came home fourth, posting his fourth straight top-five result and solidifying his position in the standings with four races left before the cutoff for the Playoffs. Jones is 13th, 54 points to the good.

Scoring points in both the first and second stages, Jimmie Johnson finished 19th in the debut of new crew chief Cliff Daniels and made up 12 points on Ryan Newman, who ran 25th after a flat tire forced an unscheduled pit stop, and a subsequent loose wheel compounded the problem. Newman and Johnson head for next Sunday's race at Michigan tied for 16th, the last Playoff-eligible position.

THE PERFORMANCE OF A LIFETIME. NOT ONLY DO YOU GET THE POLE, BUT YOU LED 80 OF THE 90 LAPS. CHASE ELLIOTT, YOU HAVE WON AT WATKINS GLEN AGAIN.

“Thank you guys, that was awesome. I’ve never been so far from home and felt like I was at my house, so thank you. You all are awesome. What a day! We had such a fast NAPA Camaro and these guys called a great race. We just stayed mistake free and Martin (Truex Jr.) was a little quicker I felt like those last few runs, but the track position was key and I didn’t mess up into Turn 1 this time, so that was good. Just a huge thank you to everyone that makes this happen. Mr. Hendrick is here today and just a lot of people that have gotten me to this point. I wish my mom and my grandmother were here today, but I can’t wait to see you guys when I get back home. Love you."

THREE BURNOUTS, YOU REALLY PUT A SHOW ON FOR THESE FANS. THEY ARE OUT HERE SUPPORTING YOU EVERY SINGLE TIME. WHAT DO YOU WANT TO SAY TO THEM?