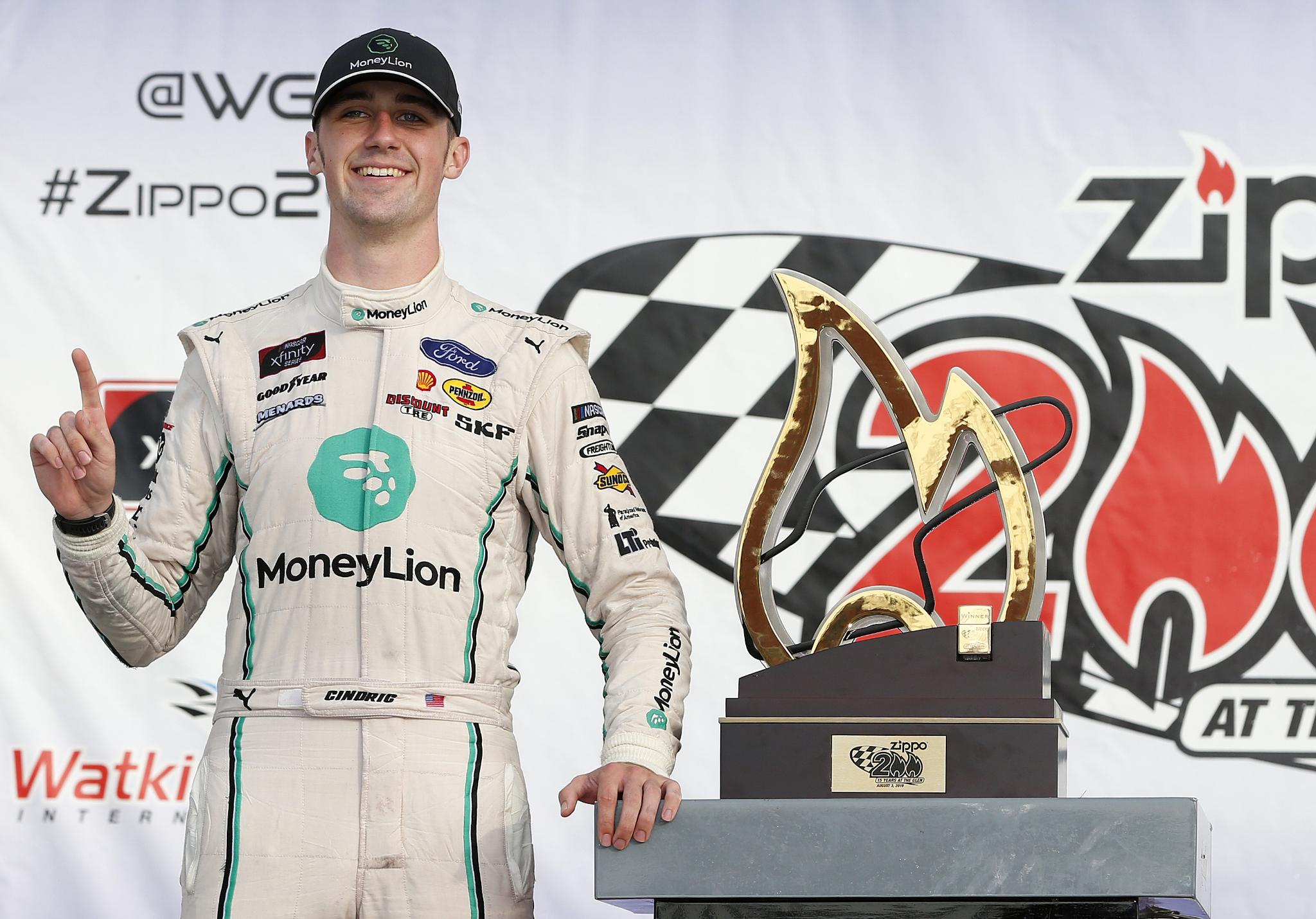 Opportunity knocked for Austin Cindric after a mechanical failure knocked Kyle Busch out of Saturday's Zippo 200 at Watkins Glen International.

And after Cindric and road course ace AJ Allmendinger traded knocks on the final two laps of the NASCAR Xfinity Series race, Cindric—on fresher tires—emerged the winner for the first time in his career.

Following post-race inspection, Allmendinger's No. 10 Kaulig Racing Chevrolet was disqualified for a rear height violation, dropping Allmendinger to last place in the running order. But fans left the track with the memory of an intense battle over the closing laps.

When NASCAR called the sixth caution on Lap 69 of 82, Brian Wilson, crew chief on Cindric's No. 22 Team Penske Ford, made a courageous call that later proved decisive. Wilson brought Cindric from the lead to pit road for fresh tires, dropping the 20-year-old driver to ninth in the running order for a restart on Lap 73.

An immediate caution for a pile-up in Turn 1 left Cindric in sixth for the next restart on Lap 76. When Christopher Bell was knocked sideways in Turn 2, and Justin Allgaier and Tyler Reddick lost momentum while fighting for the second spot, Cindric charged around the outside into second place and chased Allmendinger.

It took three laps for Cindric to trim Allmendinger's advantage from 1.714 seconds to .521 seconds, and from that point, the game was on. On Lap 81, Cindric nudged Allmendinger up the track in the carousel and took the lead. Allmendinger returned the favor approaching Turn 7 and regained the top spot as Cindric was forced wide.

But Allmendinger entered Turn 7 too wide and Cindric drove back underneath to lead Lap 81. On the final circuit he pulled away to win by 1.168 seconds and clinched a spot in the Xfinity Series Playoffs.

Cindric and Wilson had discussed the possibility of a late pit stop before the race.

"I've been on the other side of it," Cindric said. "(Bell) had been pretty good all day, so it was going to be hard to hold him off depending on which lane he had on the restart."

The only thing that went wrong was Cindric's celebratory burnout. But it was helpful that pole winner Kyle Busch had critical issues during the race itself.

"I was kind of bummed," Cindric said. "I broke the clutch out of it trying to do a burnout, so my guys are going to have to do a little extra work and I'll have to buy them an even bigger dinner. We talked before the weekend, and we knew something would have to go wrong with (Kyle Busch), but I'm so blessed to be able to be here."

After winning the first stage and pitting thereafter, Busch had just passed Ryan Blaney for the lead entering the inner loop when the upper control arm on the left front of his No. 18 Toyota broke. Busch retired from the race and opened the door for Cindric.

"As soon as KB went out, everybody's eyes opened up, and it was like, 'OK, here we go,'" Allmendinger said. "When you take tires like that, it's all about getting lucky. If you get a restart where you get by a chunk of cars, it makes that strategy work—and he did it.

"Congrats to Austin. He went in there and nudged me, and that was fair. I nudged him—you race how you get raced—but that's what racing's all about. He deserved it. He was on it the whole race."

With the Allmendinger disqualification, Bell inherited the runner-up spot, followed by Allgaier, who traded hard knocks with Ross Chastain, eliminating Chastain from the race after hard contact with the barrier in the carousel. Blaney and Reddick ran fourth and fifth.