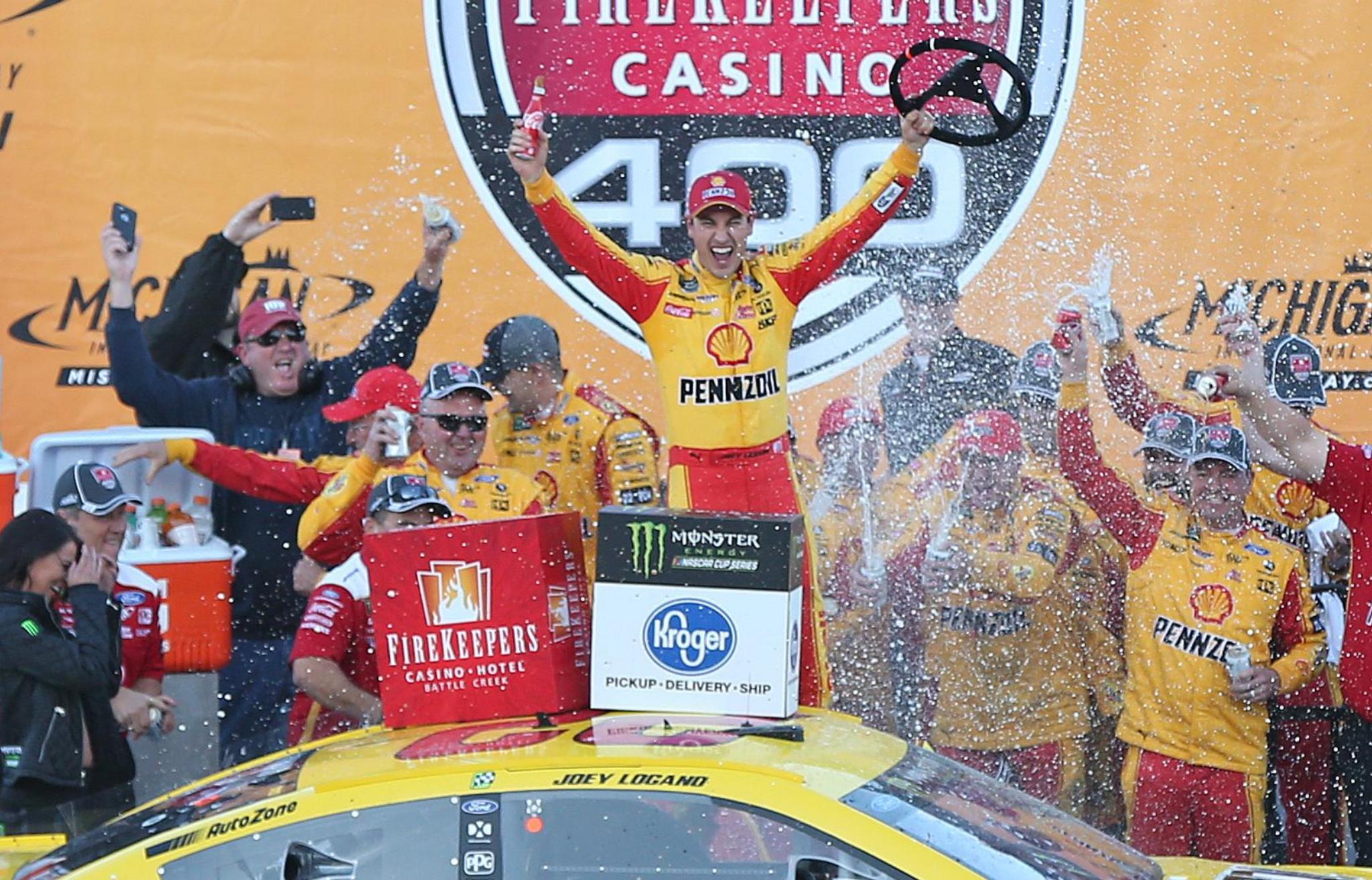 When Joey Logano starts on the pole at Michigan International Speedway, it usually means he ends the race in the same position – out front. It happened again in the Monster Energy NASCAR Cup Series FireKeepers Casino 400 when he held off Kurt Busch and Martin Truex, Jr. to win in overtime.

Logano, Truex and Busch were ready for a green flag shootout before a caution with four laps to go because of Erik Jones suffering a flat tire and spinning. The yellow flag forced overtime and two laps of white knuckle driving. Logano got the jump and pulled out to the lead, but Busch was closing in from the third position. As they came to the finish line, Logano went to the middle and Busch dove low. In the end, it was Logano taking the checkered flag by 0.147 seconds.

“This one, outside of the crown jewel events I consider this the biggest race to win because it is Ford Motor Company’s backyard and Roger Penske’s backyard," Logano said. “The area has a lot of diehard Ford fans, fans here in the grandstands right now and it feels great to represent that company and get to victory lane today."

[adinserter name="GOOGLE AD"]It marked Logano’s third career win at Michigan International Speedway and all three have been when he started on the pole. More importantly, it meant that Ford Performance retained the Michigan Heritage for the third consecutive race.

“This is a big deal for us at Ford Motor Company, all our employees and fans around the world," Ford Performance NASCAR Program Manager Pat DiMarco said. We had dinner on Thursday night, all the drivers with Edsel Ford who invited all of us up to Henry Ford’s original estate. We had a private dinner and it was nice to be there with a Ford family member and he reminded us all that we win 50-percent of the races here at MIS. He said he wanted to bring this trophy home again and we did. I think Joey out there in victory lane said we are at 51-percent now for Mr. Ford."

Logano started the race on the pole and quickly showed he was the car to beat. But he was never able to get away from the field. Logano led the first 20 laps before the first competition caution because of overnight rain.

Logano and Kevin Harvick were the class of the field early. Harvick suffered a slow pit stop during the first pit stop. And then with nine laps to go in the first stage he had a left tire issue forcing an unscheduled pit stop. He came out of the pits a lap down.

It has never been easier to purchase tickets and camping at Michigan International Speedway in 2019. Fans can visit www.mispeedway.com or call 888-905-7223 to get the best deals. Grandstand tickets start at $39 for the Consumers Energy 400 on Aug. 11.

Any guest who purchases a 12 and under ticket will automatically receive a free kids Pit and Driver Introduction Pass courtesy of Henry Ford Health System. Kids can experience pit road on Sunday morning, sign the start/finish line and view the cars and teams up close on race day. Kids will also have access to pre-race ceremonies, including driver introductions.

Nestled in the lush Irish Hills of Southeastern Michigan, Michigan International Speedway is NASCAR’s Most Entertaining Track. It has been the love of NASCAR racing and the thrill of a great time for race fans and drivers alike for 50 years.

* Race extended to 203 laps due to overtime.