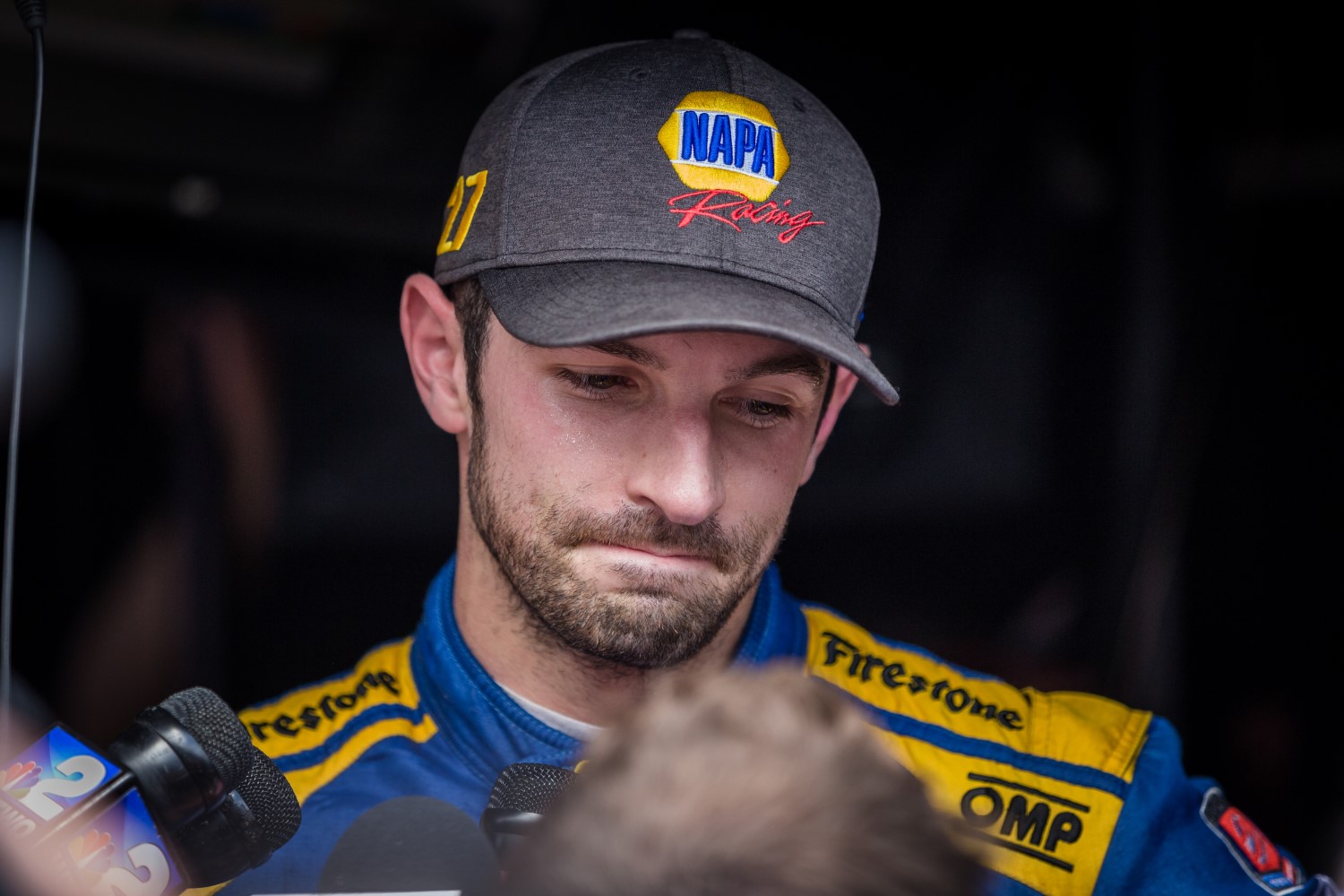 Josef, coming off the Indy 500, how is getting back into the rhythm here?

JOSEF NEWGARDEN: Yeah, it's been OK. I mean, I think we're all trying in a way to stay on the island this weekend. I think everyone is pretty worn out, all the mechanics, engineers, a lot of the drivers are. It's a big month for everybody.

[adinserter name="GOOGLE AD"]A little worn out, but pretty good. Nice to be back in a regular weekend that's a little bit more low-key, which is nice. I think we had a decent start today, not 100 percent sure where we stack up. I think we're a little bit further back than where we were on that final red tire run. Some of the Andretti boys look really good. Some of the Ganassi guys look really good. We'll see.

I think we're in that top-five mix. In the pecking order we're probably more towards the back of the top five. A little bit of work to do. So far not too terrible.

THE MODERATOR: We'll open it up to questions.

Q. New right side reds here. Do you think there will be a little bit less degradation?
JOSEF NEWGARDEN: I think it will be twice as bad is what I've noticed. I'll be surprised if people make half a stint on reds. It's just what I saw.

But it's Friday. Maybe Saturday it will be different. They didn't seem great for longevity. Yeah, it will be interesting. They definitely feel like they have grip, but they're not conducive to long running, it doesn't seem.

Half a second up on the field or more on that practice session. What does it mean? Does it mean anything yet?

ALEXANDER ROSSI: Well, no, considering most of the guys didn't get around on reds, kind of irrelevant. I think the team obviously carried on from last year. We had a good car last year. Ryan (Hunter-Reay) was obviously very quick, Marco (Andretti) was quick, all four cars were. To be able to pick up where we left off is a good start.

Q. I think you said after the first practice you really liked the bumpy track, make it work to your advantage. What is it about the bumpiness that helps you set up your car?
ALEXANDER ROSSI: I don't think I said I liked it. I said I didn't hate it anymore. When I first came here, it was quite a shock from all of the other street tracks we come to.

Yeah, it's definitely a unique place. You have to learn to love the bumps. I think that's probably what you heard me say. Kind of figure out ways to get around them. There's certain bumping in braking zones and in corners that if you have a slightly different line or approach with your driving style, you can mitigate the impact that the bumps have.

I think you can see a bit of separation at a place like this just for small driving style differences, which is great. At the end of the day, even with all that being said, we saw it's so close at the top, close throughout the whole field. Pretty normal of Indy car racing.

Q. The tires, might rain tomorrow, supposed to be clean on Sunday. Are you guys to go to be practicing on different sets to get a feel for it?
JOSEF NEWGARDEN: I think practice is over. I don't think we have much time. We go straight to qualifying, so…

But we'll see. It was supposed to rain the entire day for the Indy 500 and we didn't see a drop. We'll see what tomorrow brings.

We'll be prepared. It's normal to mix it up. You got to run both compounds in the race. You have to be kind of good on both tires. But it's going to be interesting. I think there's a curve ball with the reds this year. We'll see how it shakes out.

THE MODERATOR: It's the amount of time.

ALEXANDER ROSSI: The amount of time. It's all I know here which is why I don't know how to answer that.

I haven't had too much of an issue with it. It's very similar — I guess it's not similar at all. You're trying to be fast in every session, right? You don't think about it too much.

It's obviously hard around here to get a lap. Guys are gapping. You have to make sure you set your gap early enough and hopefully you don't get impeded.

JOSEF NEWGARDEN: I would agree. I don't have a big problem with it. More like junior car qualifying, to be honest. Go out for one session, it's one session. Same when it's a three-round system, you got to be quick each round. You only have one round this time for the weekend, but it's not really a big deal.

Q. I know you guys have done this a lot, but coming off of Indianapolis 500 oval, speed, everything different, does it take you a few minutes to reacclimate to what you're trying to accomplish?
ALEXANDER ROSSI: I think the biggest thing is mentally getting back to explaining things for me. I'm actually struggling right now. You're so used to kind of a very specific way of thinking, a thought process, right? It's around the oval and the speedway.

You come here, it's like getting back on the bike from the muscle memory. Going fast isn't that big of a deal. When the engineers are talking to you, ‘What's it doing?’ You're trying to get out of the mindset of the oval car in a way. That for me is the biggest thing today. I feel stupid with words.

Q. Alex, you came here (three) years ago as (Indy 500) winner, this year second place. Is it nice for everybody but the winner to come back, get right back in the car the next week?
ALEXANDER ROSSI: No, I think we're all pretty jealous of Simon (Pagenaud). I'd prefer to be in his shoes.

Q. Either of you go back and review the Indy 500 yet?
ALEXANDER ROSSI: No.

JOSEF NEWGARDEN: Yeah, I watched the last 12 laps, then I shut it off. I knew what happened.

JOSEF NEWGARDEN: I think most of us go back and watch. You want see it back, what happened. I didn't understand the Sato deal till I watched it back. Where the hell did he come from? Does anyone know what happened there? The yellow came out when he pitted. He made probably like 10 positions. I was really confused until I saw it.

Q. Alex, the word is 'methodology', I think.
ALEXANDER ROSSI: Thank you.

Q. Did you ever go back and watch the 2016 Indy 500 over again?
ALEXANDER ROSSI: No. We're on Detroit, so that's what's important. Going to go try to win two races. There's weather potentially coming and we'll see what happens.

Q. How do you feel about this race, neither one of you have had a win, one podium between you on this surface? Is this a place that suits your style or just the way the results have been?
ALEXANDER ROSSI: Probably not.

JOSEF NEWGARDEN: I like it here, I do. I like this track a lot. I think the tricky bit for us is turning the tires on. It's so difficult here with the concrete surface to make the tires work and get them in a good operating window. I think it's tough for everybody, but it seems like some cars do a better job of it. I think that's hurt under the circumstances here in the past.

I like the track a lot. It's a very fun track, very challenging, very technical and physical. It's quite a shock coming from Indy, the physicality. I enjoy it a lot. It's a really good track, really unique for a street circuit the way it flows, got a little bit of everything, high speed, low speed, switchbacks, tight corners. It's a fun track to try to get right.

Q. Coming off of Indy, anything you guys do to recover differently than you would do at a normal road course to try to get yourself back into the mental place?
ALEXANDER ROSSI: No. You kind of go about it the same way you would every other race weekend. I take Monday off, then you train Tuesday, Wednesday, Thursday, do your normal leadup into the race weekend.

To be perfectly honest, Indy isn't really that physical. For us, I mean, I think most of the guys here, they're pretty fresh from that aspect. Yeah, it will be the same for Texas. You kind of recover on Monday, do your normal lead-in.

This stretch is always hard for everyone. I think the biggest challenge is for the mechanics. We got to give a lot of appreciation and respect for those guys, the hours they have to work, the things they have to do to turn the cars around, makes our jobs pretty easy.

Q. Has the track changed from last year? Same amount of bumpiness? Because it's a doubleheader, you still only get four sets of the red tires. Some drivers have done two stints. From what I'm hearing, you're not that fond of the tires. If it doesn't rain tomorrow, likely there are going to be cautions, come in, pit, get off the reds. What would be your preference in terms of running the reds and the blacks?
JOSEF NEWGARDEN: I mean, four sets is probably too many this weekend of those tires (laughter).

I don't know. We're going to see. This is Friday. Things change. I would be shocked if it changed dramatically. But I think you'll see a pretty black race. I think it will be mostly black tires all the way through.

ALEXANDER ROSSI: I think the one thing you got to keep in mind, when you see guys in the past do kind of long runs at the end of Practice 2, it always looks worse than it is. I don't know if that's the case this weekend.

Very much in the past, you get into the race, you're able to make them last longer because there's rubber that's down that wasn't there. Street track, the evolution of the grip kind of ramps up every single session.

It's not good right now. But there is a possibility it could be better. It's just understanding how much it is going to be better, if at all, then how much of a risk you can take.

Q. Alexander, what are the emotions when you come off a tough loss in Indy, can't probably try to do too much, but you obviously feel motivated to get a win here this weekend?
ALEXANDER ROSSI: No more than any other weekend really. The past is behind us. I haven't really thought about it since, like, Monday, like I said. We've moved on.

We're focused on Detroit. Trying to maximize the weekend here. From a points perspective, it just as important as the 500. This is a really important stretch of races in the championship. Now that Indy is behind us, it's really our only focus.

THE MODERATOR: Thanks, gentlemen.