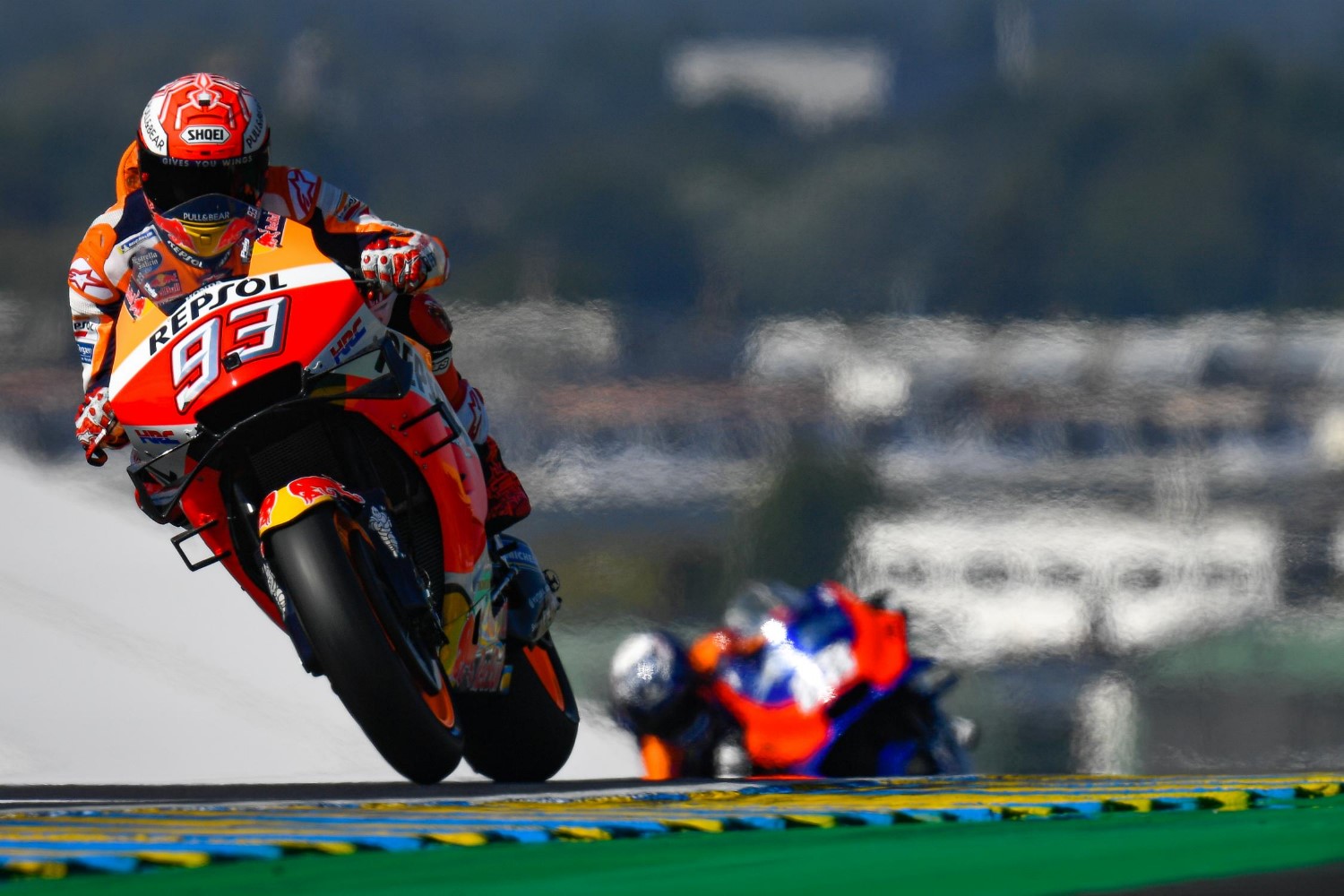 There was huge drama on the warm-up lap before the race had even begun. On the brink of his 200th GP start, Karel Abraham (Reale Avintia Racing) and Team Suzuki Ecstar’s rookie Joan Mir both crashed – separately – heading into Turn 3. Mir was able to get back to the pits and get back out to join the race, but Abraham was black flagged for coming out of pitlane after the leader had crossed the line on Lap 1.

From the start, poleman Marquez and second place Petrucci went toe-to-toe into Turn 3, with the number 93 just getting the better of the Italian as everyone made it through the tricky left-right in one piece. It was your top three on the grid who held the top three positions in the race as Marquez started to edge out a half-second gap on the field.

But Jack Miller (Pramac Racing) then forced his way past his fellow GP19 rider Petrucci and immediately locked his radar on the back of Marquez’ Honda. And it wasn’t long before the 0.5 gap was bridged as Miller slammed in the fastest lap of the race, before chucking it up the inside of Marquez at Turn 3 on Lap 5. Two laps later Marquez went to return the favor, both riders ran slightly wide, Miller got the cutback to lead but Marquez swept under the inside of the Ducati at Turn 6 as Dovizioso and Valentino Rossi (Monster Energy Yamaha MotoGP) joining the fray at the front.

[adinserter name="GOOGLE AD"]However, with Marquez back in the lead, he began to get into a rhythm. A tenth here and a tenth there slowly stretched the gap out to half a second as Marquez posted the fastest lap of the race: hammer down for the Championship leader.

And the gap to Miller and Dovizioso kept on rising and as Marquez ticked Lap 14 off, the gap was over a second as it soon became a race for second between the three Ducatis, with Valentino Rossi (Monster Energy Yamaha MotoGP) not completely out of the equation in fifth. With 11 to go Marquez was two seconds up the road as Dovi made his move past Miller for second, the Australian running wide at Turn 7, with Petrucci beginning to build up his speed and close down the podium places.

Petrux was right with Miller and Dovi and with eight laps to go, the number 9 was past Miller as one of the red Bologna bullets set his sights on his teammate. With five laps to go Petrucci went for P2, Turn 3 the corner, but he ran wide and Dovi was able to hold the position – just. The swapping and changing continued in the latter laps but Petrucci couldn’t make a move stick. Meanwhile, Marquez had built up nearly a four-second gap as he cruised round to claim his third win of the season, equaling teammate Jorge Lorenzo’s premier class win tally (47) – the joint-fourth highest. Dovi took an important second to hold off Petrucci as the number 04 rider drew level with Mick Doohan on career Grand Prix podiums. Petrucci returned to the rostrum for the first time since his P2 in Le Mans last season.

Miller held off Rossi by a tenth to earn a solid fourth in France, ‘The Doctor’ couldn’t quite keep tabs on the podium battle in fifth. It was a best result of the season for Red Bull KTM Factory Racing and Pol Espargaro, the Spaniard had looked strong all weekend and he proved it in the race, a P6 for him went down very well with the Austrian factory – something for them to build on for sure. Franco Morbidelli (Petronas Yamaha SRT) took eighth to finish just over a second clear of his teammate and home hero Fabio Quartararo. The Frenchman made a bad start and sat outside the points in the early stages, but some great race pace from the mid-point onwards means fast Fabio takes home a very respectable top ten from France.

Cal Crutchlow (LCR Honda Castrol) lost out to Quartararo in the latter stages, the British rider finished ninth. Team Suzuki Ecstar’s Alex Rins loses out in the title race after a P10 finish, a P19 start really hampering the Spaniard’s French GP as he slips from second to third in the standings. Jorge Lorenzo (Repsol Honda Team) earns his best Honda result in 11th, with Aleix Espargaro (Aprilia Racing Team Gresini), home favorite Johann Zarco (Red Bull KTM Factory Racing) and the two Red Bull KTM Tech 3’s of Hafizh Syahrin – the Malaysian’s first points of the season – and Miguel Oliveira completed the points. Oliveira being handed a penalty that dropped him below Syahrin in the standings.

Well, the rain stayed away as Marquez reigned over Le Mans for a second year running. His lead now sits at eight points over Dovizioso in the Championship as we move onto the latter’s home race: Mugello. It’s no win there for Marquez since 2014, can he change that in two weeks’ time?

Marc Marquez
“Of course here in Le Mans it’s always difficult with the temperature and the weather, especially today. I think this is the first time I have had a race where I had the soft tyre in the front but it was the safest option. I was focused on being consistent until I saw the gap increasing, I pushed a little bit more and into the low 32s until I saw I had two seconds. I’m happy with today’s result and it is fantastic to be able to take Honda’s 300th premier class win!"