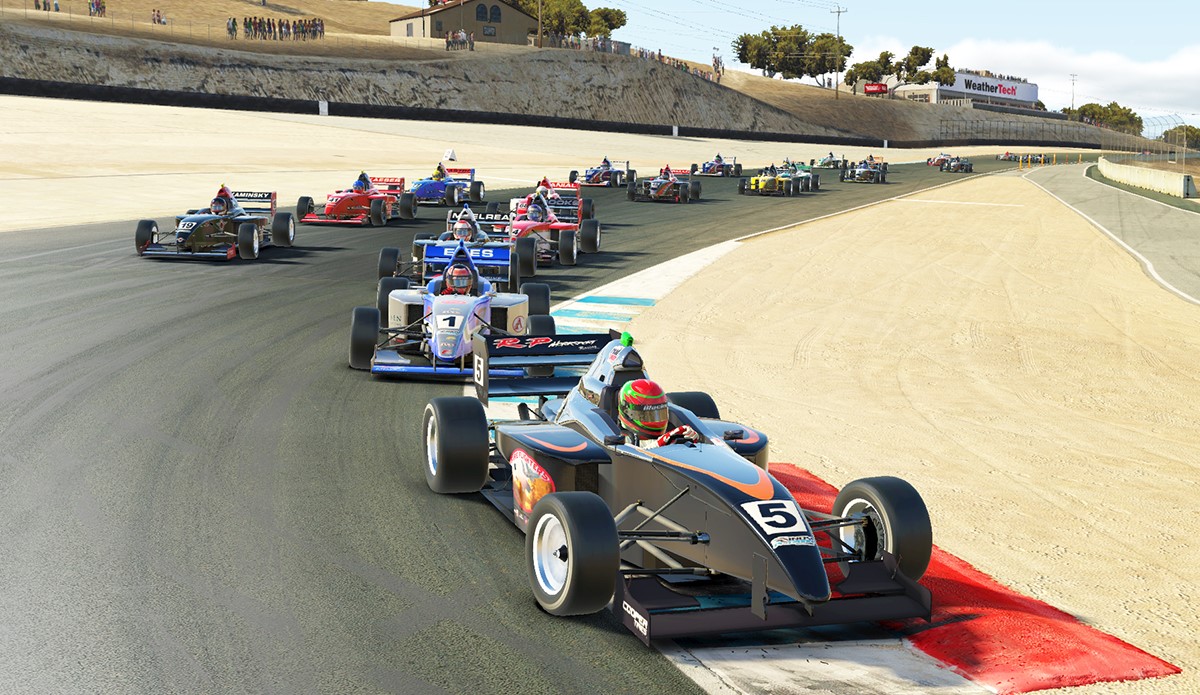 Phillippe Denes is in a virtual class of his own when it comes to the TireRack.com Road to Indy iRacing eSeries Presented by Cooper Tires. The 21-year-old from Carmel, Calif., has been struggling to obtain the funding to join defending champion team RP Motorsport USA for a full season in the Indy Pro 2000 Championship Presented by Cooper Tires once restrictions have been eased as a result of the current COVID-19 pandemic, but he displayed his credentials in sensational style during this evening’s pair of 20-minute races at his home track, WeatherTech Raceway Laguna Seca.

Denes romped away to a clear victory in the opening race, then fought his way through from 10th on the grid in Race Two, taking the lead from erstwhile points leader Braden Eves (Exclusive Autosport) on the final lap to leapfrog his way to the points lead after four of 10 races.

Eves, who last year clinched the Cooper Tires USF2000 Championship title with a brilliant performance at the Californian venue, had to be content with second place in Race Two. The result represented a good effort after an incident early in the first race led to him finishing a disappointing 13th.

The other big mover in the championship today was Pabst Racing’s Hunter McElrea. After finishing second to Eves in last year’s USF2000 title-chase, the New Zealander chased Denes gamely in Race One, then backed it up by securing fourth, right behind Kory Enders (DEForce Racing), in the nightcap.

Denes began his perfect day by taking full advantage of his local track knowledge in securing the SimMetric Driver Performance Labs Pole Award following a brief qualifying session. He translated the pole into an early lead and quickly distanced himself from his pursuers. Denes was never seriously challenged as he took the checkered flag well clear of McElrea, who qualified second and ran second for the majority of the 16-lap race despite losing out briefly to Eves at the start.

Youngster Keawn Tandon (Jay Howard Driver Development), from Calabasas, Calif., also was running with this group until an incident on the final lap dropped him to ninth behind Jacob Loomis (BNRacing), from Corinth, Texas, and DEForce Team Principal David Martinez, from Monterrey, Mexico.

Comeau drove impressively to maintain his position at the head of a snarling pack of Pro Mazda cars for the first half of the race. He was under pressure initially from Loomis and Kory Enders (DEForce Racing), from Sugar Land, Texas, although it wasn’t long before Brooks joined the lead pack, along with a fast-rising Eves, up from 13th on the grid, and Denes, who started 10th.

The battle reached a head shortly after the halfway point when Brooks challenged Comeau on the inside line at Turn Two, the Mario Andretti Hairpin, while at precisely the same time Enders made a superb move around the outside. Unfortunately, Brooks and Enders then collided at the exit of the corner. Brooks was out on the spot, while Enders managed to continue in the lead and Comeau resumed in fifth.

Enders fell victim to Eves and then Denes on successive laps, whereupon the two iRacing veterans put on a clinic as they fought for top honors over the final three laps. Eves tried his best but Denes (who had survived a quick spin while battling with Enders on the ninth lap) was up to the challenge. A classic over-under maneuver on the exit of Turn 11 gave him a run on Eves as the top two sped onto the final lap, but Denes had positioned his car perfectly to snatch the inside line – and the lead – at Turn Two. Denes duly posted the TSOLadder.com Fastest Lap on the 16th and final tour of the undulating 2.338-mile track to crown his perfect day.

Eves had to be content with second, while Enders fought off a late challenge from McElrea to seal the final podium position.

The 10-race series will continue next Wednesday with what is sure to be another action-packed pair of races at the Lucas Oil Raceway oval in Brownsburg, Ind.

Phillippe Denes (#5 Fire Fighters-RP Motorsport USA iRacing Pro Mazda): “It’s great to get a win at WeatherTech Raceway Laguna Seca. It’s my home track but I’ve never won a race here so I’m really happy to bring this one home. I felt very comfortable today. In the first race I knew I had to keep laying down the laps, get a small gap and keep pushing and it worked out.

“Some of the best races I had in karting were from the back, when I had to give it my all to get to the front. I think it’s a different mindset than when you start up front and I used that instinct to come from the back in Race Two. I saw a gap on Braden and went for it. I knew he had some front wing damage and used that to my advantage. It was a thrilling race.

“These wins are important because they can hopefully help me in the real world as well, as we’re struggling to get the budget together for a full season. I would love to be able to show what I can do with RP Motorsport in the Indy Pro 2000 series."

Braden Eves (#1 Road to Indy/Cooper Tires/MDRN Livery-Exclusive Autosport iRacing Pro Mazda): “It was a good event, especially the second race. It was unfortunate that I had the bent front wing: another car spun right in front of me and messed up the wing pretty badly, and Phil was able to catch me. The opening laps were tough with the tires not up to temperature yet. I was pushing hard to get a run on Phil and I knew if I didn’t get to the lead it would be tough to beat him, because it’s easy to defend here. But congrats to Phil and good job to everyone for putting on the race. This is a good way to stay sharp; the competition is just as stout as real life. I’m still having fun in the seventh week, though I’m really looking forward to getting back to real life racing."

Kory Enders (#7 MB Sugar Land/McLaren Houston-DEForce Racing Pro Mazda): “I don’t know how I didn’t have more damage after that race! I didn’t see Christian (Brooks), so I don’t know what happened there. I was trying my best to get the podium, to get the DEForce guys up there, so I’m really happy. My spotter, JJ (Jonatan Jorge), told me the car was fine, so that helped me keep my head together. But the car felt pretty good and I kept the off tracks to a minimum. I love this track, it’s one of my favorites, so to be able to race here – even just virtually – is great. I loved every minute of it. My nerves were 100 percent real."