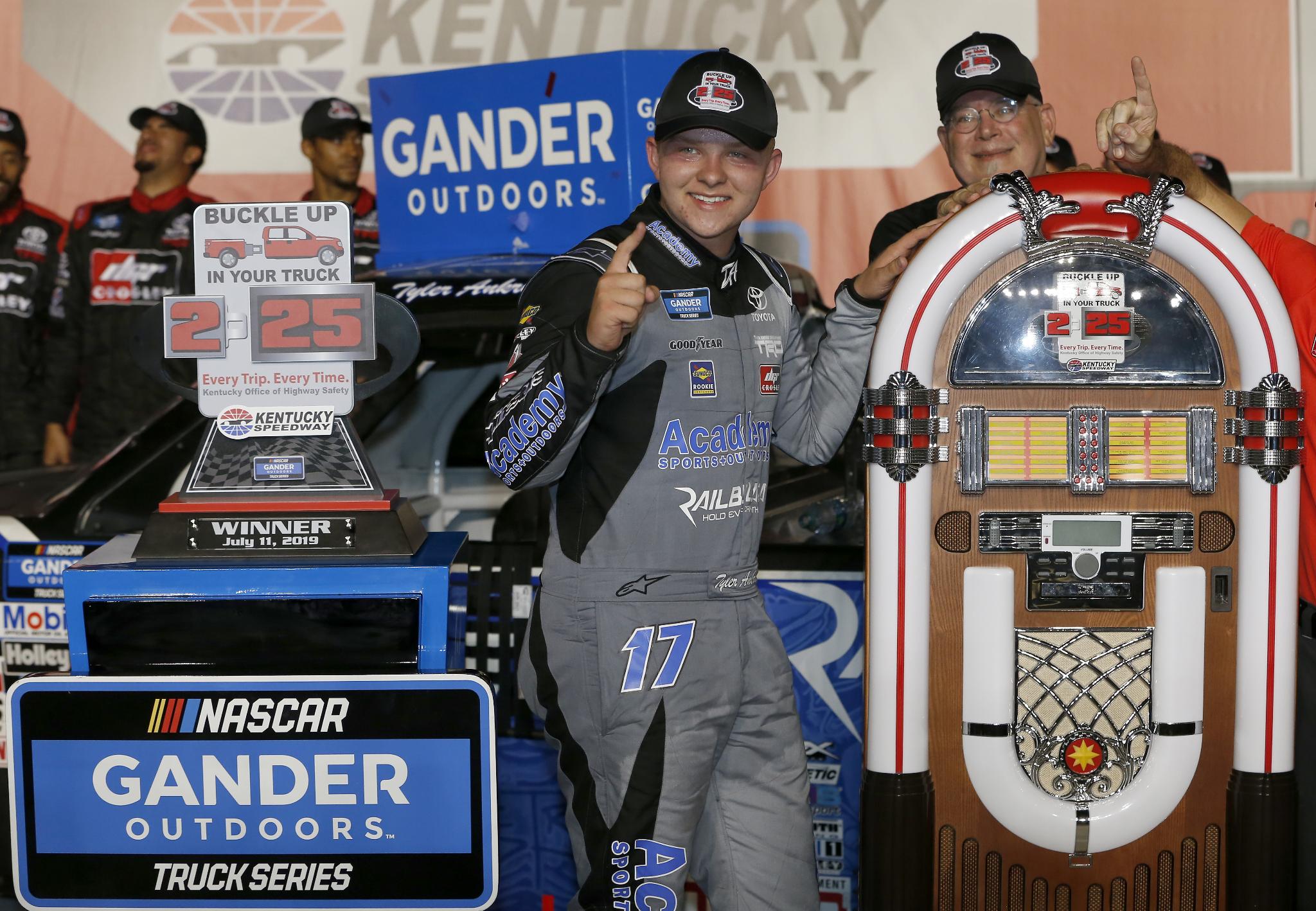 In a week that started with Justin Haley's remarkable upset win at Daytona on Sunday, 18-year-old Tyler Ankrum added another on Thursday night at Kentucky Speedway—and simultaneously threw a wrench into the NASCAR Gander Outdoors Truck Series Playoff standings.

Driving the No. 17 DGR-Crosley Toyota, Ankrum inherited the lead in the Buckle Up In Your Truck 225 at the 1.5-mile track when Brett Moffitt ran out of fuel on the next-to-last lap. Ankrum crossed the finish line 7.373 seconds ahead of runner-up Stewart Friesen, who started last in a backup truck after NASCAR confiscated his primary No. 52 Chevrolet because of an issue with the rear firewall.

"I was driving my butt off—holy cow," said Ankrum, who led a race-high 40 laps in three stints out front to earn his first victory in the series. "I think I was holding my breath for the last three laps there. Holy cow, that was awesome… I just don't know what to say. I cannot believe I just did this…

"Honestly, one of my biggest faults is I've always doubted myself, and I kind of saw all of that wash away."

Having turned 18 on Mar. 6, Ankrum has a Playoff eligibility waiver from NASCAR and grabbed a spot in the postseason on a night that proved disastrous for Playoff hopefuls Ben Rhodes, the defending race winner, and Todd Gilliland.

Rhodes hit the outside wall on Lap 127 of 150 and pitted with a flat left rear tire eight laps later. He finished 19th, nine laps down. Gilliland had engine issues and ran 17th, five laps down. He and Rhodes ended the night outside the Playoff grid, perilously close to must-win situations in the next three races.

Sheldon Creed started beside Grant Enfinger, the pole winner, and grabbed the lead going into Turn 1. From that point Stage 1 was no contest, with Creed pulling out to a lead of more than two seconds over Enfinger and more than nine seconds over third-place Ross Chastain.

Creed won the stage wire-to-wire, with Enfinger running second—the 15th consecutive stage in which the driver of the No. 98 ThorSport Ford has finished fourth or better.

That streak ended abruptly and ignominiously with five laps left in Stage 2. Enfinger was chasing leader Brandon Jones, who had driven forward from his 27th starting position after a restart on Lap 65. Enfinger steered to the inside and drove hard into Turn 3 to pull alongside Jones' Toyota.

But Enfinger didn't have enough momentum to complete the pass. His Ford slid up the track and carried Jones' Toyota into the fence, eliminating both trucks from the race.

"It's all on me," Enfinger said after exiting the infield care center. "I lost my air and wrecked it, trying to make something happen."

After the incident, Matt Crafton won the stage under caution. Where the first stage ran green from start to finish, Stage 2 was peppered with four yellows that reduced the number of contenders for the win.

Creed had pitted before the end of the second stage and didn't lead a lap thereafter. After a litany of troubles in the late going, he finished 21st in a race that saw only seven trucks on the lead lap at the end.

Harrison Burton ran third and is currently one position out of the Playoffs, ahead of Rhodes and Gilliland, respectively. Ross Chastain ran fourth, followed by Dylan Lupton, who joined DGR-Crosley teammate Ankrum in the top five.

Moffitt pitted for fuel only 10 laps after Ankrum came to pit road in the final stage, but after a one-can stop, Moffitt's crew chief, Jerry Baxter, calculated his driver was two laps short and instructed him to save. Moffitt slowed his paced but couldn't save enough.

"I was just backing it up as much as I could," Moffitt said. "We were just a lap short. It's tough. We had a good-sized lead. I've never run great here, so it was fun to get up front and dice it out, and Jerry called a great race."