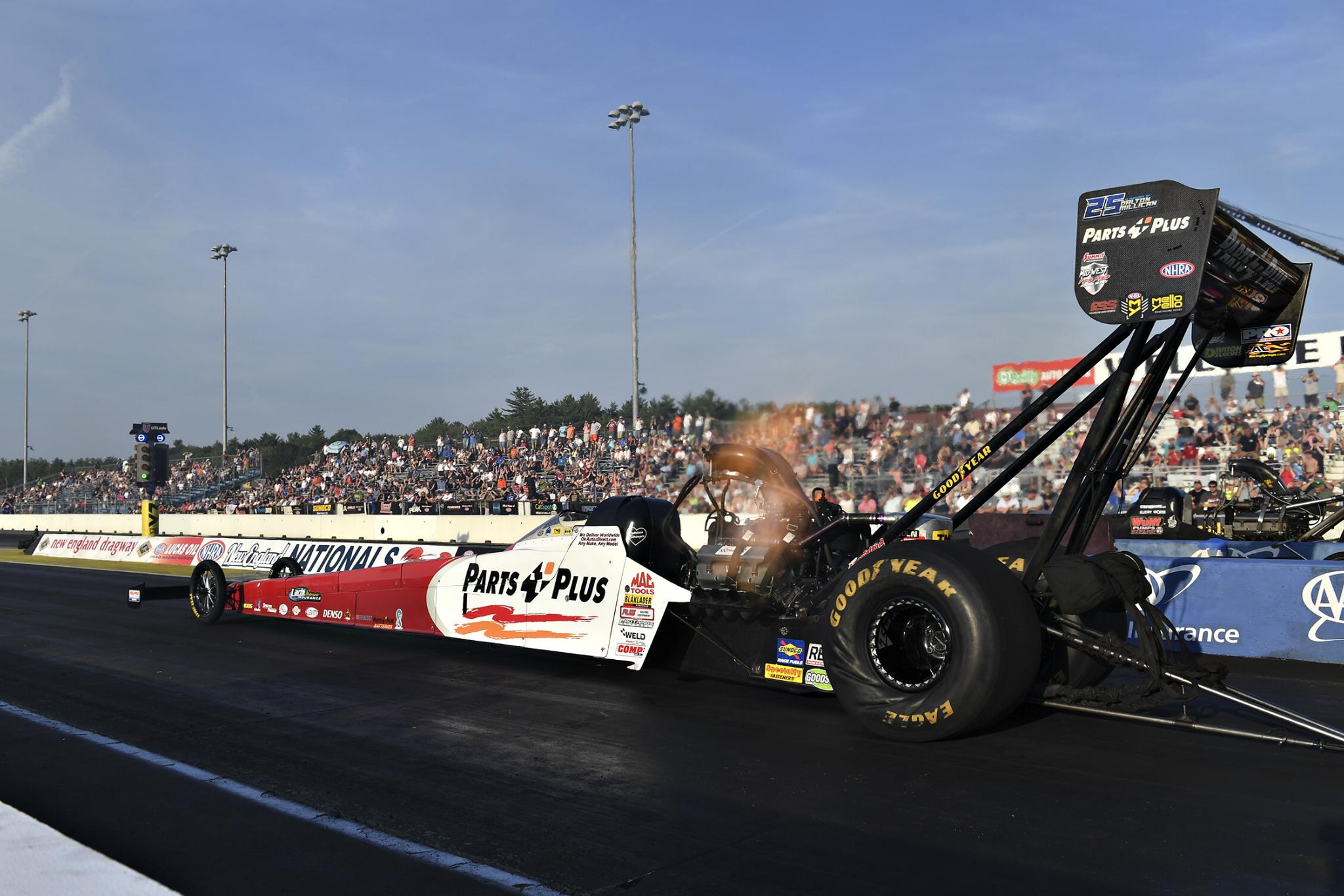 Clay Millican raced to the No. 1 qualifying position in Top Fuel on Saturday at the seventh annual NHRA New England Nationals at New England Dragway.

Defending Funny Car world champion J.R. Todd also qualified No. 1 at the 13th of 24 events during the 2019 NHRA Mello Yello Drag Racing Series season. Qualifying concluded after the third session on Saturday due to weather.
[adinserter name="GOOGLE AD"]Millican claimed his second No. 1 qualifier of the season and 22nd in his career after his pass of 3.795-seconds at 326.71 mph from Friday in his Parts Plus/Laris Motorsports Insurance dragster held up. Richie Crampton, who won earlier this year in Gainesville, finished No. 2 with a run of 3.825 at 319.07, while Kalitta Motorsports teammate Doug Kalitta was a spot behind in third after his 3.844 at 321.73.
Points leader and defending world champ Steve Torrence, who has six wins in the last seven races, will start eliminations from ninth after his 4.170 at 218.72. Millican will race for his first win of 2019 and his first NHRA Top Fuel victory with crew chief Mike Kloeber.
“Obviously we had a big change in the off-season, and Mike and I have been friends for a long time," said Millican, who is also after his first NHRA win in Epping. “Pretty much everything about what I do in the race car I learned from him. He’s taught me so much. It’s just really, really fun and it’s great working with him again. The guys working on the car have just been unbelievable. I think we’re further ahead than I thought we would be."

Todd, who picked up his third career No. 1 qualifier in Funny Car, will try to win at New England Dragway for the first time. His top run also marked the first No. 1 qualifier for Kalitta Motorsports in Funny Car at the facility.
“It just gives everybody a little pep in their step, but at the end of the day we want wins," said Todd, who has one win in 2019. “The No. 1 qualifier is good and all, but you don’t get points and trophies for that. It would be big to get a win here, and any win you can get on the tour is special. We want to start the second half of the season off on the right foot."
Eliminations at the NHRA New England Nationals begin at 11 a.m. ET on Sunday at New England Dragway, with live action starting on FS1 at 1 p.m.