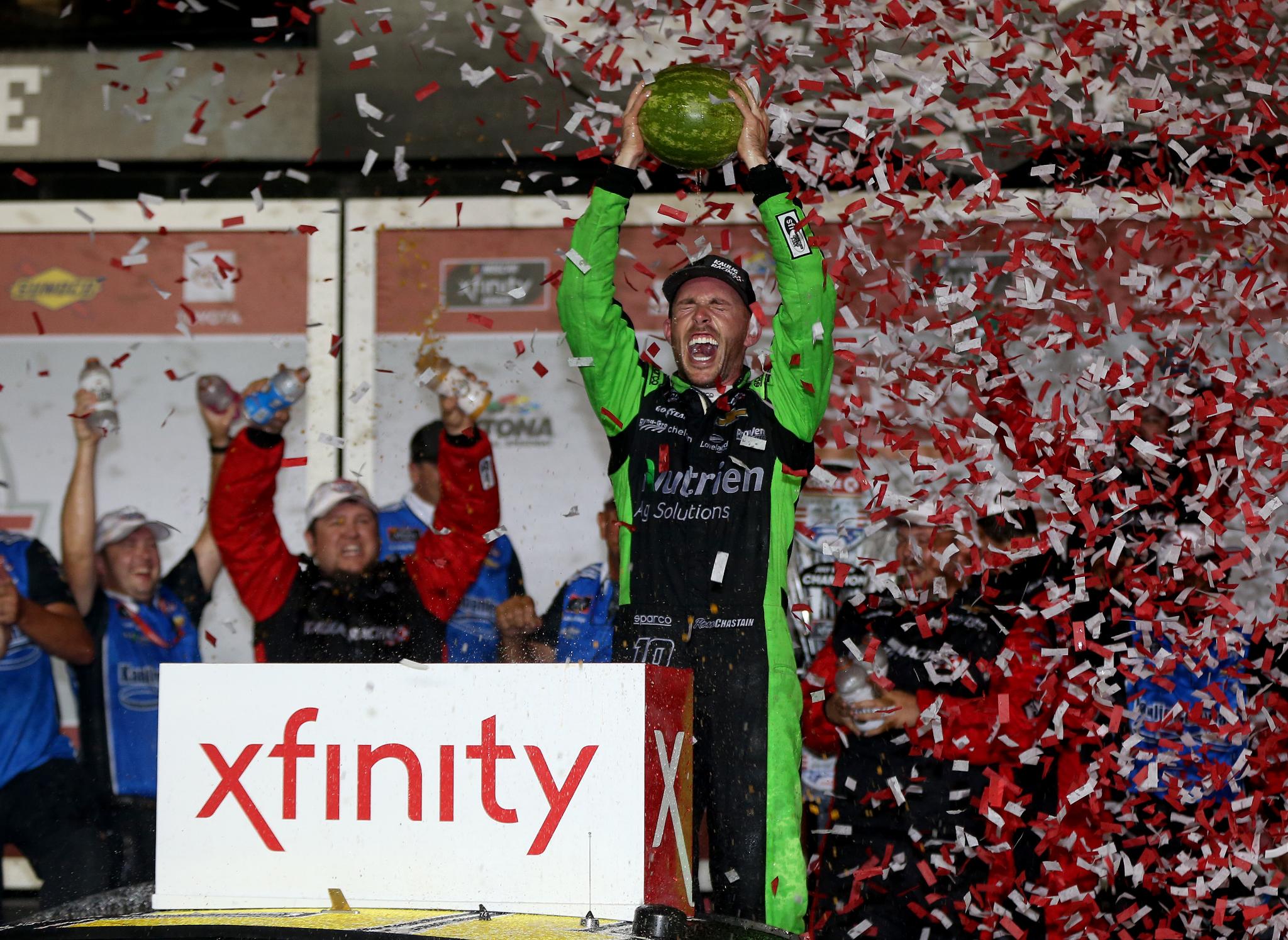 Kaulig Racing found the key to victory in Saturday night's Circle K Firecracker 250 at Daytona International Speedway, and the team did so in triplicate.

In a wild race that featured five multicar wrecks, hired gun Ross Chastain teammates Justin Haley and AJ Allmendinger across the finish line in a 1-2-3 finish for Kaulig Racing, which collected its first NASCAR victory.

Chastain finished .109 seconds ahead of Haley and .206 ahead of Allmendinger, who made his first NASCAR start since last year and his first-ever Daytona start in a NASCAR Xfinity Series car.

"Oh, my god, we did—Daytona!" exulted Chastain, a watermelon farmer from Florida who continued his roller-coaster ride in NASCAR racing with his first Xfinity victory of the season and the second of his career. "I watched these races in July as a kid, and I never could come (to the track) because we were growing watermelons.

"The guys right here (from Kaulig Racing) gave me a car that could win at Daytona!"

Chastain took the lead from series leader Tyler Reddick on Lap 93 of 100 and pulled Haley with him. Allmendinger, who steered his way adroitly through an 11-car incident on the backstretch on Lap 87, worked his way forward after a restart on Lap 91 and picked off fifth-place finisher Austin Cindric and fourth-place Christopher Bell to put an exclamation point on the first win for team owner Matt Kaulig.

Unfortunately, that exclamation point also came with an asterisk as the No. 10 Chevrolet driven by Allmendinger was disqualified after failing post-race inspection, relegating Allmendinger to a 38th-place finish.

For Haley, the race was a redemption of sorts for last year's event, when he crossed the finish line first but was demoted for passing below the double yellow line approaching the flag stand.

"After last year at Daytona, finishing second here is pretty cool," Haley said. "To have a 1-2-3 finish is absolutely incredible for us."

A race that was a pinnacle for Kaulig Racing took its toll on a number of heavyweight teams. Bell survived late contact with Michael Annett to run fourth and trails Reddick by 77 points. Reddick had to pit with a flat tire after losing the lead to Chastain on Lap 93.

But four-time winner Cole Custer caught pieces of three different wrecks, the last of which (on Lap 87) totaled his No. 00 Ford and relegated him to 27th place.

"That was terrible," Custer said. "It's just speedway racing. I just have never been good at it, I guess. I always get caught up in the wrecks, so I don't know."

In a race that started two hours late because of rain and was red-flagged for 17 minutes 45 seconds after the Lap 87 pileup, Justin Allgaier also had an evening full of contact. His last incident came on Lap 92, when he spun after contact from Allmendinger's No. 10 Chevrolet. Allgaier finished 18th, a lap down.

But the big winner was Chastain, who lost his Xfinity ride with Chip Ganassi Racing when his sponsored folded in the offseason. Opting in midseason to run for the NASCAR Gander Outdoors Truck Series championship, Chastain lost a victory on a disqualification at Iowa, only to win at World Wide Technology Raceway in Madison, Illinois in the next event.