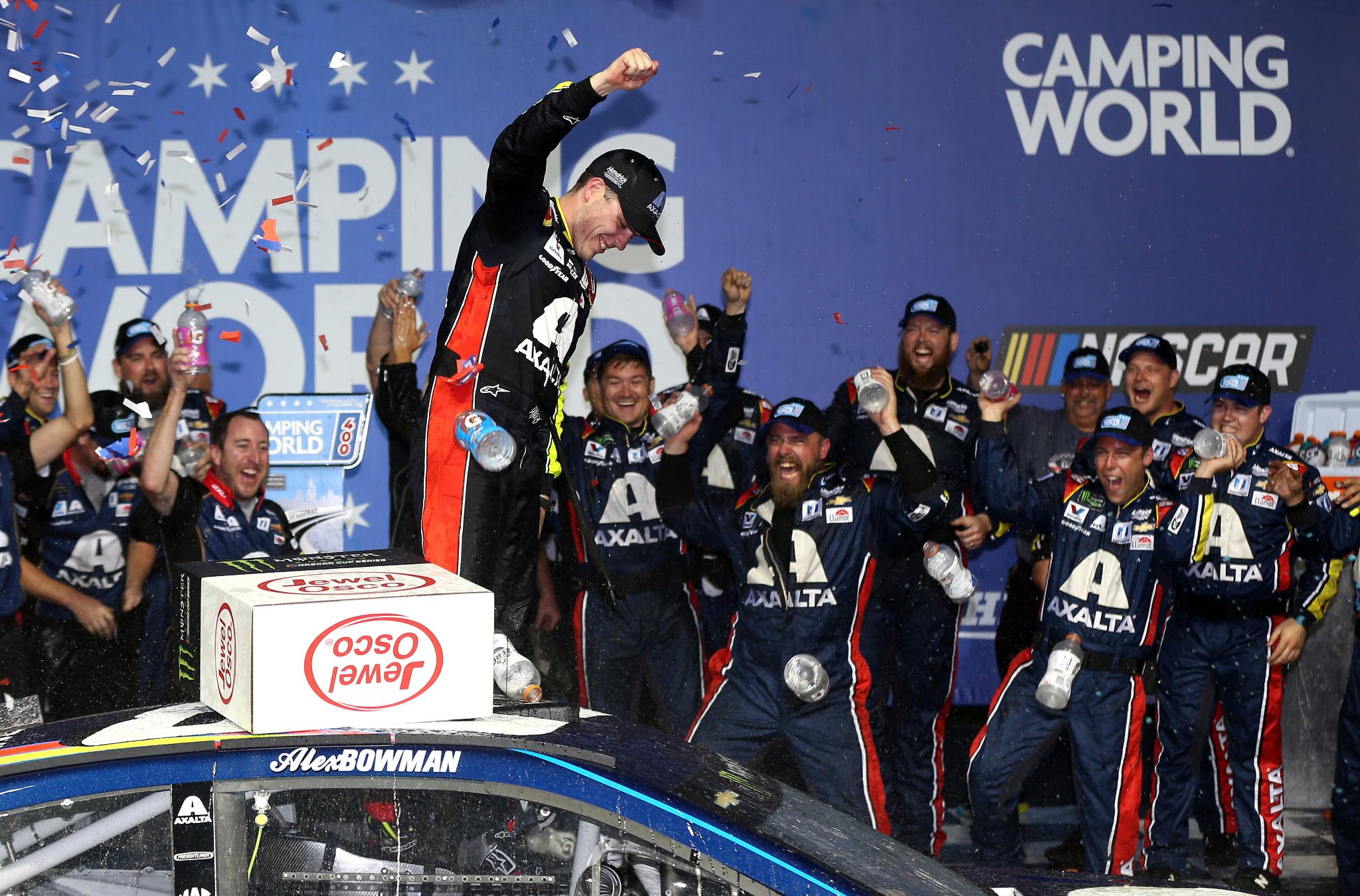 Alex Bowman's first career Monster Energy NASCAR Cup victory at Chicagoland Speedway was as much a lesson in perseverance, determination and guts as it was a show of his raw talent. It took it all those qualities for the 26-year-old to reach Victory Lane for the first time in Sunday's Camping World 400.

Bowman's No.88 Hendrick Motorsports Chevrolet held off a hard-charging Kyle Larson for the win by .546-seconds – the two young drivers door-to-door in the closing laps, exchanging the lead twice in the final eight laps of the race.

During his inaugural victory lap celebration, the Tucson, Arizona, native Bowman drove into the track's infield still soggy from rain showers that delayed the race finish by nearly three hours. Despite the good celebratory intentions, Bowman's Chevrolet stuck there, but the good vibes of the night resumed when he climbed out and climbed onto the car's roof, waving to the cheering crowd and taking in the moment as a first-time race winner.

"It's all I've wanted my whole life," Bowman said after climbing down off his car's roof.

"I'm just tired of running second, didn't want to do that anymore," he said smiling in reference to his three runner-up finishes in the first 16 races of this season.

And he had a good laugh about his stuck-in-the-mud car as he navigated the mucky infield to walk across the track and take the checkered flag he earned.

"I'm the dumb guy that won the race but got the car stuck in the mud."

[adinserter name="GOOGLE AD"]Actually Bowman's win was an impressive display of drive – both figuratively and literally. His NASCAR career essentially got a "second chance" at glory, when he was hired by the championship Hendrick team to replace the retired Dale Earnhardt Jr. in the famed No. 88 last year. He had competed fulltime at the Cup level in 2014-15 in a car that was not considered competitive, hoping to gain experience.

He was hired by Hendrick in 2016 to drive Earnhardt's No. 88 while the sport's star rehabbed from injury. Bowman then sat out a year of full-time Cup competition in 2017 as Earnhardt finished out his own decorated career. The car was all Bowman's as of last year.

Earnhardt, who was part of the NBCSN broadcast team that officially took over the NASCAR Cup Series race broadcasts from partner FOX just his week, was understandably proud in the broadcast booth.

"I'm just so happy for Alex," Earnhardt said. "I've seen a majority of his career up close and I'm so happy to see him achieve his dream."

Certainly Bowman's victory Sunday night was not only a shot of emotional adrenalin for himself, but for the whole Hendrick Motorsports team. In addition to Johnson, second-year driver William Byron finished eighth and Chase Elliott finished 11th – the first time this season all four drivers have finished among the top 11. Bowman (88), Johnson (10) and Byron (nine) all led laps.

The big lap leader on the day was Stewart-Haas Racing driver Kevin Harvick, who led a race-best 132 circuits and won Stage 2, but finished 14th after hitting the outside wall late in the race.

For runner-up Larson, the outcome was obviously disappointing since he finished second last year after a tough last-laps battle with Kyle Busch. But the popular Californian seemed genuinely happy for his friend Bowman as well.

"I was actually surprised I even got to him," said Larson, who took the lead from Bowman for two laps on lap 260.

"I thought when he came out about the same distance off pit road in front me, I thought he was just going to check out. But like I said, he was struggling and we were able to get to him and get by him, but did a good job. He did a good job regrouping and figuring out how to make his car driver better and got the win.

"Cool to see him get the win there. Would have liked for him to have to wait another week or so, but happy for him," Larson added with a grin.

WHAT AN INCREDIBLE DAY. YOU ARE STANDING HERE IN FRONT OF THESE FANS AS AS CUP SERIES WINNER. DID YOU DREAM THIS MOMENT WOULD EVER HAPPEN?

"It's all I've wanted my whole life. I feel like this is a lot of validation for a lot of people that said we couldn't do this. I'm so proud of everybody at Hendrick Motorsports and Axalta and the Hendrick Engine Shop. My guys have worked so hard and we struggled so bad last year and the beginning of this year. I had questions if Mr. Hendrick was going to let me keep doing this. All the rumor mills. But, to be here winning a race in the Cup Series means so much. I just couldn't do it without these guys. My pit crew is the best pit crew on pit road. And, this is all I ever wanted."

KYLE LARSON GOT BY YOU. HOW DID YOU RE-GROUP AND PASS HIM FOR THE WIN?

"I'm just tired of running second. I don't want to do that anymore. So, I feel like this is the last box, aside from chasing the championship, I needed it personally for myself, to validate my career. I feel like obviously there's a lot more left to accomplish but this is always what I hear is ‘you haven't won a race'. So, I think even Chad (Knaus) said something about me not winning a race. So, Chad Knaus, there we went and did it. Everybody can stop giving me crap. We finally did it!"

"I'm stuck. I made a really bad choice and came down here in the dirt and forgot about the rain today. So, yeah, they're going to have to tow me out. I'm not going anywhere. So, I'm the dumb guy that won the race and got the car stuck in the mud."