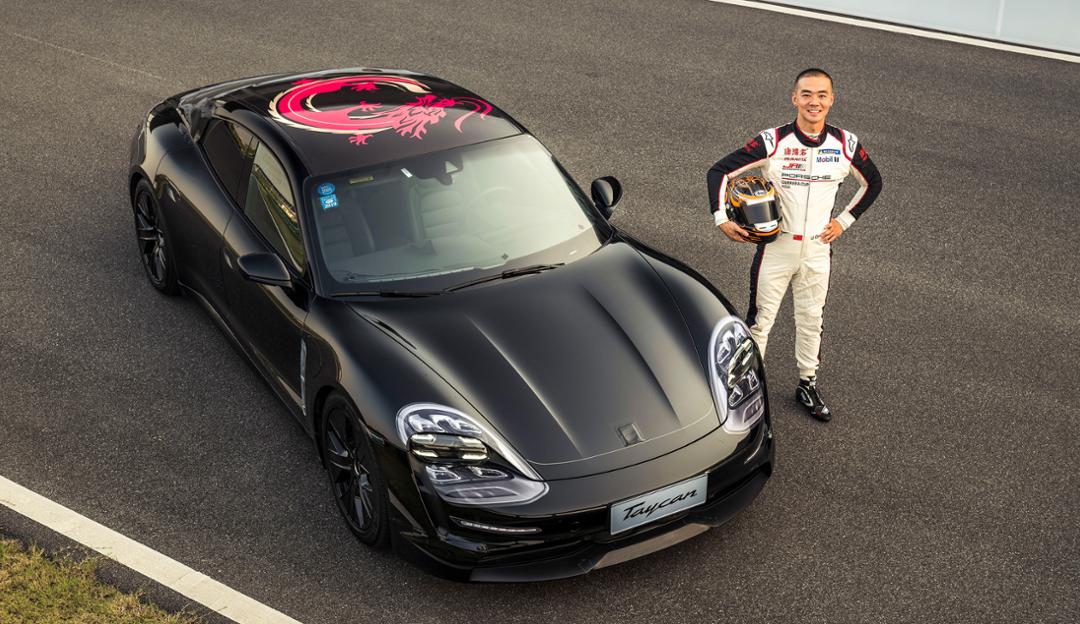 Public premiere for Porsche Taycan prototype: the Porsche Triple Demo Run kicks off with the first official demo laps on the handling track at the Porsche Experience Centre (PEC) in Shanghai.

A still camouflaged Taycan prototype is making three appearances on three continents in the period of three weeks, visiting China, the UK and the US – each important sales markets for the first all-electric sports car from Porsche. The livery on the roof is a tribute to each of the guest countries: in Shanghai the prototype featured a dragon graphic. Behind the wheel: Li Chao, a driver from the Porsche Carrera Cup Asia.

[adinserter name="GOOGLE AD"]“The exceptional performance typical for Porsche was a clear development objective for the Taycan. You can sense that right from the start," says Li Chao.

He is particularly impressed with the handling: “From uncompromisingly sporty to surprisingly comfortable, the chassis of the new Taycan covers a wide range and successfully combines the precise handling of a sports car and the long-distance comfort of a saloon. In addition to its low center of gravity, the rear-axle steering also plays a crucial role," explains Li Chao.

“The Taycan steers into corners very directly and has plenty of grip."

The Taycan will also demonstrate its potential at the other stops on the Porsche Triple Demo Run: in the Hill Run as part of the Festival of Speed at Goodwood (4 to 7 July 2019) and at the season finale of the ABB FIA Formula E Championship in New York from 13 to 14 July 2019.

Again, there will be famous drivers behind the wheel – this time Mark Webber and Neel Jani.

Before the Taycan celebrates its world premiere in September, it will have covered around six million test kilometers. At Porsche, electric cars have to undergo the same rigorous testing program as combustion-engined sports cars. In addition to displaying superior performance, this always includes proving unrestricted everyday usability in all climatic conditions. Particularly demanding tasks such as charging the battery, or controlling the temperatures for the drivetrain and interior under extreme conditions, are additional aspects that are tested for the battery electric models.

Li Chao (38) is a Chinese businessman and racing driver. Since 2012 he has been racing in the Porsche Carrera Cup Asia. In 2018, he finished third in the Pro-Am standings and was ranked 12thoverall. In the same year, he finished fifth in the FIA GT Nations Cup alongside Ye Hongli. In March 2019, Chao was second along with Chris van der Drift in a Porsche 911 GT3 R at its China GT debut in Sepang.

Opened on 26 April 2018, this PEC is the first in Asia and the sixth Porsche Experience Centre globally. The Experience Centre also has direct access to the 5.5-kilometre Shanghai International Circuit. A 1.4-kilometre handling track with skid pan, hydraulic kick plate and dynamic area gives drivers the chance to get to grips with vehicle dynamics. There is also an off-road track. The convenient location of the PEC Shanghai is another bonus as approximately 300 million people live within a three-hour drive.

The Porsche Triple Demo Run kicks off with the first official demo laps on the handling track at the Porsche Experience Centre in Shanghai.