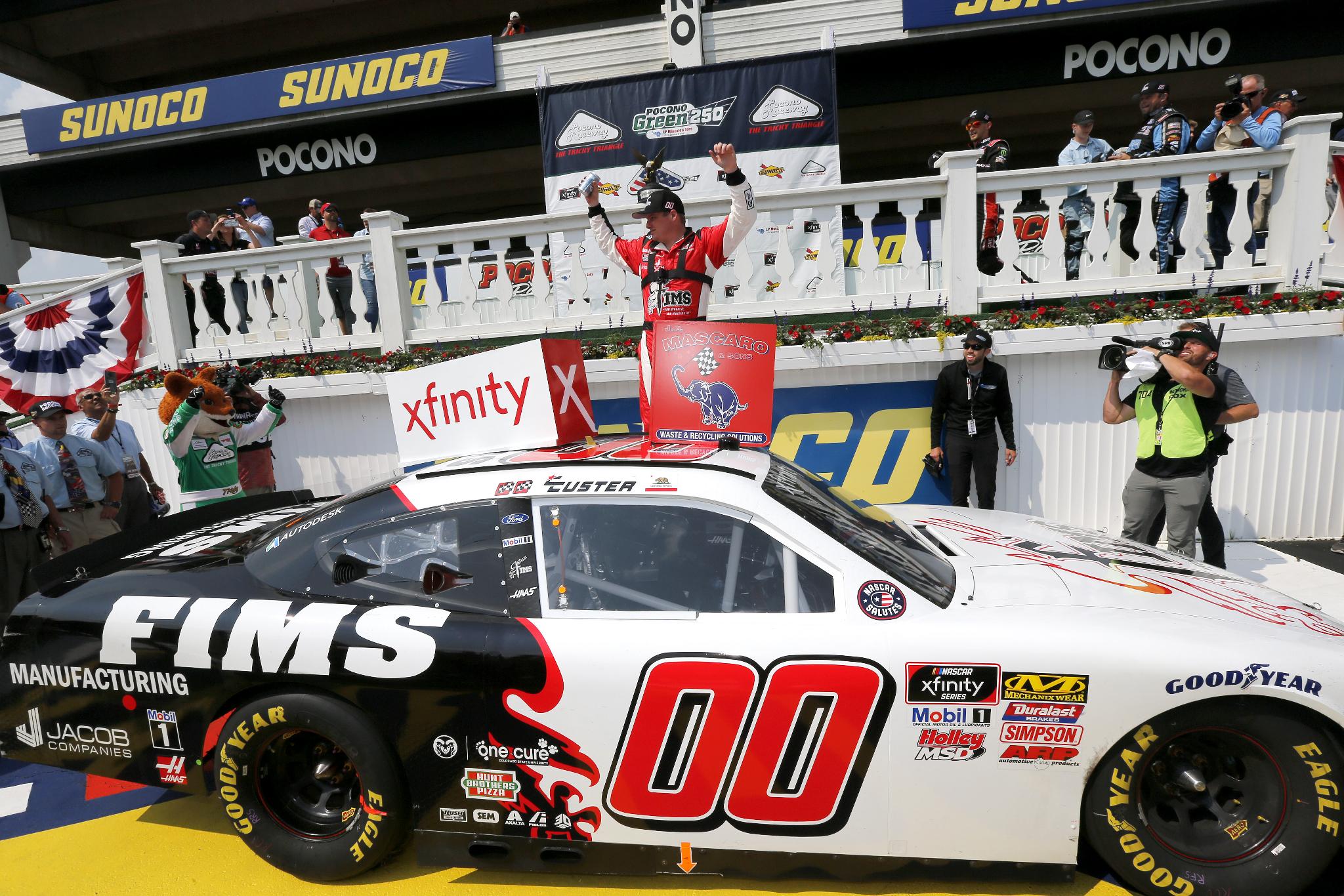 Cole Custer led 59 laps from the pole and, at one point in Saturday's Pocono Green 250, held a lead of more than 13 seconds, but it took a pass through the final corner in overtime for the driver of the No. 00 Stewart-Haas Racing Ford to win his third NASCAR Xfinity Series race of the season.

Series leader Tyler Reddick had grabbed the lead from Custer moments after the overtime restart on Lap 102. Custer gave chase and, one lap later, took full advantage in Turn 3 at Pocono Raceway when Reddick failed to hold the bottom of the track entering the corner.

Winning for the first time at the 2.5-mile triangular track and for the fifth time in his career, Custer crossed the finish line .226 seconds ahead of Reddick's No. 2 Richard Childress Racing Chevrolet.

Reddick had started the race from the rear of the field because of a transmission change and later rallied from a pass-through penalty for an outside tire violation on his next-to-last pit stop to claim the runner-up spot and extend his series lead to 76 points over fifth-place finisher Christopher Bell.

On the final restart lap, Reddick pushed Custer clear of third-place finisher Chase Briscoe in the top lane, then shot to the bottom of the track and cleared Custer's Mustang through Turn 1. The move took Custer by surprise.

"Tyler gave me a real run for my money there," Custer said. "I have no idea how he made it stick on that restart on the bottom, passing me. But he did. He was unbelievable on the brakes at the end."

[adinserter name="GOOGLE AD"]But Custer, who hadn't won from the pole in eight previous tries, had the winning gambit planned as the cars approached Turn 3 for the final time.

"I was just able to kind of force a mistake a little bit trying to pack air on him," Custer said. "It was a fun end of the race. I had my downshift planned right there. I wish I didn't have to do it like that, but it probably made it exciting."

Ultimately, a tight handling condition contributed to Reddick's undoing and prevented him from holding the inside line in the final corner.

"I tried to really get it stopped and make sure I covered the bottom," Reddick said. "We just fought tight over the last half of the race. Thought we had a really good restart, got by Cole, but I was too tight out front in clean air. I just got loose in Turn 3 and gave it back."

Custer won Stage 1 wire-to-wire but lost track position in Stage 2, thanks to a variance in strategic calls by other teams. Justin Allgaier took the Stage 2 victory, but his race fell apart when he spun in Turn 1 seconds after a Lap 98 restart to force the overtime.

By then, Custer had reclaimed the lead on Lap 85 during an exchange of green-flag pit stops and had pulled away to a lead of 13.620 seconds before Austin Cindric's Ford slipped in the Tunnel Turn and sent Jeffrey Earnhardt's Toyota spinning.

That caution bunched the field and gave Reddick, Briscoe, Bell and fourth-place finisher Ryan Preece a chance to fight for the win.

In the end, however, it was Custer who prevailed in the fastest car—despite Reddick's gutsy ploy in Turn 1.