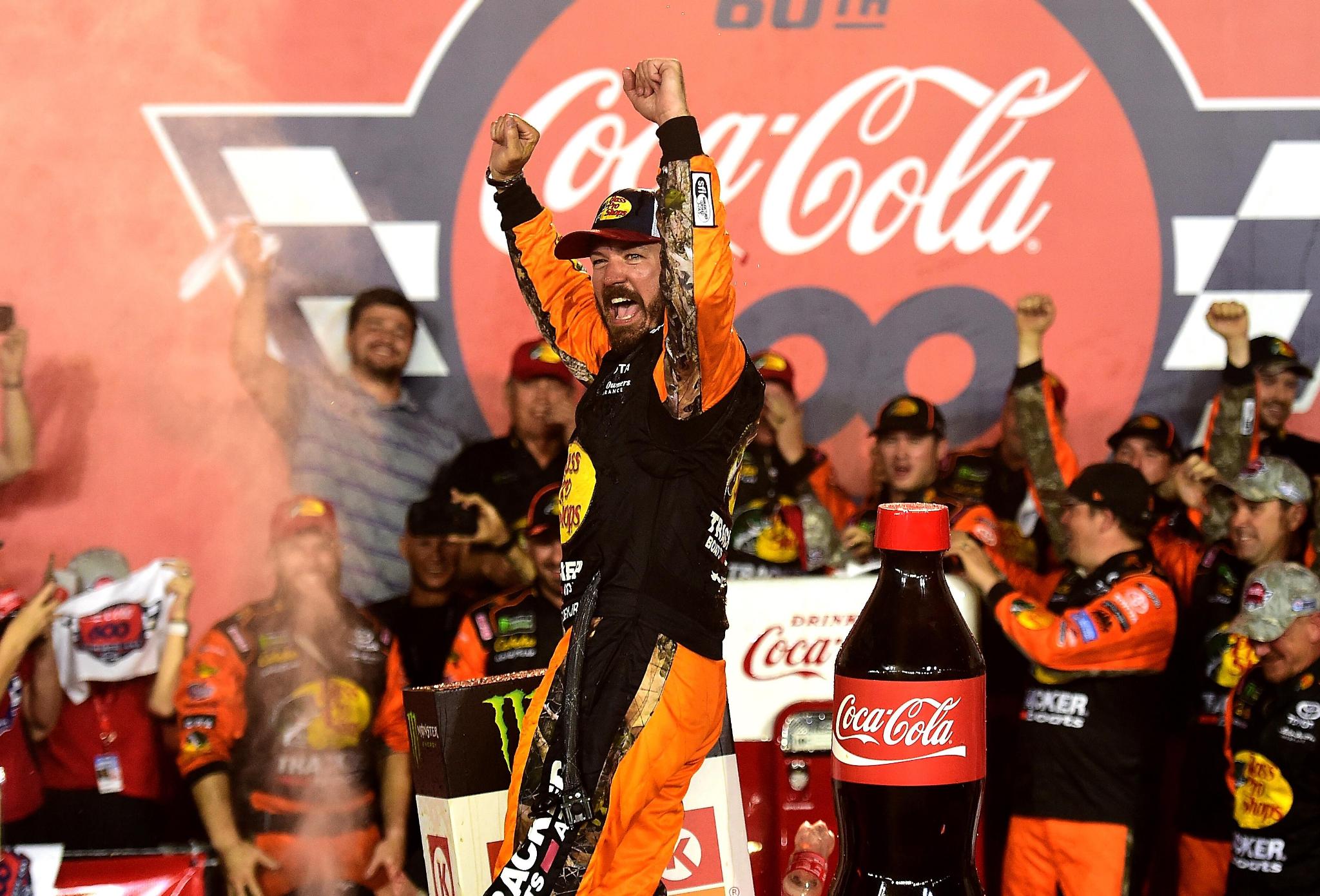 Martin Truex, Jr. rallied back after hitting the wall and took his beat up and broken Toyota Camry to Victory Lane in a wild night of racing in Sunday's 60th-running of the Coca Cola 600 Monster Energy NASCAR Cup Series event at Charlotte Motor Speedway.

Truex, Jr. powered to the lead with a thrilling four-wide pass following a restart with five laps to go to beat out Joey Logano and Kyle Busch to score his second Coca Cola 600 victory and the 22nd win of his career.

Truex's win gave his newly-inducted Hall of Fame car owner Joe Gibbs his fourth Coca Cola 600 victory and spoiled the party for rival team owner Roger Penske – who was hoping to see Logano in Victory Lane and pull off the rare Memorial Day sweep following Simon Pagenaud's win in the Indianapolis 500 earlier in the day.

Truex's race nearly ended as soon as it started after he cut a right front tire and smacked the wall while leading the race on lap 75, but his team rallied back, fixed up the car, and put him back in contention to win.

"I don't know how we did it honestly," said Truex. "I blew that right-front tire earlier and hit the fence off (Turn) 4. I thought man, that's not good. I know this car is pretty banged up. We just fought back from it.

"What a race. Up and down – you never know what can happen in these things. We were so good early on, blew that tire, hit the fence and I'm like ‘we're done. How are we going to fix this thing?', but the guys worked hard, fixed it up."

Tire problems plagued nearly all of the Joe Gibbs Racings cars in the first half of the race, with Erik Jones brining out the first caution after blowing a tire on lap 24, while the Gibbs-affiliated car of Matt DiBenedetto suffered a tire failure on lap 49 and Truex's teammate Denny Hamlin bounced off the wall on lap 162.

After hitting the wall, Truex's team managed to hammer out the fenders on his car and put him back on the track on the lead lap – enough to salvage a ninth-place finish in the opening 100-lap stage.

The crew continued working on the car through the second stage and by midway through the third stage, Truex had fought his way up to the second spot and took the lead away following a round of pit stops on lap 253. Following a back-and-forth battle with teammate Kyle Busch, Truex wrestled the lead away for good with 41 laps to go in the stage and held on to take the green-checkered flag.

The fourth and final stage found Truex and Elliott trading the lead for 89 laps before Brad Keselowski spun to bring out the 16th and final caution flag.

The ensuing caution brought the field to pit round while David Ragan opted to stay out and inherited the lead, with Newman, Truex, Kyle Busch, Elliott, and Logano lined up behind him.

On the restart, Kyle Busch and Newman dived to the inside and took Ragan three wide on the backstretch, but lost too much momentum fighting each other, allowing Truex to dive to the inside from fourth place and pull even as they came into turns three and four. By the time they came to the front stretch, Truex had slid up in front of Logano and into the lead.

Once back out in front, Truex was untouchable – beating Logano to the finish by four car-lengths.

The four-wide pass was the only avenue Truex could take to get back to the front, and he went for it.

"I was thinking I was going wherever there was a hole because I wasn't lifting," said Truex. "That's kind of the way it works there. It seemed like the second half of the race for sure the bottom was really where you wanted to be. I had a hole in the bottom to get into (Turn) 3 and I knew that was my only shot. Just barely cleared the 22 (Joey Logano) off (Turn) 4 sideways. He was on my bumper and had me sideways and I hung onto it and luckily finished it from there."

Logano had rallied from his own misfortunes just to finish in the runner-up spot – at one point having dropped all the way out of the top ten. Logano's team wrenched on the car all night and got him back into contention for the final stage.

"I needed (Truex) to go slower, but that's not his job," said Logano. "We had a rough start to this thing. The guys did a good job fixing it up to where we were competitive at the end and had a shot to win, so that's all you can ask for. I don't know how we got from where we thought we were gonna be good in practice and then started the race really bad. I'm glad we made some good adjustments to get somewhat close.

"If you told me we were gonna finish second early in the race, I would have taken it, but when you actually finish second and you see the lead that close you don't want to take it."

You're a two-time winner of the longest race of the year. You really earned this one today, didn't you?

"I don't know how we did it honestly. I blew that right-front tire earlier and hit the fence off (Turn) 4. I thought man, that's not good. I know this car is pretty banged up. We just fought back from it. We kept working on the car and kept adjusting on the car. What a rocket ship this Bass Pro Toyota was this weekend. I felt good about it in practice, but you just don't know and these mile-and-a-halfs have been tough on us this year – kind of scratching and clawing trying to find something. Kansas a few weeks ago was really a reality check for us. It's one of our best tracks and we really struggled there and knew we had to get to work. Just hats off to the guys for listening to my input and what I had to say. We had a pretty good car at the All-Star race last weekend, but we knew it wasn't good enough. They went to work this week and made it better. I'm just really proud, really happy for everybody at JGR (Joe Gibbs Racing) back in the shop, Toyota, Bass Pro Shops, Auto Owners, everybody that helps us here. The TRD (Toyota Racing Development, U.S.A.) engine was unbelievable tonight. We overheated early when we had that damage and it held together. I don't know what else to say. Just an awesome team. I'm blessed to drive for JGR. Thanks to Coach (Gibbs) and everybody. It's been awesome."

What were you thinking on that restart with five laps to go?

"I was thinking I was going wherever there was a hole because I wasn't lifting. That's kind of the way it works there. It seemed like the second half of the race for sure the bottom was really where you wanted to be. I had a hole in the bottom to get into (Turn) 3 and I knew that was my only shot. Just barely cleared the 22 (Joey Logano) off (Turn) 4 sideways. He was on my bumper and had me sideways and I hung onto it and luckily finished it from there."

Is there a more special weekend to win?

"I don't know. This is just a special race. The longest race of the year. So much history. What this weekend means for all the soldiers and all those that have given the ultimate sacrifice so we can even be here. The Null Family that's on my car – Chief Petty Officer (Nicholas) Null. I met his family this weekend and they were so appreciative of NASCAR and teams and everybody for doing this. I can't wait to see them here. They said we were going to win and now we get to have a cold beer and celebrate. Just appreciate everybody on this weekend. It's definitely a special one. Kudos to NASCAR and all the teams for putting it all together."