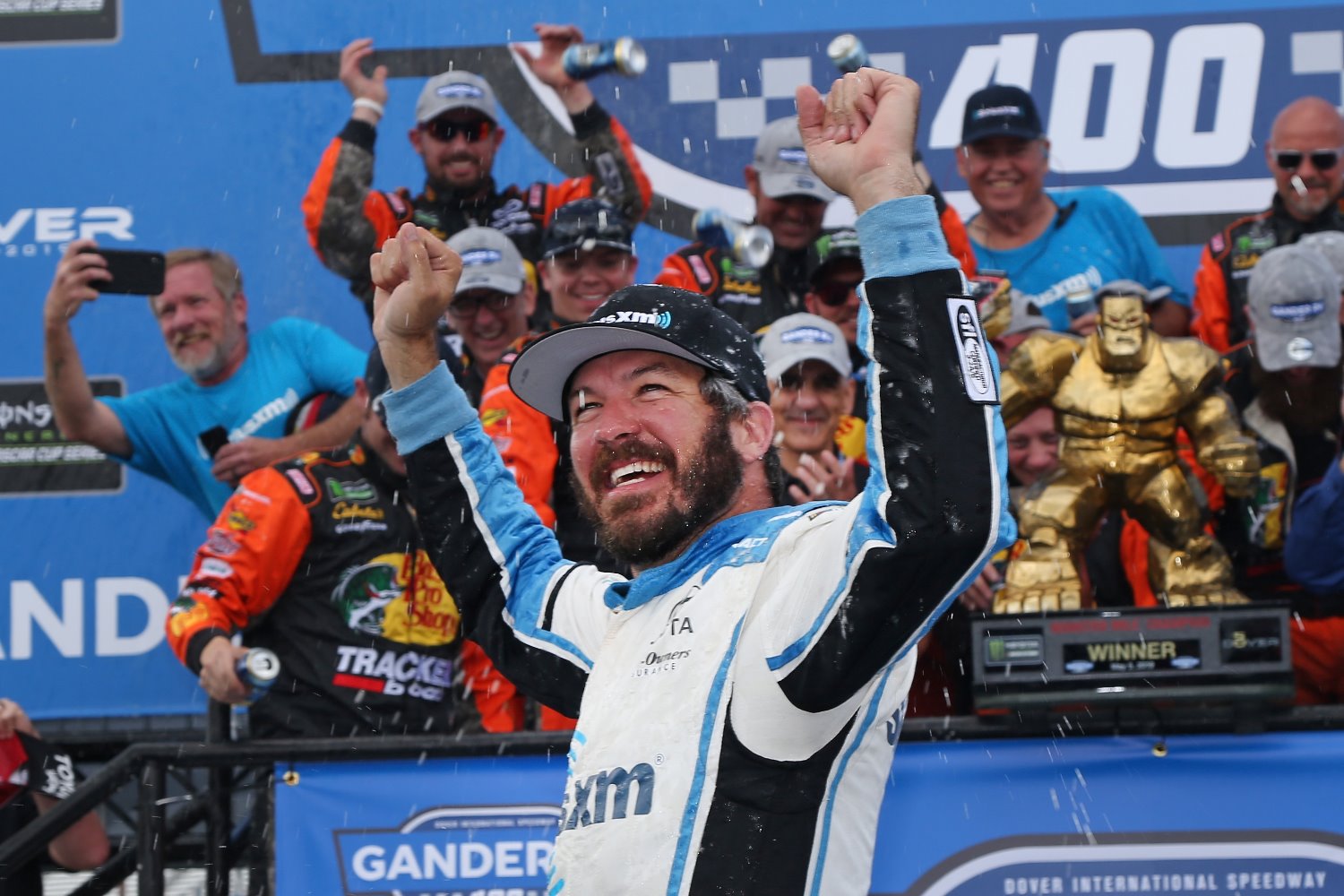 Martin Truex Jr. came all the way from the back to win the Gander RV 400 on Monday at Dover International Speedway, beating Alex Bowman to the finish line by 9.501 seconds. Truex earned his second victory in the Monster Energy NASCAR Cup Series this season despite starting from the rear after multiple pre-race inspection failures.

It was the Mayetta, New Jersey native’s third win at his home track and his first at the “Monster Mile" since the fall of 2016. Truex passed Bowman on the final lap for the win in Stage 2 and built on that lead throughout much of the final stage. It was Truex’s 21st career win in NASCAR’s top series, and it came on a Monday after Sunday’s race was postponed because of rain. The win also came on Dover’s 50th-anniversary celebration.

For Bowman, the second-place finish tied a career best that he set just last week at Talladega. Kyle Larson finished third in the No. 42 Chip Ganassi Racing Chevrolet, and Kevin Harvick and Chase Elliott rounded out the top five. Elliott led the most laps in the race at 146 with Truex second with 132 laps led.

How good does it feel to be back in Victory Lane at this place?

“It feels incredible. So thankful for this team. What a race car we had today. This SiriusXM Camry was just incredible. Thank you to everyone back at the shop at JGR (Joe Gibbs Racing), Bass Pro, Auto Owners, everybody who supports us and makes this happen. We have one hell of a team and we came here with a new setup this time. We had an older setup that won in 2016 and had been good but not good enough. Hats off to Cole (Pearn, crew chief), James (Small, engineer) and everyone with TRD (Toyota Racing Development, U.S.A.) back in California, Costa Mesa for awesome engines and horsepower. Thanks to all these fans that have come out today on Monday."

They say this is a tough place to pass. How did you do it?

“I promise it wasn’t easy. It was a lot of work. It was tough. But this race car was just incredible. Just thanks to everyone who makes this possible. I can’t believe it. Without Talladega, we would have had two in a row. It is special. New guys this year. Coach (Joe Gibbs, team owner) has put together a good bunch and Cole (Pearn, crew chief) and everybody. I am really, really proud to drive these Toyotas. They are awesome and I am a lucky guy."

“I think just putting all the details together. We've had speed all year. Finished second at Atlanta. Felt like we had the best car. Had some issues on pit road. Phoenix we ran second again. Seems like we were having little hiccups here and there. Now we're starting to not only make our cars a little bit faster, show up better on Fridays, we're a step ahead on the weekend. The pit crew is really doing a great job. That's been the difference. We had a lot of trouble in the pits earlier in the year, didn't get to show our speed. The guys are coming together, gelling, doing a fine job. We were able to take advantage of fast race cars today."

How much did the track change? Did you guys adapt or did it come to you?

“It definitely changed a lot. We were really fast the first run of the race and I think from there we just had to keep up with the race track. It was definitely changing, and there were a few runs in there where we got pretty tight and we had to continue to free the car up. It was right at the end when we needed it to be and luckily no cautions at the end there, so we could just ride around and put it in the bag."

What about Monday at the Monster Mile works well for you?

“I don’t know, but if we have to race here again on a Monday, I will be pretty excited about it."

Talk about your top-10 finish today at the Monster Mile.

“We had really good speed in the Sport Clips Camry. We kind of rode around there all day in the top 10. We just couldn’t get the track position we needed to go and run up front. We felt like we were better than a couple in front of us. Just couldn’t quite get there. Just a long day. It was tough to pass and you really had to rely on track position and getting good restarts and getting good pit stops. A solid day for us. We have had some rough weeks, so to get back on track and run where we know we are fully capable of – good momentum and we are going to Kansas next week which has been a good place for us the past few times."

“It seemed like the bottom groove was preferred by a lot and it was tough to get up and make a move in the middle. It was hard to get some speed rolling there, especially if you had someone behind you. It felt like they would kind of snooker you and put you back another spot. It was just tough to make moves and it was tough to be aggressive and find a way to pass. Just tough all day."