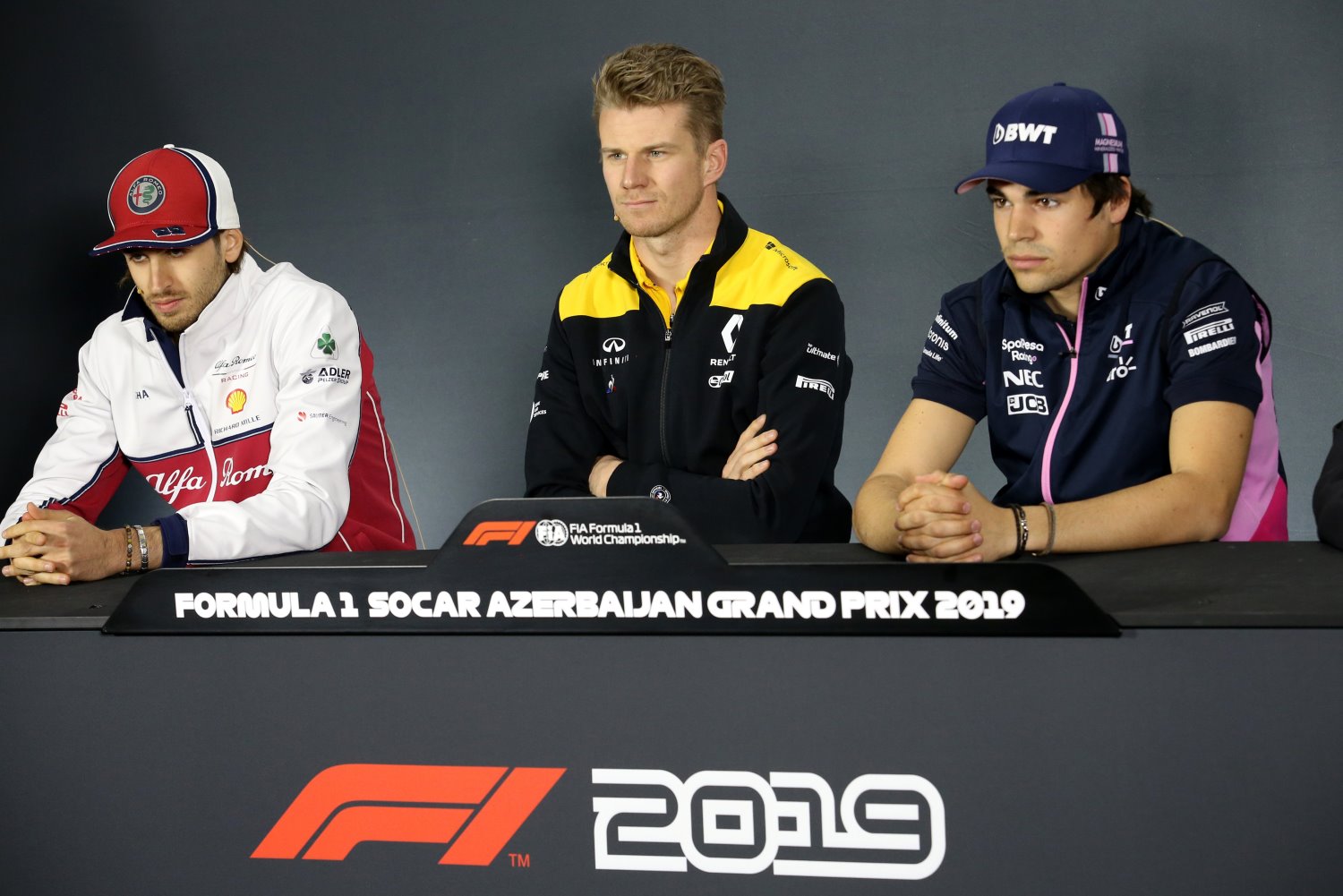 Q: Kevin, we're going to start with you. We've seen dramatic races in each of the last two years here in Baku. How much do you as a driver enjoy the challenge of racing here?

Kevin MAGNUSSEN: I think it's an exciting race. As you said, lots of action, lots of safety cars, and stuff like that in previous years. We'll see — this year everyone is trying to go conservative, and maybe we'll have a boring race. I don't know. It's a cool track, it's fun to drive, and lots of good opportunity to overtake and race people, so yeah. A good place to go racing.

Q: We're going to get all of your thoughts on this place. Lance, you've obviously had a podium here in the past — is it a place that holds fond memories for you?

Lance STROLL: Absolutely. A very memorable day — being on the podium was extremely special. Kevin said it — every year here there's opportunity, the races are pretty chaotic, especially the last four or five laps. Last year, with the safety car restarts, there's always positions up for grabs, so we'll see what this year has to offer.

Q: Nico, you obviously haven't had the results at this venue, but do you enjoy the challenge of racing here?

Nico HULKENBERG: I do. It's a spectacular track, it's super-fast, it's massively challenging, a little bit crazy as well, in a positive sense. Racing's good with all the towing that's going on, obviously into Turn One that's your best shot, but the scenery, the setting, just makes for good racing. It's pretty entertaining from inside the car as well here.

Q: Antonio, moving on to you. This will be your first time racing in Formula One here, but you had a double win in what was GP2 in 2016. How excited are you to get out there in an F1 car?

[adinserter name="GOOGLE AD"]Antonio GIOVINAZZI: Yeah, it will be my first time in F1 but like you say I have good memories here. Back in 2016 I took my first in GP2 and then double win for the races. So I'm looking forward to it; I know it's a difficult race, like Kevin said a lot of safety cars and a lot of things during the races, so yeah, looking forward to race here in F1.

Q: We'll stay with you, Antonio. Frédéric Vasseur, your team principal, said he felt the team let you down in China. You've had three difficult races to start the season — do you feel that so far you haven't been able to show your true potential this year?

Giovinazzi: I think we are only in the beginning of the race, we are a team, and like the team is believing in me, I believe in the team. We need to just keep working and I'm sure the results will come.

Q: Nico, if we look at things from a Renault perspective, you've had a couple of DNFs, which you say are frustrating, but is it more a feeling of frustration at those results or encouragement at the pace the car has shown?

Hulkenberg: A bit of both, to be honest. Obviously you have to have the hiccups and the DNFs, it's not great. Especially in the early part of the season — it's good to get points under your belt, just get them on your account. But on the good side, the pace has been there. At every track that we've been to either both or one car has been in good positions and managed to score decent points, so we feel we have a strong baseline. Obviously the midfield is still very very tight, and the top three still seem well ahead. It's about maintaining that, keeping momentum, and making sure we make the car faster week by week.

Q: Lance, moving on to you. Racing Point, or Force India as it was, has traditionally developed its car very well and come on strong during the season. What's the atmosphere like in the team at the moment as you look to chase the pace of Renault and Haas?

Stroll: Yeah, that's the goal. It's a development race all the way to the end of the season. The midfield's very tight; it's not a secret. Every tenth counts at the moment, so that will be the focus for the rest of the season — to develop the car, try and pick up as many points as we can over the course of the year.

Q: Kevin, returning to you. Haas has shown some great pace in qualifying but struggled in races. Guenther Steiner seems a bit pessimistic about chances this weekend. Are you a bit more optimistic that you can be fighting for points here?

Magnussen: I would say you always go into the weekend hopeful and positive, looking forward to it. Theoretically, it's not a track that will in theory help our issues, or at least the issues that we think we have. But, again, we've scored points here with a slow car, and I don't think we have a slow car this weekend. We have a fast car, it's just that… You know, we've had both cars in Q3 at all three races this year and then we've been kind of like the second-slowest team in the race almost in all three races also, so there's clearly an issue there that we need to fix. I hope and think that it will just be a matter of time until we find that problem.

Q: (Christian Nimmervoll) Antonio, you mentioned during winter testing that you're going to drive as much as possible like Kimi's driving style in order to help the engineers with setup and development direction. Do you think that did any damage to your performance in terms of you not being able to follow your natural instincts?

Giovinazzi: I don't think so. I think in Melbourne we were fast and I just had an issue in the race with a crash on Turn One. Then in Bahrain I was just a half-tenth from Kimi and in China was just a difficult weekend – but so far I think it's not to the main issue, I would say. Of course, Kimi has a different driving style from my one but, to be honest, we're quite on the same way and so far we'll keep working like that and I'm sure when the luck is also on our side, the result with come.

Q: (Valentin Khorounzhiy) Question to Kevin. There seems to have been the suggestion that already there are some fixes in pace for your problem of tire warm-up on the car in Baku. Can you elaborate what those fixes are – and do you expect a real, tangible impact from them here already?

Magnussen: Well, we can't say there's been a fix. We've changed stuff and tried to come up with some things that could be the fix but it's not like… it's one of those things where you try to figure out what is the problem, and why it's happening, and then you find solutions. I think we're still in the process of understanding what exactly is the problem, and then after that we need to find a fix. So yeah, we have come here with some things that we hope can help the situation – but we will see how it goes.

Q: (Hector Sagues) How much of an advantage has it been having Daniel Ricciardo in the team, compared with other team-mates at Renault in the last two seasons?

Hulkenberg: Well, obviously he's a very strong, good driver. Another thing in China, you saw he has arrived at Renault, feels more at home and can extract everything from the car. Obviously also very experienced and he has some real good feedback so far. Good thing is we feel the same way about the car and what we look for from the car and from the team, so I think it's been fairly positive and very productive – so a good strong addition.

Q: Just on the topic of team-mates, for two of you it's a new team-mate this year. Lance, what's it like working with Sergio and coming to a circuit that he's been particularly strong at in the past?

Stroll: So far, so good. He's a very experienced driver, he's been with the team a long time. We share a very similar opinion of where the car stands at the moment, and that's always good to help the team develop for the future. So yeah, early days but we've been having a good working relationship up until now.

Q: And Antonio, you knew Kimi from your time working at Ferrari but any surprises racing alongside him in the same team?

Giovinazzi: No. I think the same. To have Kimi as a team-mate is just a help for my side. He's a World Champion driver with a lot of experience so it's just good for me, good for the team as well for the feedback and the development of the car. Really happy to have him as my team-mate.

Q: (Jens Nagler – Bild) Question for Nico. We've seen you adopted a puppy. You posted it on your social media. Is that kind of a mascot because of all the bad luck you had in the last races?

Hulkenberg: I think you want me to say yes – but not really. It's just one of those things. I've been a dog fan for a long, long time and now felt it was time to get one. Not adopted, just got it.