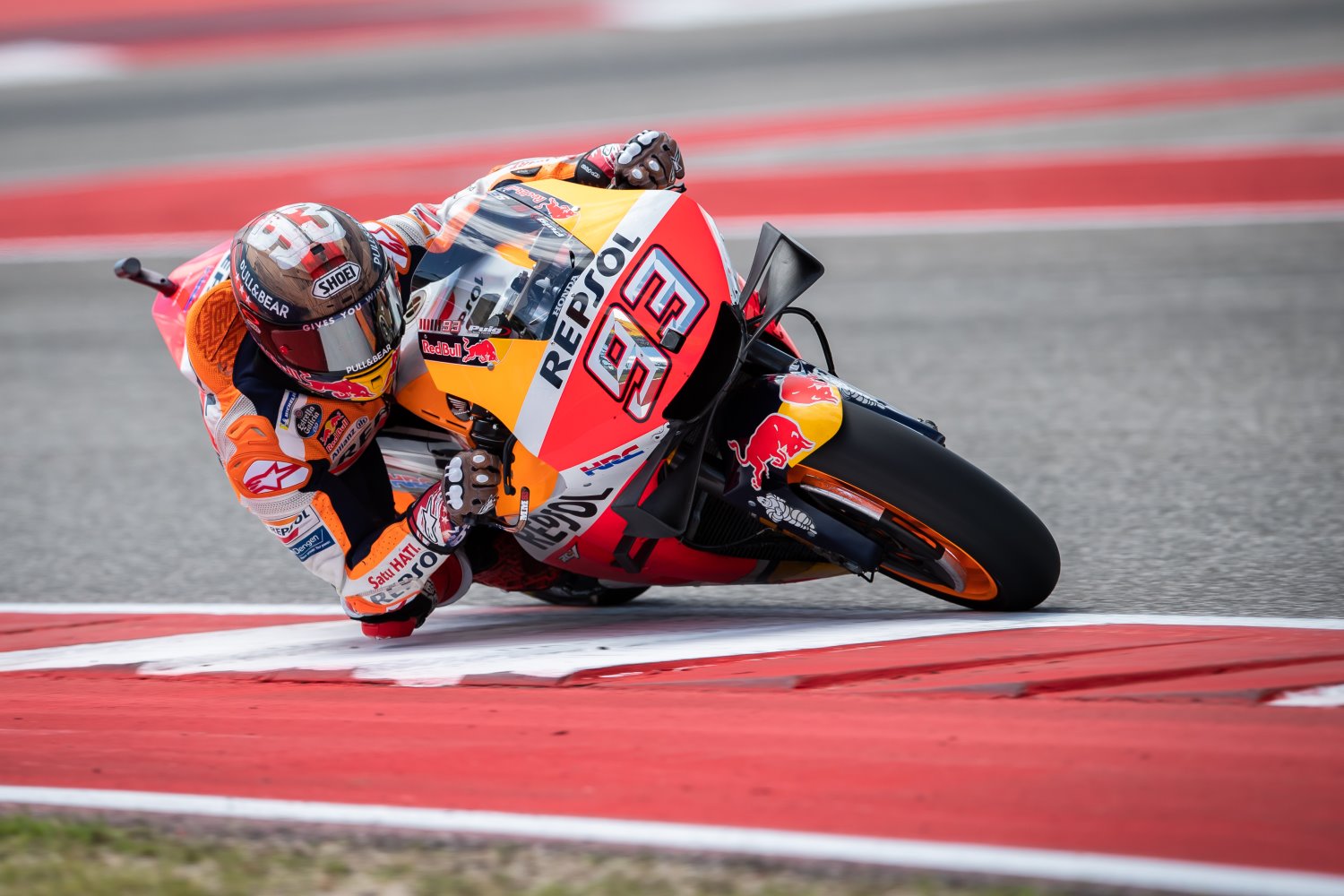 Marc Marquez charged to his seventh consecutive pole in Texas.

After horrendous weather throughout the morning in Austin, thankfully it was beautiful blue skies above the Circuit of the Americas for qualifying. Normal service was resumed at the beginning of Q2 as Marquez slammed in a 2:03.787 straight out the gate, chasing down teammate Jorge Lorenzo – who topped the timesheets in Q1 – to put in the best time of the weekend. Lorenzo then encountered what looked like a chain issue with his Honda machine heading onto his second flying lap behind the number 93 – a Marquez-style park it and run down pitlane followed for the five-time World Champion.

Meanwhile, Marquez’ scorcher of a time was seemingly well out of site as the riders completed their first flying laps, Maverick ViÃ±ales (Monster Energy Yamaha MotoGP) a full two seconds back before his teammate Rossi jumped up to second, 0.733 the gap. No one could get closer than that to Marquez after the first runs though, with Rossi emerging as best of the rest ahead of Jack Miller (Pramac Racing), ViÃ±ales, Alex Rins (Team Suzuki Ecstar) and Crutchlow.

[adinserter name="GOOGLE AD"]The riders emerged out of the box for their second time attacks, with Marquez unable to better his sensational first lap at the first attempt on fresh rubber. But it wasn’t the same story for his rivals behind, with Rossi improving to move within three tenths of P1, with Rins and Miller exchanging laps good enough for the final front row slot just behind. However, neither would occupy P3 for long as Crutchlow crossed the line to displace the duo, the British rider just 0.087 off Rossi.

Marquez still couldn’t improve his time but in the end, it wouldn’t matter. Almost everyone backed out or couldn’t better their final laps and so the grid was set, with your front row in Texas consisting of two Hondas sandwiching a Yamaha – Marquez heading Rossi and Crutchlow. This is Rossi’s first front row since Malaysia 2018, while Crutchlow starts on the front row for the first time since Assen last year. A tasty row one in Texas.

Miller took top Ducati honours in P4 and just behind the Australian was a certain Pol Espargaro on board his Red Bull KTM Factory Racing. The Spaniard having a stellar Q2 session to secure KTM’s best MotoGP™ qualifying position in fifth, just 0.685 from pole, with ViÃ±ales improving on his last lap to grab a second row start in P6.

The Spaniard’s lap knocked Rins down a place to seventh, this the Suzuki rider’s best qualifying of the year to make it five manufacturers in the top seven, with Q1 graduate Danilo Petrucci (Mission Winnow Ducati) eighth in Americas GP qualifying. It’s Fabio Quartararo (Petronas Yamaha SRT) joining the Spaniard and Italian on row three in ninth, with the Frenchman getting the better of teammate Franco Morbidelli – P10 for the latter. After progressing through Q1, Lorenzo will lineup in P11 for Sunday’s race, with rookie Francesco Bagnaia (Pramac Racing) twelfth in his first Q2 session – the Italian crashing unhurt at Turn 1.

One of the major talking points from qualifying was the absence of Andrea Dovizioso (Mission Winnow Ducati) in Q2. The Italian was unable to progress through Q1 after losing out to his teammate Petrucci and will have to aim for the podium from 13th – how costly will that prove to be in the Championship come Sunday evening?

The Repsol Honda rider suffered a broken chain after the first lap of Q2 at COTA and had to go running back to his box!

Well, we’ll find out soon enough. Rossi is looking lively and will aim to ruffle Marquez’ feathers on the opening lap or two to try and make life difficult for the King of COTA, but can anyone stop the seven-time Champion from claiming a seventh consecutive win in Austin?

“I’m happy to be on pole position but for tomorrow nothing is certain yet. Today we were fastest and got pole, but no one knows about race pace or tyres yet as we lost FP3. We will have to work well in Warm Up to make up for the time we sadly lost to the weather. After Warm Up we will know more but there are many people who could be in the fight."