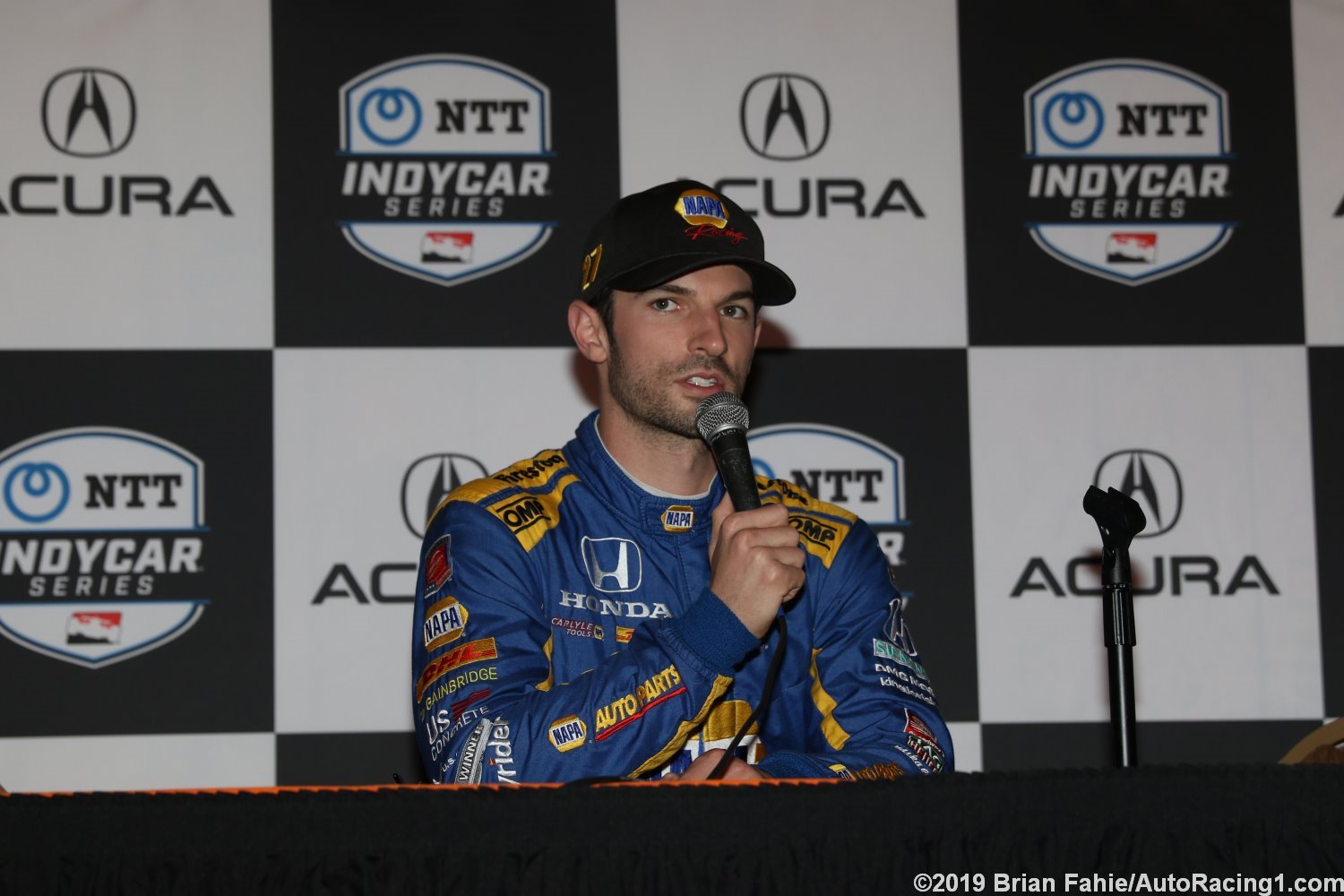 THE MODERATOR: We welcome up here the defending winner of the Acura Grand Prix of Long Beach, Alexander Rossi. You're a star, man.

THE MODERATOR: Talk us through your morning session. You didn't run many laps this morning. You're still in the top five.

ALEXANDER ROSSI: We got a puncture pretty early on. We only get so many tires allotted per race. Because the car seemed pretty quick, we didn't use one.

It's unfortunate. Honestly, the track was absurdly dirty. I don't really know what happened in terms of the some of the prep that went on yesterday. We walked the track. Even this morning, it was pretty bad. Here nor there.

Race car was fast. Ryan was P1 obviously. I think we have a good shot to continue the momentum this afternoon.

THE MODERATOR: You've been here a number of times. Essentially it's the same circuit. What kind of new things can you learn on the track from year to year?

ALEXANDER ROSSI: Well, they changed the curbs. We're dealing with city streets, right? You have municipal kind of situations to manage. The curbs last year, after the end of the race, were deteriorating quite a bit in our race. They changed those. You want to see how aggressive those are going to be.

Obviously with the temporary structure, you're looking at the condition as well. You kind of guess your start setup a bit based on how low grip you assume it's going to be.

[adinserter name="GOOGLE AD"]THE MODERATOR: Season so far has been OK. You're up there in the hunt for the championship. Haven't gotten a podium finish yet. Knocking on the door. Do you feel good about the way things are going this season?

ALEXANDER ROSSI: Yeah, it's OK. I think fifth in St. Pete was really all we had. We were obviously on track for a pretty good result in Austin. Again, in Barber I think we had a third-place car. The yellow hurt us in the end, allowing guys on the two-stop to make it.

I think the general pace has been good. We haven't been really dominant any weekend so far, so we've just kind of been collecting points where we can. Obviously this is one that's circled on our calendar where we need to put it all together, get a lot of points. I'm hopeful we can go out and do that over the next couple of days.

Q. Obviously since your rookie year, you broke out big with the Indy 500, last year second (in the NTT IndyCar Series point standings) because of a bad day at Sonoma, last year you won this race. What do you have to do to make the final step this year, to get the P1 for the end of the year, ride that momentum?
ALEXANDER ROSSI: The big thing is, as I said before, minimizing the bad days. Last year, if we look at us compared to Scott (Dixon), we were pretty much the same across the board except the days where I had a 12th or 15th, he had a 5th or 9th. I think a good example of that was Austin. We got burned by a yellow. We were starting pretty far back on the last restart there. We were able to get up to 9th. Kind of damage limitation some weekends.

Barber, we've never had a fast racecar there. To get away with a top five kind of feels like a win a little bit. It's all about making the most out of the difficult weekends, then capitalizing on the weekends where you should be strong.

This weekend certainly is one of those where we need to make sure that we dot all our Is, cross our Ts, make sure we can capitalize on the races where we know we're going to have a pretty strong performance.

Q. Last year you won here from pole. How important is it to get that pole?
ALEXANDER ROSSI: It's very important. I mean, I think aside from Indianapolis and Pocono, I think pole is critical pretty much everywhere we go. There's a huge advantage that you have from running in clean air that allows you to make the tires go much farther. You can kind of dictate your own strategy in terms of what you're doing by being able to set the pace. It opens up just a lot of doors and opportunities.

It's important. Is it critical here? No. But it certainly makes your day quite a bit easier.

Q. I believe the tires this weekend are the same compound as at St. Pete where you said you weren't really strong. How do they compare to last year? Do you have any concern with that?
ALEXANDER ROSSI: I don't know this weekend because I didn't really do much driving this morning. But our performance in St. Pete was not related to tires. That was a separate issue that was resolved since then.

Yeah, I mean, Firestone usually does a pretty good job with being consistent with it from year to year. I think tires are the topic of the conversation after Barber last weekend. I think that was an issue that was identified. We've been assured that's not going to happen again.

I think we'll see this afternoon what the red tire does and how similar it is to last year, but I don't expect it to be much different.

Q. I think you said you've been collecting points through the first three races. Do you feel you need to take the next step or a breakout or jump-start or anything like that?
ALEXANDER ROSSI: No. I'd like a trophy because I'm just annoyed we haven't gotten one yet. No, I think we're very much in touch. It's a long season. There's so many guys now that we can talk about, list off that are going to win races this year.

You're not going to have guys win five races any more, I don't think. So it's about the days you're not winning, to be close enough, always being in the conversation, right? You can't have weekends where you go missing and qualify 16th, 17th. You need to always be in the top six, seven, week in, week out. I think if you can do that, naturally it's just going to come.

No, I don't think we're in a desperate situation by any stretch of the imagination. It's just more of, I want a trophy now because nine other people have one, so…

Q. In the offseason you said one of the things you learned from Scott Dixon is to finish the best that the car is capable of that day. Is the start of your season pretty much an example of you coherently doing that, following that type of game plan?
ALEXANDER ROSSI: Yeah, I guess. I mean, Austin was a situation that was out of our control. I think we were on for a pretty easy podium there, if not a win, with the eventual problem we had. I think Barber and St. Pete are probably an example of that, yes. Those two places were kind of just managing the situation that we had. We didn't have a car to win, so there's no point in risking anything to try and fight your way onto a podium or fight for one position, right? It's just about consolidating what you have on that day.

I don't know if it's hugely different than what we've done last year. I haven't been in a situation similar to last year yet. For sure, the lessons and the mindset and mental approach that we've worked to better over the off-season, I think we've been doing a good job of it so far. No complaints this year.

Q. You've been hurt twice now with the yellow closing the pits. Portland and COTA. As long as the pit entrance is not blocked, have you talked to INDYCAR, they're going to definitely keep the pits open as long as the entrance to pit lane is not closed, or is that still kind of a gray area?
ALEXANDER ROSSI: Well, there's no rule defining what constitutes a full-course yellow. I think (Race Director) Kyle (Novak) has done a very good job of trying his best when the situation allows to not impact the race with a yellow. COTA, he didn't have a choice, so no problem with that whatsoever. That's just the luck of the draw type of thing.

You go to Barber, I think he did a good job. I mean, we had Graham that was stranded on the back straight, wasn't in a dangerous position. There's going to be questions over Max, like, I don't know, a 50/50 one, right?

At the end of the day I think Kyle makes a conscious effort not to impact the race, but obviously at the same time safety still needs to be the number one priority and paramount regardless of how annoying or frustrating it would be on that particular day.

At the end of the day, COTA was 100 percent the right thing to do because regardless of whether or not there was a safety issue, cars couldn't get into the pit lane. A yellow was coming there no matter what.

Q. Talking about dirt track racing being a good steppingstone to pavement and INDYCAR. Have you done any dirt racing in your career?
ALEXANDER ROSSI: Other than the Baja 1000 in a truck, no. It's dirt. So no is the answer. I've talked to Conor (Daly) about his experience in the Chili Bowl.

Q. You are roommates?
ALEXANDER ROSSI: Not any more, thank God (laughter). We were, for sure.

Yeah, he's loved it, encourages kind of all of us to go do it. He says it's a great thing. I know I'd go there and struggle. Those guys are bad asses, good at what they do. Is it Christopher Bell? I've gotten to know him a little bit. I'm sure he would get into pretty much anything and go pretty quick.