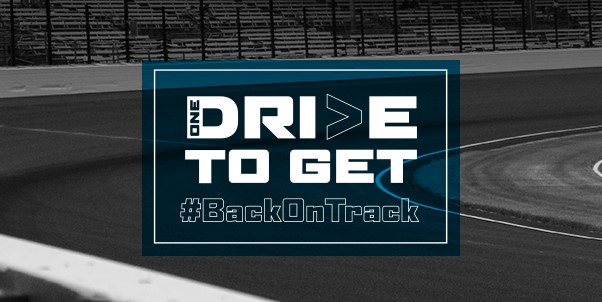 The "One Drive To Get Back On Track" auction was announced by INDYCAR and the Indianapolis Motor Speedway today to support non-profit organizations on the front lines of the fight against COVID-19.

The special virtual auction featuring rare and exciting ultimate INDYCAR fan experiences will take place from Friday, May 22 to Sunday, May 24 and will support the American Red Cross, All Clear Foundation and Gleaners Food Bank of Indiana. Those dates were the originally scheduled Race Weekend for the 104th Indianapolis 500 presented by Gainbridge, postponed until Aug. 23 due to the global health crisis.

Throughout the Month of May, INDYCAR's athletes will take over the NTT INDYCAR SERIES social media accounts to give fans exclusive, behind-the-scenes content and access. At the end of each takeover day, drivers will announce a special "One Drive To Get Back On Track" auction package sponsored by their team. The first driver takeover is scheduled for Thursday, May 7 and will feature Meyer Shank Racing's Jack Harvey. INDYCAR's event promoters and partners also will join in the fun, providing experience packages for the auction.

"There's no question this is going to be a different Month of May than we're all used to," Penske Entertainment Corp. President and CEO Mark Miles said. "However, I can't think of a more appropriate way for our motorsports community to come together this month, and most especially over the originally scheduled Indy 500 Race Weekend, than to join forces in support of the heroes on the frontlines of the fight against COVID-19. I'm excited to see the auction packages our drivers, teams, venues and partners contribute and look forward to an engaging month of content leading up to the virtual auction."

Alongside today's announcement, the Indianapolis Motor Speedway announced the first auction prize available to fans. The "Epic Racing Capital of the World Experience" includes the opportunity to wave the green flag on an Indy 500 practice day, take a track lap in a Speedway event car with IMS President J. Douglas Boles and dinner for four with the Borg-Warner Trophy and a former Indy 500 winner.

Unlike additional auction items, which will be available through the bidding process beginning on May 22, this prize will be awarded through a fan sweepstakes. Details on how fans can enter the sweepstakes will be announced in the near future by Indianapolis Motor Speedway.

The "One Drive To Get Back On Track" auction will be housed on indycar.com/backontrack in association with Legends, the official fan retail partner of INDYCAR and IMS.