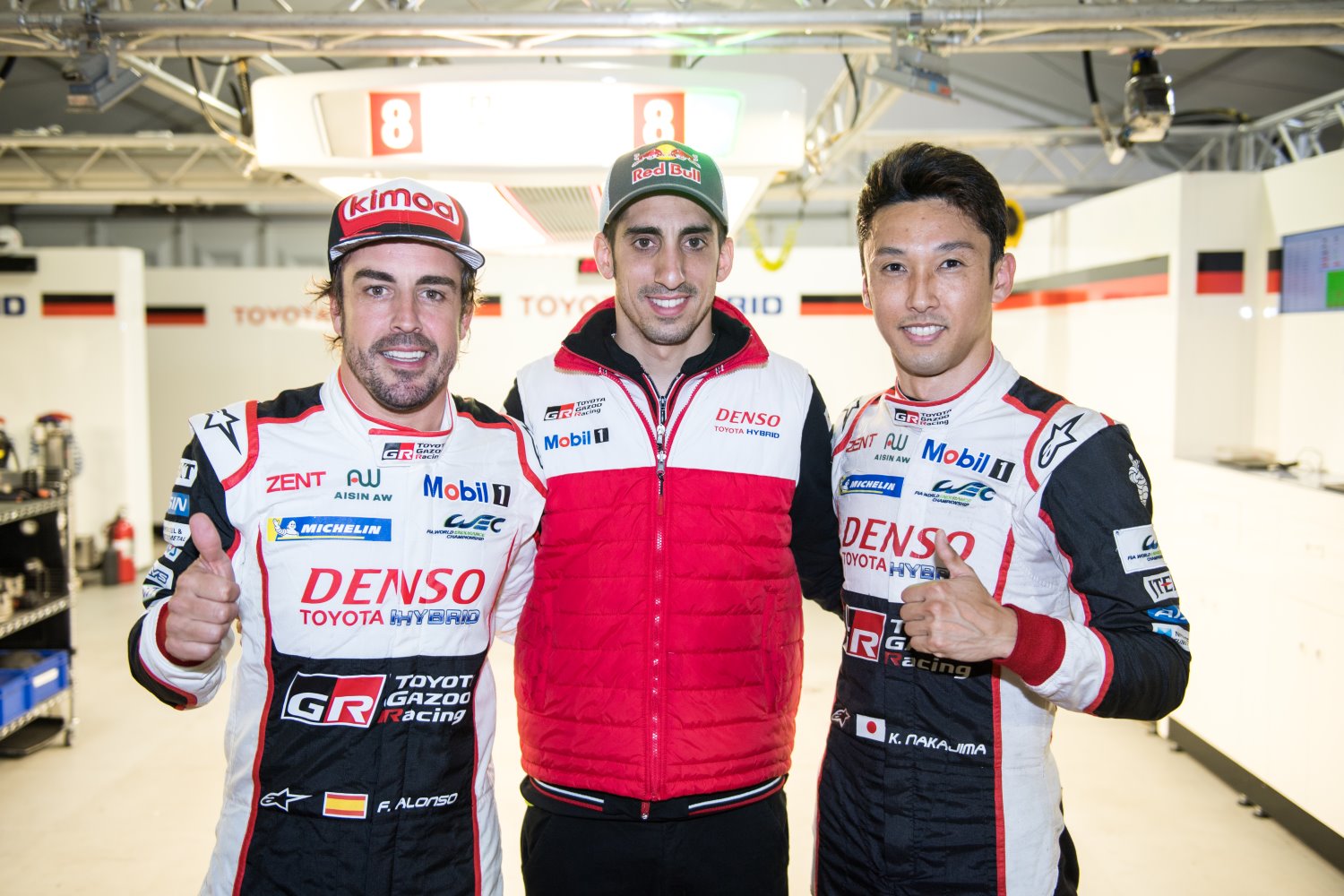 Fernando Alonso, Sebastien Buemi and Kazuki Nakajima led the 1000 miles of Sebring from pole to the checkered flag Friday in their #8 Toyota hybrid.

They finished almost 2 laps ahead of their sister #7 car driven by No. 7 team of Jose Maria Lopez, Mike Conway and Kamui Kobayashi and 12-laps ahead of third place.

The race between the Toyotas was decided when Lopez clashed with the TF Sport GTE-Am Aston Martin which resulted in floor damage that necessitated three minutes of repairs.

This dropped the No. 7 off the lead lap and left Alonso, Nakajima and Buemi clear to claim their third victory of the season and their first since last year’s 24 Hours of Le Mans.

With the win Alonso added another major event trophy to his mantle as he tries to win all the biggest races around the world.

The race finished under dramatic circumstances as a rain shower hit the track with just 25 minutes of the eight-hour event remaining sending all runners in to the pits for treaded tires.

The No.91 Porsche 911 RSR driven by Gianmaria Bruni and Richard Lietz claimed a dramatic last-gasp victory in the LMGTE Pro class as they emerge from the pits ahead of previous leaders the No.81 BMW Team MTEK car in final 15 minutes of race.

In LMP2, the newly collated trio of David Heinemeier-Hansson, Jordan King and Will Stevens dominated the category with a conclusive win in the No.37 Jackie Chan DC Racing Oreca-Gibson.

Sealing victory in the LMGTE Am class was the No.77 Dempsey Proton Racing Porsche team with Christian Ried, Julien Andlauer and Matt Campbell making it a perfect weekend after starting the category from pole position.

How Toyota Won It

The team's first race at Sebring began in bright sunshine and with air temperature of 28Â°C as Sebastien, in the pole-sitting #8, established himself as race leader from the beginning, with Jose putting pressure on just behind in the second-placed #7.

That pattern continued until a brief rain shower just before the two-hour mark. Soon after that the #17 SMP car crashed heavily, causing a full course yellow and then a safety car to repair barrier damage. That closed the field, bringing Kamui in the #7 closer to Fernando in the #8 and the battle resumed after 15 minutes.

Despite adverse forecasts, heavy rain in the local area missed the track and the TS050 HYBRIDs kept up a close fight as darkness fell. At half distance, Kazuki in the #8 was holding off a charging Mike just a few seconds behind, with both cars three laps clear of the third-placed #3 Rebellion.

But a titanic duel between the two TOYOTAs was brought to an early end after four-and-a-half hours when Jose, at the wheel of the #7, suffered a minor contact with the #90 Aston Martin. That required a change of engine cover and rear bodywork, which cost four minutes in the pits, putting the car a lap down.

With that clear margin, Sebastien in the #8 took a no-risk approach through the famously-difficult Sebring traffic, taking care to protect his lead. The #7 crew showed strong spirit to come back from the disappointment of losing a lap and set competitive times to comfortably extend their advantage over third place.

The final three hours of the race looked to be passing without major incident as the TS050 HYBRIDs once again demonstrated remarkable reliability on a circuit famed for being tough on cars and drivers. However, the Florida weather intervened and rain began to fall around half an hour from the end.

With the checkered flag approaching, the intensity of the rain increased and both cars pitted with 20 minutes remaining to change to wet Michelin tires. But as conditions worsened, both cars returned to pit lane to switch to extreme wet tires with the target of simply avoiding any incident and reaching the flag safely.

That became slightly easier when a safety car was called with only 12 minutes remaining due to an accident for an LMP2 car. With heavy rain continuing, even driving behind the safety car was challenging but Kazuki stayed calm and brought the #8 home for victory, followed by Mike in the #7.

Hisatake Murata, Team President: “I am very pleased that TOYOTA GAZOO Racing and our TS050 HYBRID is the first winner of the 1000 Miles of Sebring. Our visit to Sebring has been challenging but successful. Everyone in the team adjusted very well to the different requirements here and pushed really hard to achieve this result. Thanks to them and also a big thank you to the fans here in Florida; they have made our first visit here really special with their passion for endurance racing and their warm welcome. I hope they enjoyed the race and I wish everyone an exciting and successful Sebring 12 Hours tomorrow."

Mike Conway (TS050 HYBRID #7): “Another one-two is a good result for everybody on the team. We pushed hard all the way through and it was a nice fight in the first half of the race. We all had some close moments out there; you get so close to the GT cars. At the end the conditions were really tricky; it was like driving on ice, particularly on the concrete sections. It's a pity that we lost out today but we still have Spa and Le Mans coming up so we will keep pushing."

Kamui Kobayashi (TS050 HYBRID #7): “Car #8 did a great job and deserved this win. We fought hard but after the contact we could not challenge. Still we showed our spirit and continued to push in the second half of the race even though it was not easy. It's important not to give up. For the team, finishing one-two is a great result so thanks a lot to them for their hard work; the big preparation paid off here."

Jose MarÃ­a LÂ¢pez (TS050 HYBRID #7): “Congratulations to car #8; our team-mates did a fantastic job. It was a very hard race and from my side I was struggling a bit in traffic today. I was trying to catch Seb and I just misjudged a move on a GT car. We were unlucky but these things can happen sometimes and after that I just looked forward and kept pushing. Fortunately the car wasn't badly damaged and we could finish the race. I am pretty happy with second place in this hard race."

Sebastien Buemi (TS050 HYBRID #8): “I am really pleased to be in the middle of the podium again after quite a long wait. It was a tricky race because the traffic here is not easy. In my first stint Jose was really quick so I had to push. We wanted to make a gap but the #7 was within 10 seconds for many hours until they had the contact. I did the best I could to minimize the risk and stay cool. When the #7 had the contact we took it easy and just got to the end without any dramas."

Kazuki Nakajima (TS050 HYBRID #8): “It's great to win here in Sebring, especially after such a tough race. Maybe it looked straightforward from the outside but in my first stint I had a bit of traffic so it was already hard. When I jumped in at the end I knew what I had to do; get to the end without any risk. I was happy with the car in dry conditions but not at all happy in the end in the rain. Visibility and grip were amazingly low so I was really happy to see the checkered flag."

Fernando Alonso (TS050 HYBRID #8): “It is a happy day for us. We came here to this very difficult circuit and we did a lot of testing and preparation. We went into the weekend feeling confident we would have a strong race, particularly starting from pole position. From the lead of the race, we tried to manage the risk. The rain was very stressful but Kazuki did a fantastic job in difficult conditions to bring home another win at a historic venue for endurance racing."

Gianmaria Bruni – No.91 Porsche GT Team, Porsche 911 RSR LMGTE Pro “It was a very hard race from the start but we had a good car and the preparation we had for this race was unbelievable from the team. We worked very hard with the tire life on the test days. The race went our way from mid-race on. We were consistent, we were not the fastest but we did a good overtake on Ford and BMW and this was the key moments for us. Richard pulled away from the No.67 Ford at one point and we knew that the BMW had to do the splash at the end and it all worked well for us and I am very happy to get my first win for Porsche."

Will Stevens – Jackie Chan DC Racing, Oreca-Gibson LMP2 “It is great for us as it is our first weekend together and it wasn’t a plain sailing week for us but to come away with a win is great for us and the team also. We couldn’t have wished for a better start and we were strong in the race is very satisfying. We knew that if we could get the lead at the start we could pull away and control the race. The end of the race was pretty tricky especially on inters which was very difficult but we managed it, so it was a great race for us."

Matt Campbell – Dempsey Proton Racing, Porsche 911 RSR LMGTE AM “Especially around Sebring where the track is so difficult and bumpy, when it rains it makes it a little more nerve-racking. We weren’t sure how the last stint would go because we only had ten seconds to the Ferrari but we were able to creep away and obviously then the Safety Car came out. It is a fantastic result in what was a very tough race. The competition in the class today was really tough and tight so to get the win like we have today in such a tough race."