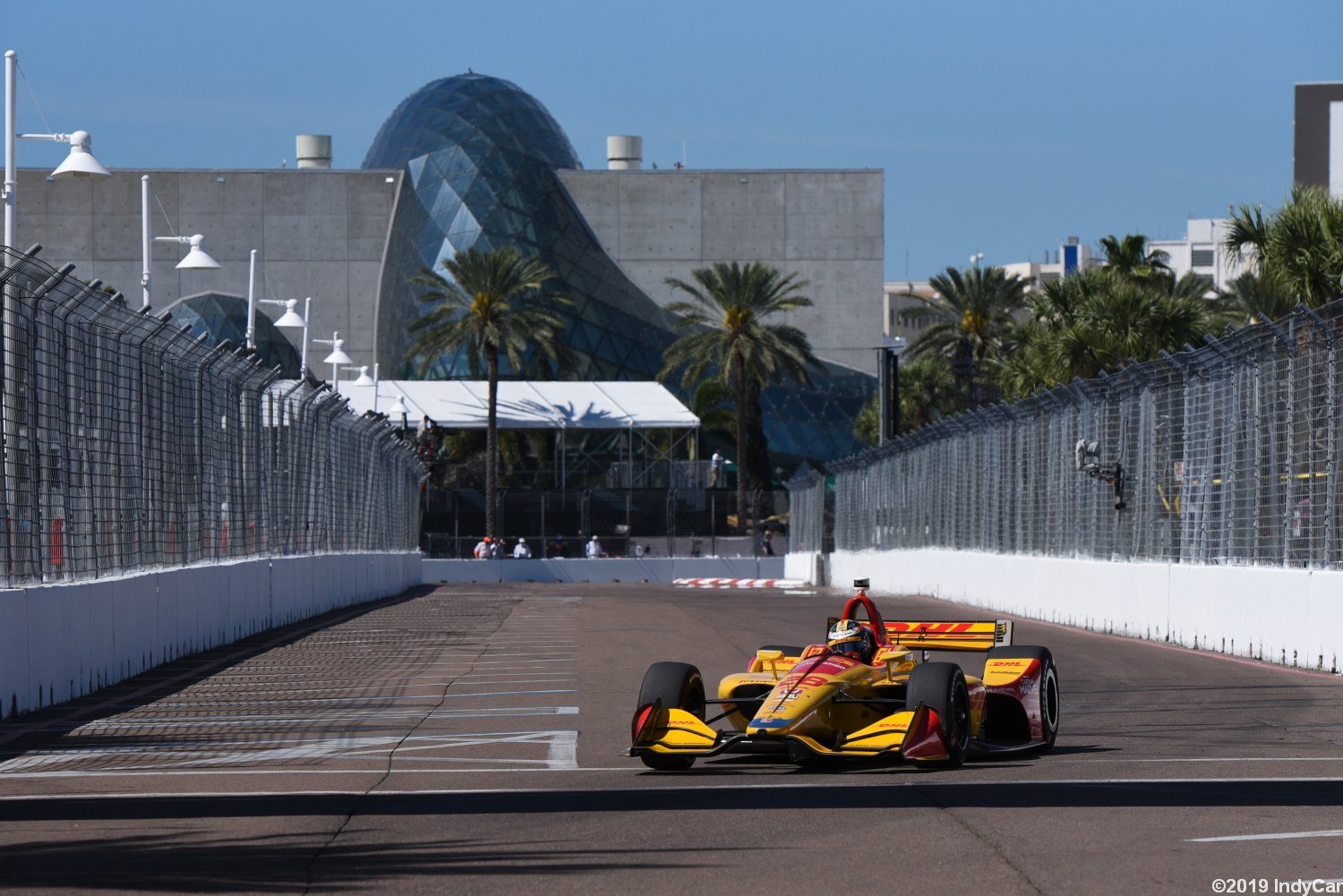 THE MODERATOR: We will get started with our afternoon NTT IndyCar Series press conference. Joined now by Spencer Pigot, driver of the No. 21 Ed Carpenter Racing Chevrolet, who finished second fastest in today's practice session. Spencer, a home race of sorts for you being our Florida native. How does it feel to be back in a race car and back on the streets of St. Pete?

SPENCER PIGOT: Yeah, it's great to be back. I think everyone in the paddock is excited to be at the racetrack again, and for me it's a special event. I grew up in Orlando, so always nice to start the season not far from home. Lots of friends and family out here this weekend supporting me, so it's a great way to kick it all off, and hard to pick a better place to start the season than here in St. Pete along the water, great views, great weather, and yeah, so far it's been a pretty good day for us at ECR.

We had a really strong second session there. It's obviously extremely tight still, so we still have work to do, try to find if we can go quicker and if we can try up and stay up at the pointy end of the grid.

THE MODERATOR: I'm sure overall very happy with how that second session went, but what are some things you and the team worked on together to find that speed in this session?

SPENCER PIGOT: Yeah, I mean, it's really just looking at different corners and prioritizing which ones are going to get you the most lap time. We've been really concentrating on the final corner, Turn 1, and a couple of the corners in the back there to get enough grip from the car, enough front grip to keep the lap time coming down. So that's what we focused on all off-season, and you never know if it's all going to play out when you get to the first race, but so far it seems to be heading in the right direction, and like I said, we'll go back and see where we would have been even quicker and hopefully try and put it all together tomorrow afternoon.

SPENCER PIGOT: No, I enjoy it. It's such a long off-season that just being back at the racetrack is a lot of fun, and I don't think friends or family add any pressure. They just kind of make it a more fun weekend for me to see them again. A lot of them I only see a few times a year, so it's nice to all come back together and celebrate not only seeing each other but the start of the IndyCar season, and yeah, we always have a good time in St. Pete.

THE MODERATOR: Taking the sort of bigger picture perspective on the start of the season, what are some goals and expectations that you have with Ed Carpenter Racing for yourself this year personally?

[adinserter name="GOOGLE AD"]SPENCER PIGOT: Yeah, I think we obviously want to win a race. To get my first win in IndyCar is a big goal. We want to be fighting at the front week in, week out, no matter what type of track we're at. We want to be more consistently quick, and I think we've made a good jump over the winter so far. We obviously — this is a street circuit. Next weekend will be something different, a new challenge, but the main thing is to try to get a win and just be up at the front more often.

THE MODERATOR: We'll go ahead and welcome in Ryan-Hunter, driver of the No. 28 DHL Honda for Andretti Autosport, who was fastest in this afternoon's session. Ryan, also a home — we have our two Florida natives here. We were just talking about Spencer about the fact that we have a sort of home race of sorts with friends and family joining, I'm sure, but talk about what this race means to you personally and the ability to kick off the season in that way.

RYAN HUNTER-REAY: Yeah, I think you ask anybody, they absolutely love it here. It's just a fantastic event, fantastic venue. The location, everything, and then, yeah, it's my home race. Spencer's, as well. It always feels important to do well here, not only because of that, but it's the start of the season. It kicks off the momentum that you're going to roll into the next string of races before we get to Indy. It's a fantastic layout, a lot of fun from behind the wheel, and this city, this town, the people here really support us. Yeah, it's definitely a great event. I think one of the best on the schedule.

THE MODERATOR: I know we're talking about practice and looking at the times from the perspective of the fact that we are looking at practice, but are you happy with the way the cars rolled off the transporter and your prospects for the weekend?

RYAN HUNTER-REAY: Yeah, we had a pretty promising testing program going for preseason, so it's nice to see that kind of transition here. It is day one, so I think you'll see some changes tomorrow and some comers and goers. It's tough to really keep up with this racetrack because it changes a lot. You're always trying to guess and make an educated guess at the same time, going with your gut on what you need to do with the setup because it is changing always with the rubber going down. But yeah, it's a nice start, but it's only day one.

THE MODERATOR: Speaking of Florida, you were recently honored at the Concours d'Elegance event in Boca Raton. What did that honor mean to you, and again, as a proud Floridian, what does that achievement mean to you?

RYAN HUNTER-REAY: It was a huge honor, absolutely, and it came with everything that we've been doing off the racetrack, Racing For Cancer. I certainly couldn't do that by myself; I've got a lot of great people around me to do it, but it is an initiative that I really kicked off, and we've gone a long way with it. And it's nice to be, you know, recognized for what I've done on the track but also off.

Lifetime achievement award, I'm not sure that's something you always want to get when you're 38, but I'll take it.

Q. Any change this year to the track, anything slightly different or any problem areas that have cropped up that are different from last year?
RYAN HUNTER-REAY: Not really. It's pretty much the same. This morning was a little strange. The track was pretty green, especially in Turn 1, like over the paint on the runway. It was slicker than I remember it being in years past in practice 1, so that's really the only thing I can think of.

SPENCER PIGOT: Yeah, don't really have too much to add. From last year, it feels pretty much the same. Every time you walk a street course or you think that it looks a little bit different, it looks a little wider here, narrower there, but then you go back and look at things and you go and talk to the people that built the track, and it's all the same dimensions and everything, so it's — yeah, all the same.

Q. Ryan, five Americans in the top six. I guess the other day was a good time to talk about that Captain America theme. What do you think of that? It looked pretty fierce out there and you've got another contender now sitting to your left.
RYAN HUNTER-REAY: Yeah, Spencer is doing a great job, and we do have a very strong pool of American drivers here in the IndyCar Series. It's great to see because, like I told you the other day, when I grew up, that's what I was rooting for. I wanted my guys, my American guys to beat the rest of the world. So, it's cool to see that, absolutely.

Q. With the aero kits becoming universal last season, going through that season, how does it feel now, now that you've had a full season of adjustments?
RYAN HUNTER-REAY: Yeah, I think everybody is a bit more accustomed to it. Coming off the manufacturer aero kit era, that was a lot of downforce, then showing up here. Some of these corners out here that weren't really corners before with the other aero kit were all of a sudden pretty challenging. That was an eye-opener for us. But I think everybody is kind of finding their way with that now.

Q. The first practice, the Hondas had the top six, and it looks like there's a little bit more parity in this session. I know there was some talk coming into this year that Chevy was kind of maybe at a disadvantage on the street and road courses. It's early, but after two sessions does it seem a little more balanced this year?
RYAN HUNTER-REAY: I think if you look at what happened last year, if you look at the two manufacturers, coming out of St. Pete, we thought, oh, Honda has got the advantage, and then we got to Indy, and it was like, oh, boy, that's not so much the case. Well, as the season panned out, you could tell that at Honda, I think was really on top when it comes to street circuits, low grip, drivability, these things. That's the pattern I think we saw last year, and it looks now that we're potentially seeing that now again.

I wouldn't be surprised to see the Penske Chevys and the Ed Carpenter cars up there again tomorrow, as well. Yeah, I mean — well, here's the guy from the other manufacturer, so go ahead and speak to that.

SPENCER PIGOT: Yeah, I think that everything is fairly restricted in what you can do, but Chevy has done a lot of work over the off-season. We've spent a lot of time with them trying to talk about everything that we can do better on every type of track, and I think we've made adjustments, and we've definitely taken a step forward. Still early days. Obviously being P2 in the first session shows that the Chevy is more than capable of being up front, and very happy to be representing Chevrolet, and I think that we'll find out more as the season goes on, but so far, I think we're all pretty confident in what we have on every type of circuit.