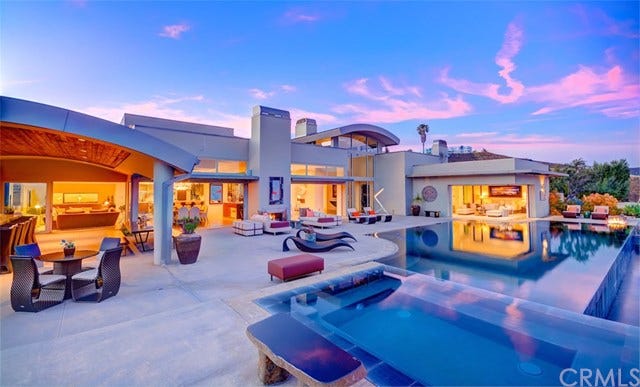 A lavish, cliffside California estate with doors opening to a Mediterranean-inspired desert scene, a meditation garden lined with 13 olive trees and a zero-edge infinity pool, hit the real estate market this week.

It "seamlessly marries the elements of fire, water, and air into one majestic dwelling," the listing for the Yorba Linda home with The Boutique Real Estate Group reads.

The 5-bedroom, 6-bathroom home is perched on three acres atop one of Orange County's most prestigious neighborhoods. When Rahal bought the estate in November 2017 for $6.1 million, it was the most expensive home ever sold in the city, according to the Orange County Register.

Yorba Linda is a suburban city in the northeastern part of the county, about 37 miles southeast of downtown Los Angeles.

Rahal's mansion was built in 2011 for Carlito Jocson, an executive with Yard House restaurants. It features floor-to-ceiling windows, his and hers walk-in closets, a 1,200-bottle temperature-controlled wine room and 13-person home theater.

The kitchen inside is restaurant-caliber, the listing says, and the outside kitchen area features a hearth-style pizza oven, a disappearing entertainment center and two sparkling glass-lined fire pits.

Also outside is a basketball court, 4-car garage, full outdoor bath and room for a helipad.