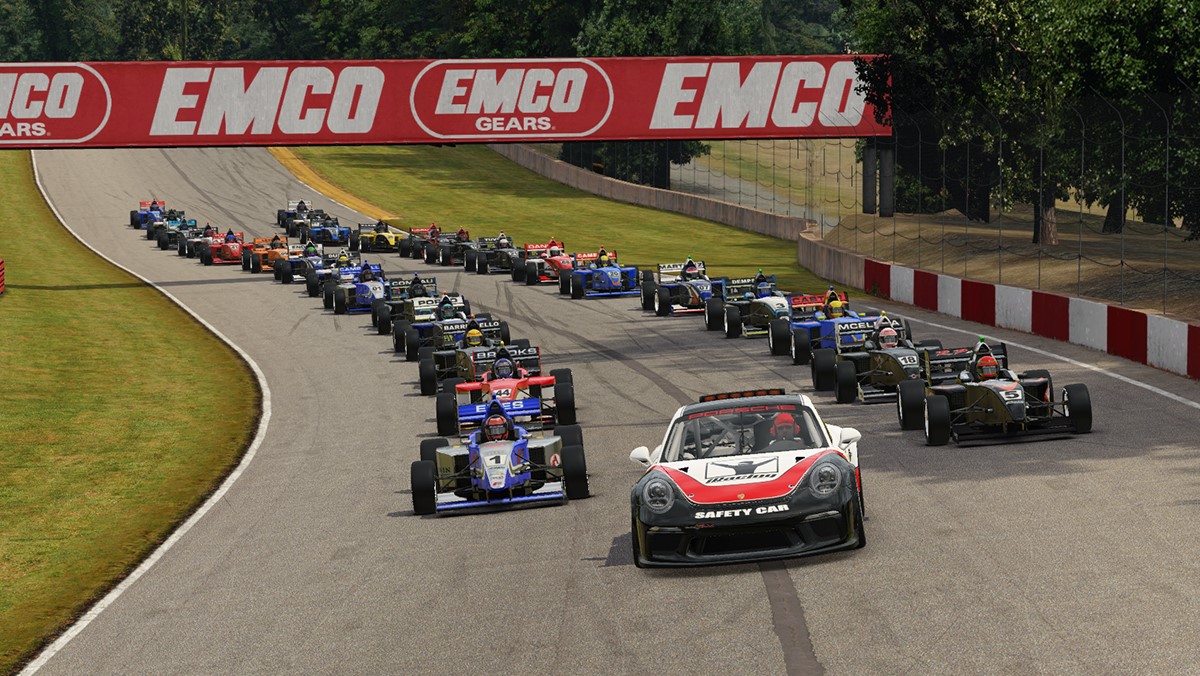 There were a pair of deserving winners when the inaugural Ricmotech Road to Indy Presented by Cooper Tires iRacing eSeries wrapped up this afternoon at a virtual rendition of the Mid-Ohio Sports Car Course. Braden Eves, last year’s Cooper Tires USF2000 Champion who lives less than an hour from the track in New Albany, Ohio, scored a dominant first eSeries victory for Exclusive Autosport, leading throughout the 45-minute, 36-lap race, while second place for fellow Indy Pro 2000 Championship Presented by Cooper Tires contender Phillippe Denes (RP Motorsport USA) was enough for the Californian to secure the first Road to Indy virtual championship.

Eduardo Barrichello, from Sao Paulo, Brazil, maintained his 100 percent record of podium finishes in the five-race series by taking third for Pabst Racing.

By virtue of his championship title, Denes elected the COVID-19 Solidarity Response Fund as the recipient of the $2,600 raised through driver entry fees and a $500.00 donation by TSOLadder.com.

Denes began the final event with a healthy 19-point championship lead, needing only a solid finish to put the title beyond the reach of his rivals. The 21-year-old from Carmel duly posted the fastest time in the usual, hectic 15-minute qualifying session to secure his third SimMetric Driver Performance Labs Pole Award, worth an additional bonus point.

But after enduring a disappointing weekend at his home track last year, Eves, 20, got the jump on Denes at the start and never looked back.

Eves extended his advantage to over four seconds before making his mandatory pit stop for a virtual fuel top-up after 22 laps, then maintained a remarkably consistent pace at the front of the field to secure the victory. Eves also became the only driver during the entire iRacing eSeries to claim an extra bonus point for posting an entirely incident-free-race. He finally took the checkered flag 2.958 seconds clear of Denes, who had to contend with some technical connectivity issues but was content to follow him home in second, secure in the knowledge that the championship crown was his.

After qualifying a slightly disappointing sixth in the closely matched field of 28 cars – whittled down from a total of 35 entrants – Barrichello took advantage of several cars tangling at Turn 12 on the second lap to move into third place. He then proceeded to enjoy a lengthy tussle with fellow Brazilian Kiko Porto (DEForce Racing) which continued all the way until lap 27 – long after the pit stops – when Porto lost control and spun off at Turn One. Porto’s only consolation was an additional bonus point for posting what was to stand as the TSOLadder.com Fastest Lap of the Race.

Christian Brooks (Exclusive Autosport), from Santa Clarita, Calif., Andre Castro, from New York, N.Y., and Legacy Autosport teammate Cameron Shields, from Toowoomba, Queensland, Australia, also were embroiled in the third-place battle for much of the race. Brooks and Castro came together immediately after their pit stops, dropping them from contention, although Castro recovered to finish eighth.

Shields, making a strong comeback to the series after missing the last three weekends, survived to finish fourth ahead of Singaporean Indy Lights Presented by Cooper Tire competitor Danial Frost (Andretti Autosport), who worked his way up from 13th on the grid.

Jacob Loomis (BNRacing), from Corinth, Texas, rose from 18th on the grid to sixth, narrowly ahead of Canadian former Radical series champion Antoine Comeau, who enjoyed a strong run for Turn 3 Motorsport.

Braden Eves (#1 Road to Indy/Cooper Tires/MDRN Livery-Exclusive Autosport iRacing Pro Mazda): “This is a track that I’ve always wanted to do well at – we always have a lot of fans come out in real life. There’s always a lot of pressure to perform at the home event and I didn’t have the results last year so this is nice. It was a great race. I probably felt the least pressure today than any of the other races. Phil had some technical issues that helped us in the beginning, but I think I had the pace to win either way. I didn’t do a ton of practice but I felt as though I was prepped and ready to go. I made a mistake on my fastest lap in qualifying but it was a fun race and a really fun series. Awesome job by everyone at Ricmotech, the Road to Indy for putting this on."

Phillippe Denes (#5 Fire Fighters-RP Motorsport USA iRacing Pro Mazda): “I’m so relieved to get this, and so happy – it’s my first championship. I had technical difficulties with my computer through the whole race which meant that I couldn’t keep up with Braden and was getting run down by the pack behind me. I was just doing everything I could to stay consistent with the low frame rates. Luckily, I held onto it. It came back in the last moments of the race, which was too late by then for the race win, but I was able to hang onto the championship. Thank you to RP Motorsport, to my family, Fire Flighters, my girlfriend who supported me and especially the Road to Indy and Ricmotech for putting on such a great event."

Eduardo “Dudu" Barrichello (#22 Ale-Pabst Racing iRacing Pro Mazda): “It’s a pleasure to be on the podium for the fifth time in a row. I had a poor qualifying session – I flipped on the last lap, which is not ideal. I had an incident in front of me early in the race, but I just concentrated on pushing forward. My pit stops were good, for the first time in this series, so at least I improved on that! I had some good battles out there, especially with Kiko Porto. I’ve been racing against him since I was 12 years old and we’re very good friends, so we knew we weren’t going to hit each other. Same with Andre Castro. They both knew I was fighting for the championship, so it was very clean out there. Congratulations to Phil Denes. He’s very good and very fast, and to Braden as well for the race win, but I’m happy to be vice champion."

Johnny Unser, Assistant eSeries Race Director and Indy Pro 2000 Presented by Cooper Tires Race Director: “The drivers have come a long way from Round One. We have incidents but I do think they’re treating it like a real race. They’re wrecking all the time in practice, but during the race, they’re being much more careful and have done a really good job. You never want to see a car back out onto the racetrack or when a frontrunner gets taken out.

“The officials with Xtrememotorsports have great resources to keep track of the race. We have numerous camera angles on every car all the time so the resources are really unlimited, and I go back and look at the replays and give a thumbs up or thumbs down on their calls. I have help from some very experienced people. It took a lot of people to make this happen, from Ricmotech, Cooper Tires and the Road to Indy. It’s been fun to see it all happen!"