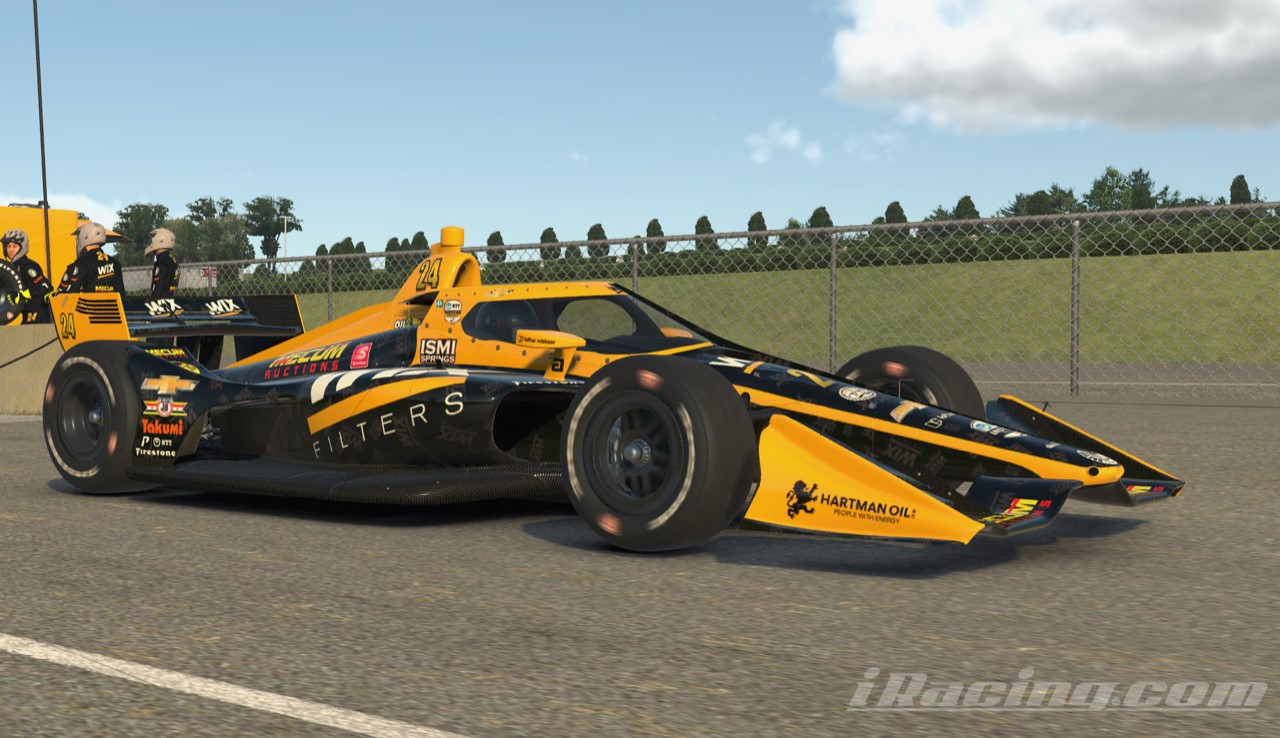 Young Sage Karam is excited to get back to a road circuit event in the six-race INDYCAR Challenge iRacing campaign after his impressive performances in the opening two virtual racing contests at Watkins Glen International and Barber Motorsports Park.

In those two races, Karam drove the No. 24 Dreyer & Reinbold WIX Filters Chevrolet to the pole position and victory at Watkins Glen and the pole at Barber before an incident with a lapped car eliminated his charge to a possible win.

Of the 90 road racing laps in the INDYCAR Challenge, the 25-year-old driver from Nazareth, PA, has led 67 circuits. In fact, Karam is the only driver to lead in each of the first four INDYCAR Challenge (Watkins Glen, Barber, Michigan and Motegi) with a total of 121 of 288 laps.

Now, Sage is anxious to return to the virtual road racing competition this Saturday, April 25, at the fast 3.426-mile, 20-turn Circuit of the Americas (COTA) east of Austin against another strong NTT INDYCAR SERIES field scheduled for 2:30 p.m. EDT.

“I am ready to get back on the road circuits again," said Karam, the former Indy Lights and F2000 series champion. “Obviously, we were strong in the first two races at Watkins Glen and Barber. We didn’t have much lucky at Barber after leading a bunch of laps, but I think we’ll have a strong effort at COTA. It’s a great road course and should be another exciting race for the fans."

Despite finishing seventh (Motegi) and 14th (Michigan), Sage did show well at the oval tracks including leading the most laps at Michigan (49) and recording the fastest race lap at Motegi (200.007 m.p.h.).

“We were fast at Michigan, but we got caught up in some traffic," he said. “I made a mistake in qualifying at Motegi and I had to start 31st. But the car improved in the race and we moved up 24 spots to seventh. We also had the fastest race lap. Now, we need to get back to racing up front at COTA."

An iRacing veteran, Karam has been working with a number of drivers who are making their initial iRacing showings in the INDYCAR Challenge including his Nazareth neighbor, Marco Andretti.

“Marco has been using my backup sim rig for the two oval races," said Sage. “He has run it a little bit before when he wanted to learn new tracks. I have upgraded my sim rig this winter and even built my own computer for the new rig. So, Marco has been getting up the speed very well in the backup. He had a good run going at Motegi but caught up in an incident. He is learning quickly about iRacing."

Karam, who is scheduled to drive the No. 24 DRR WIX Filters Chevrolet in a number of 2020 NTT INDYCAR SERIES events later this year in real action, also has been a regular in the worldwide Sports Car Series in iRacing and the Lionheart Racing Series for open-wheel cars.

“My iRacing experience goes back to 2007 when I went from karting to open-wheelers," he said. “Because I have not been a regular on the IndyCar circuit in recent years, I’m able to stay active through Sim racing and I believe it has helped me. I think some of the current IndyCar drivers can see improvement too in their INDYCAR Challenge racing as we all stay inside with the Coronavirus. I’m like everyone else who wants to go real racing as soon as we can. But this is the next best thing. I hope the fans enjoy it too."

This Saturday’s INDYCAR Challenge from COTA is set to be telecast on NBC Sports Network and www.indycar.com. Karam also has his Twitch channel for fans and media to watch his “in-car" camera at sagekaram24.