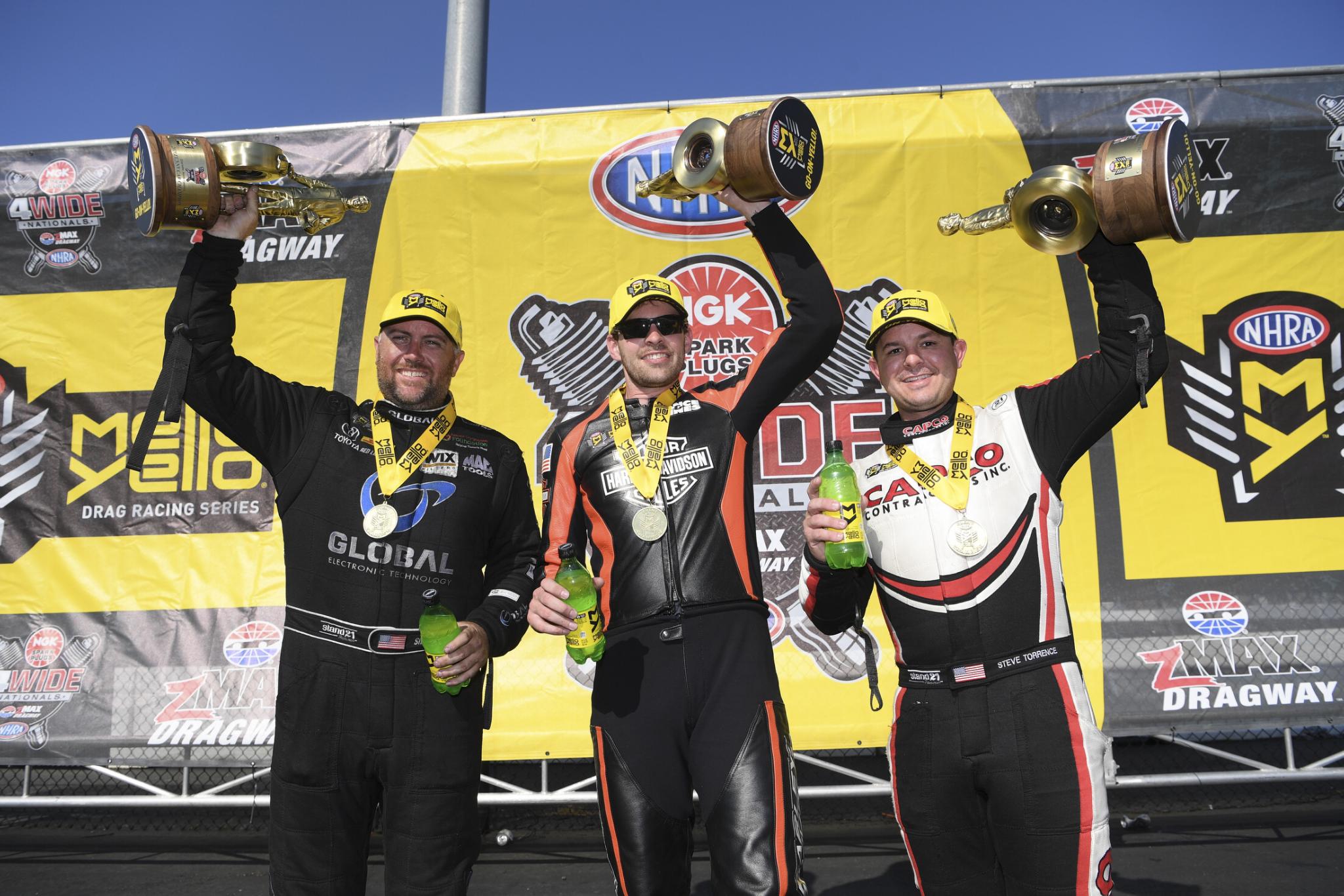 Shawn Langdon picked up his first Funny Car win at the 10th annual NGK Spark Plugs NHRA Four-Wide Nationals to become only the second driver in history to win in both the Top Fuel and Funny Car categories at zMAX Dragway. He is the 17th driver in NHRA history to secure victories in both categories.

Steve Torrence (Top Fuel) and Andrew Hines (Pro Stock Motorcycle) were also victors in their respective NHRA Mello Yello Drag Racing Series categories.
Langdon clinched his first Funny Car victory when he powered his Global Electronics Technology Toyota Camry Funny Car to an impressive run of 4.125-seconds at 305.08 mph. Langdon also secured his first Top Fuel victory at zMAX Dragway in 2012. He faced a final quadrant of Robert Hight, John Force and Matt Hagan. Hight finished as the runner up in the category.
"There’s so many things that I’ve gone through to get to this point," said Langdon. "The reason I’m here is because of the people I’ve been surrounded by. They’re the ones who picked me to drive the car and I’ve been so fortunate to get to drive for a legend like Connie Kalitta. Working with a guy like that, and then working with a guy like J.R. (Todd) who’s a teammate and champion, very talented. I bounce ideas off of him all the time. And then working with Nicky Boninfante who’s worked with some of the greatest drivers out here and to bring Del Worsham in, that has been a big key factor. Working with these guys has really elevated my game."

Reigning world champion Torrence piloted his Capco Contractors Top Fuel dragster to the winner’s circle for the first time this season with his pass of 3.778 at 323.19 taking out Leah Pritchett, Clay Millican and Terry McMillen. Millican came in second. Torrence is the sixth different winner in Top Fuel this season.

"Richard Hogan (crew chief) and Bobby Lagana (assistant crew chief) and every one of those Capco boys, they just instill confidence in you," said Torrence. "I hadn’t been driving with the most confidence. Maybe I was driving on the defense instead of on the offense. I changed my mindset and just went out there and did what I know how to do instead of thinking about it. In Vegas at the Four-Wide I got up there and let my mind get in front of my foot. We’ve had a lot of success here at zMAX. I really like this place."

In Pro Stock Motorcycle, Hines won with his run of 6.831 at 198.17 on his Screamin' Eagle Vance & Hines Harley-Davidson Street Rod to pick up his 50th career victory and is the first rider in NHRA history to make it to this milestone. He faced teammate Eddie Krawiec, Hector Arana Jr. and Ryan Oehler in the final round. Krawiec was the runner up in the category.

"The day went pretty good. It got hotter and hotter which made it tougher and tougher," said Hines. "Our crew is pretty good at persevering in different weather conditions and we had to do that all weekend long. Not one of those days was similar to the other."
The NHRA Mello Yello Drag Racing Series travels to Atlanta next week for the Arby’s NHRA Southern Nationals May 3-5 for the seventh race of the 2019 season.