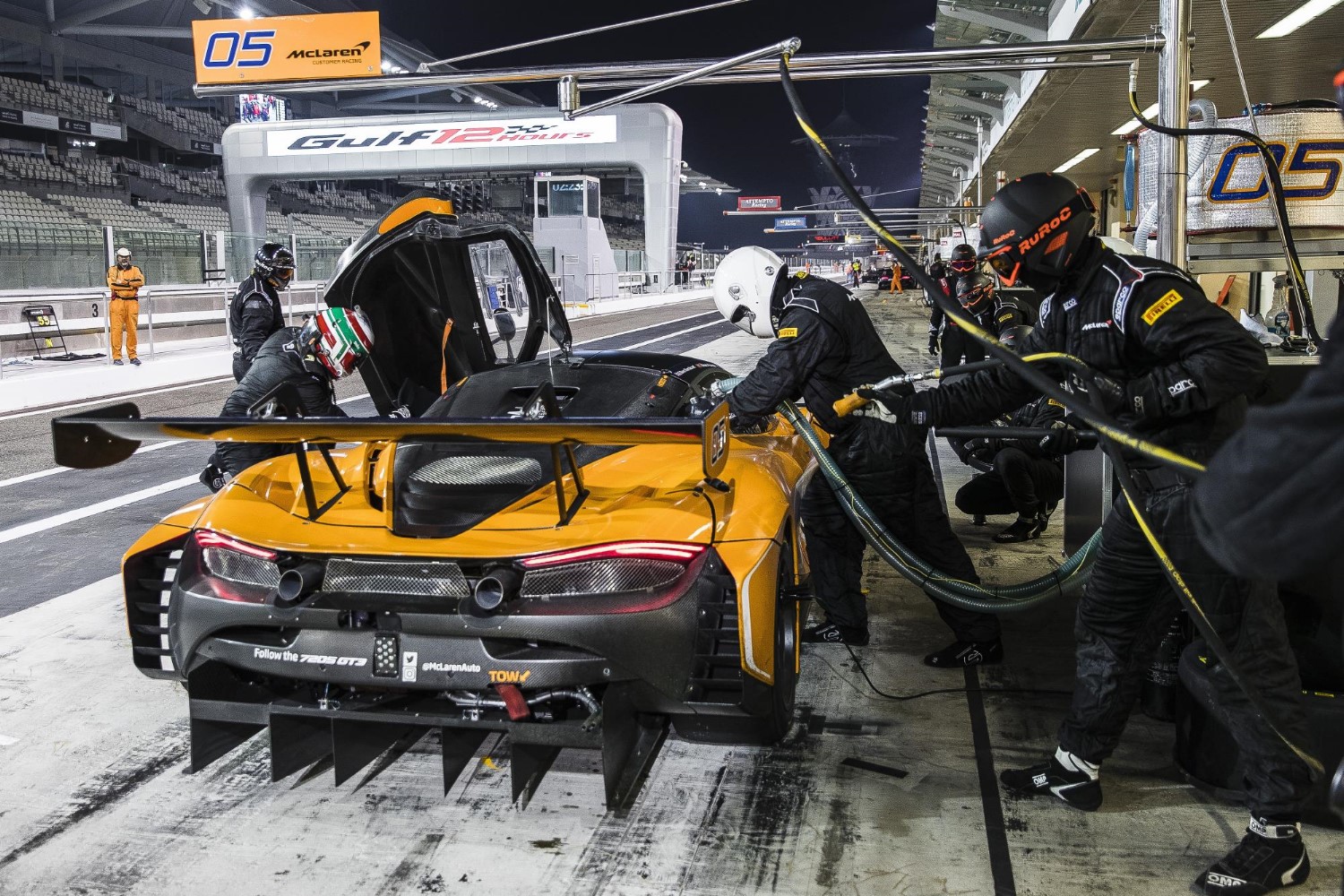 The brand new McLaren 720S GT3 came tantalizingly close to a stunning win on its global competitive debut at the Gulf 12 Hours in Abu Dhabi on Saturday December 15. The first GT racer designed and built in-house by McLaren Customer Racing dominated much of the second half of the race at the Yas Marina Circuit before suspension trouble dropped the car to a nevertheless impressive fifth place.

The #5 car’s pace – and a totally trouble-free run for 10 hours in the hands of McLaren Automotive Factory Driver Ben Barnicoat (GB) and his teammates Alvaro Parente (PT) and Shane van Gisbergen (NZ) – turned heads in a paddock that included top GT racing cars, teams and drivers from around the world.

The McLaren 720S GT3 run by McLaren Customer Racing was quick out-of-the-box, setting encouraging times during the three practice sessions on the Yas Marina circuit – home of the Abu Dhabi Grand Prix. It was in the hunt for pole position in its first ever qualifying session, with Barnicoat immediately topping the times. Co-drivers Parente and van Gisbergen continued to show impressive pace, however the car was pipped at the post by just half a tenth on aggregate times to take second in the GT3 class ahead of 16 competitors and third overall on the 33-car grid.

[adinserter name="GOOGLE AD"]The race itself was split into two six-hour events and in the first of these, Barnicoat took the 720S GT3 into the lead after just an hour of its racing career. The combined efforts of all three drivers and the McLaren Customer Racing team would keep the Papaya Spark-colored car in the hunt for the whole six hours, despite several incidents and two safety car interventions. The team reached the mid-point of the race in second overall, and ready to attack from the start of the second race.

The second part of the race showed the potential of the new McLaren 720S GT3, as the #5 car headed the charge to the flag. Within two laps van Gisbergen had taken the lead on the back straight, and by the end of Hour 10 the car had lapped the entire field.

Unfortunately, the dream of a win on the car's global race debut was over moments later when an issue with the right front suspension forced van Gisbergen into the pits for repairs. Rapid work from the team saw the car return to action after just 13 minutes and with Ben Barnicoat back behind the wheel, set about chasing down the leaders. In the closing 90 minutes, the gap was reduced and the #5 720S GT3 crossed the line an impressive fifth in the GT3 Pro class and eighth overall, completing 309 laps of the Yas Marina circuit.

“It's been a great start to the competitive life of the 720S GT3, which has proven itself against a world-class field and just as importantly, successfully progressed the development program. I am incredibly proud of the efforts of the team at the circuit and back in Woking, who have achieved this result against world-class opposition.

“The experience of going wheel-to-wheel with the teams and cars that our customers will be aiming to beat with the 720S GT3 in the future has proved invaluable as we continue to learn lessons about how to get the very best from the car. Add that experience to the vast amount that we have learned during the design, build, testing and development with the McLaren 720S GT3 so far and we are growing in confidence about the prospects for the newest racing member of the McLaren family."
Dan Walmsley, Motorsport Director, McLaren Automotive

The McLaren Customer Racing team will continue the 720 GT3 test and development programmed, ahead of homologation early in 2019 which will enable the car to compete in a variety of GT3 racing championships around the world.

The #11 Kessel Racing Ferrari 488 GT3 pipped rivals Audi and McLaren in a three-way battle as it pounced in the final two hours to retain its Gulf 12 Hours crown and clinch a famous, yet unexpected fourth successive victory at Yas Marina Circuit in Abu Dhabi.

It had looked set to be a dream World competitive debut for the McLaren 720S GT3 car which led from lap two of the second part of the race, when Shane Van Gisbergen passed Christopher Haase in the #88 Car Collection Audi R8 LMS GT3 which took the Checkered flag first after the opening six hours of the race.

The McLaren led thereafter, with no issues until Van Gisbergen returned to the cockpit with just under two hours remaining. The New Zealand driver picked up suspension damage to the right front wheel, leaving him to bring the car back to the pits for repairs.

Haase suffered once more 45 minutes after the race restart, dropping to third place and losing vital seconds after an incident with the pole position #4 Graff Racing Norma M30 of Jake Parsons, conceding the position to the #11 Kessel in the hands of Alessandro Pier Guidi.

The #11 Ferrari was not immune to its own problems, however, suffering a left rear puncture halfway through the 6 hours after Davide Rigon made contact with the #80 GDL Racing Lamborghini Super Trofeo Evo of Jim Michaelian, which dropped the Ferrari off the leading lap.

The Attempto Racing and Car Collection Audis continued to be in contention inside the top five, until the halfways mark when the second placed #99 Attempto R8 LMS GT3 suffered a severe puncture under braking. Klaus Bachler limped the car back to the pits, but with the front left wheel fully locked and the brake disc shattered, the team were unable to remove the wheel and were forced to retire the car.

With the front running cars beginning to dwindle, the door was left open for the #11 Kessel Ferrari when the McLaren slowed and Pier Guidi passed the #44 Attempto Audi of Giorgio Roda on the same lap.

The Audis attempted to respond, with the #88 Car Collection of Haase also getting by the #44 car for second place before pitting for Markus Winkelhock to attempt to cut the margin to the #11 Ferrari now in the hands of Rigon for the final stint. But Rigon’s successful experience was simply too great, and the Audis were left to settle for the podium on the competitive debut of the R8 LMS GT3.

The McLaren returned to the track with Barnicoat at the wheel, but having dropped to 10th overall, it was already five laps down on the #11 Ferrari and out of contention.

The GT3 Pro-Am class was impressively led throughout the race by the #27 Daiko Lazarus Lamborghini Huracan GT3 which finished the race in fifth place overall. It was followed by the #83 all-female driver line-up of Kessel Racing Ferrari 488 GT3, and the #98 Beechdean Aston Martin Vantage GT3.

The #4 Graff Racing continued its lead of the Prototype class, finishing 10th overall, ahead of the #7 Scuderia Vittoria Corse in 12th overall, a single place in front of the #70 Graff Ligier JS P3.

The GT Cup class was filled by the GDL Racing squad. As in the first half of the race, the battle for the class win continued to be between the #87 and #89 cars, with the former prevailing as they exchanged places early on, but from there surged ahead. The #80 GDL Racing Lamborghini Supertrofeo Evo took third place despite its earlier contact and repairs in the garage.

The GT4 class was led by the #3 Bullitt Racing Mercedes AMG crew, which includes 16-year-old British driver Olli Caldwell, the youngest driver in the race on his GT racing debut. The car remained ahead of the #50 and #90 Scuderia Villorba Corse machines throughout the second part of the race.

It was fitting for Davide Rigon to take the checkered flag and continue his spectacular record as the most successful driver in the history of the Gulf 12 Hours, as he clinched his fifth successive race victory and the seventh win for Ferrari. It also completed the fourth successive victory for team-mate Michael Broniszewski.

“It was only in the last hour that we thought we could win the race. We were very lucky that the McLaren had trouble otherwise they were too fast for us. But congratulations to both Alessandro and Michael who did a fantastic job today. I didn’t believe in the victory until the final 10 minutes.

“When I was hit by the Lamborghini, I had to make sure that I came back at slowly because I’ve experience that it could destroy the car.

“I love this track. I’ve had good team-mates for the past three years with a competitive car."

“Today we were not the quickest but we made sure that we were consistent. We had some issues, but so did everyone else. Until two hours to go, it was impossible to believe we could win. Davide did an amazing job in the final stint. The team made no mistakes."

“We had a very good strategy. I drove more in the early parts of the race and gave Alessandro and Davide the chance to drive for more of the later parts. We were still lucky with the slow down for the Audi and McLaren. We didn’t have any serious issues, and that was what really helped us."

“This was actually a 12-hour sprint race. The quality of the race is quite high, the level of drivers who participate are playing in the Pro league. I hope to see some more Pro-Ams here in future. Personally I’m not happy, it did not go as I would have wished for. I had some trouble with the tires, but we could make up for it as a team in the end. Luck is also playing a big part during a race like this and a good Balance of Performance.

“For me it was a perfect fit. The competition was tough and the battle with McLaren and Ferrari was great. Nevertheless, the McLaren was so quick, it was a shame that it did not finish. It was great to have Markus Winkelhock and Christopher Haase with me during this race, the input they gave me was very valuable and therefore I could develop my racing and achieve my personal goal. We have another race coming up in four weeks and I’m already looking forward to it and to the next Gulf 12 Hours of course."