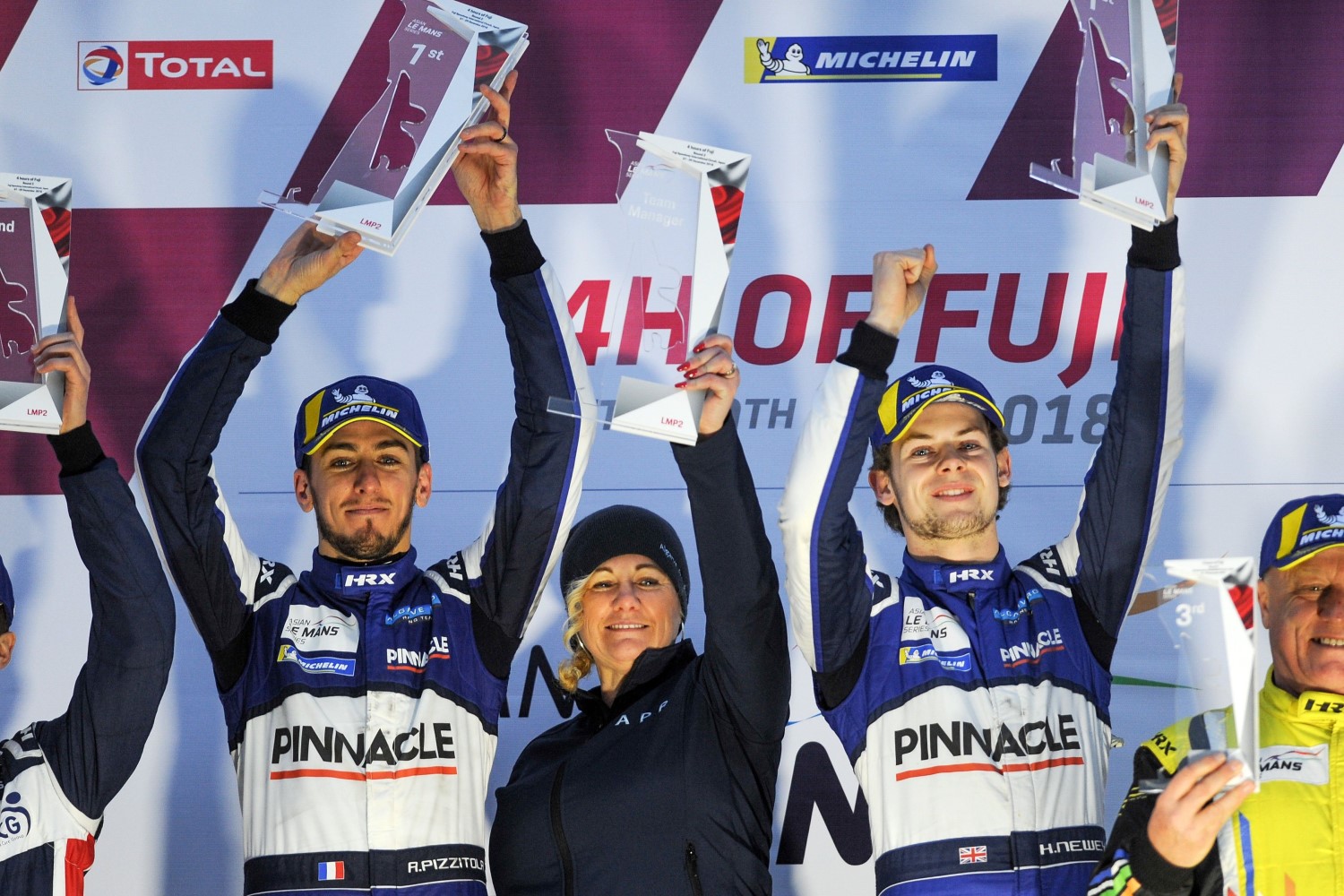 Algarve Pro Racing secured a critical race win in the Asian Le Mans Series 4 Hours of Fuji (7-9 December) to bring itself back into the fight for outright title honors at the midway point of the 2018-19 season.

Harrison Newey and Andrea Pizzitola possessed blistering speed, but had to stave off stiff opposition in changeable conditions to take the spoils at Fuji International Speedway, while Mark Patterson, Chris McMurry and Anders Fjordbach completed a tumultuous race in third in the Amateur Trophy classification.

The #24 pairing just shaded Mark Patterson, Chris McMurry and Anders Fjordbach , who were fourth and crucially ahead of ARC Bratislava’s and United Autosports’ Amateur Trophy challengers;

However, the Albufeira, Portugal-based team concluded qualifying for the Asian Le Mans Series 4 Hours of Fuji in second and fifth overall;

A 1m32.020s from France’s Pizzitola secured a front-row starting position for the #24 crew, while Fjordbach in the #25 ended up as the second quickest of the Amateur Trophy contenders in P5;

From second on the grid, Newey snatched the initiative from United Autosports’ Phil Hanson under braking for Turn 1, where a collision between Patterson in the sister #25 car and the #4 ARC Bratislava entry – one of Algarve Pro’s rivals for the Asian Le Mans Amateur Trophy – ensued;

Patterson, who tumbled to 12th on the opening lap, was served with a drive-through penalty for his part in the incident, but the South Africa-born American put on a strong recovery to breach the top ten before the first round of scheduled pit stops, when Chris McMurry took the reins of the #25 Ligier;

Newey set quick sector times to extend his lead over second-placed Hanson to 5.3s during the first 30 minutes, despite having to lap the Asian Le Mans Series’ GT contingent;

However, the pace slowed dramatically as rain began to fall at Fuji International Speedway;

Newey nursed the #24 Ligier back to the pits for fuel and wet tires, following a tentative in-lap that featured a spin at Turn 1 and a wayward moment at Turn 10;

Newey remained aboard the #24, but his call to pit one lap later than his nearest rivals cost Algarve Pro Racing time and meant he re-entered the race alongside United Autosports’ Hanson, who snatched the initiative at Turn 1;

Algarve Pro Racing’s deficit to the race leader grew to 16 seconds during the second hour, when #25 was handed two additional drive-through penalties for crossing the white line at pit entry and passing under yellow flags;

However, BRDC Superstar Newey made significant gains on race leader Hanson as the rain abated, more than halving the gap as the 4 Hours of Fuji reached mid-distance, when French racer Pizzitola took control of the #24 Ligier;

Pizzitola was soon a full second faster than Hanson, but an inspired and timely decision to switch to slick tires enabled Algarve Pro Racing to overturn United Autosports’ advantage and assume a healthy 20-second lead;

Shortly after, McMurry was ejected from #25 following a solid double stint, Algarve Pro Racing fitting slicks for Fjordbach’s push to the checkered flag;

French racer Pizzitola maintained a 20-second lead entering the fourth and final hour and only briefly relinquished the initiative as the final round of fuel and tires stops played out;

Algarve Pro Racing returned to the head of the field when United Autosports carried out the last of its scheduled pit stops, but a late Safety Car negated the Portuguese team’s advantage and the race would be decided during a tense 28-minute sprint to the finish;

Denmark’s Fjordbach ran at the leaders’ pace to drag the #25 car back up to ninth place overall and third in the Amateur Trophy classification, despite serving a fourth drive-through for speeding in the pit lane;

At the resumption of racing, Pizzitola kept a cool head, retaining first position and edging out a comfortable 16-second lead over ex-Formula 1 driver Paul di Resta to secure 25 invaluable points for the 4 Hours of Fuji victory.

In third place, and taking the win in LMP2 Am was ARC Bratislava in a impressive comeback drive. Early in the race the #4 ARC Bratislava Ligier JS P2 dropped back after an incident saw Miro Konopka tangle with another competitor. Ling Kang put in a solid middle stint to help the team climb up the order. After the safety car, and with Darren Burke driving, they closed the gap to the class leading #23 United Autosports Ligier JS P2 Nissan. After another tight battle, Darren caught and passed the #23 to claim 3rd place outright and the LMP2 Am trophy win.

In LMP3, just as in the Agile 4 Hours of Shanghai, it was the #65 Viper Niza Racing Ligier JS P3 of Nigel Moore that got the jump on the field again, running as high as 3rd outright in the opening stages of the race.

Ultimately the battle for the LMP3 class victory came down to the final moments of the race. After leading the class towards the end of the race thanks to a well-timed pitstop to change to slick tyres, the safety car proved to be poorly timed for Martin Hippe in the #13 Inter Europol Competition Ligier JS P3. After the race resumed, he had the #3 United Autorsports Ligier JS P3 of Kay van Berlo right on his tail. The battle between the two once the racing resumed was tight, with Kay getting the jump early, but Martin refused to give up, fighting for the position until the end of the race.

In the end it was Kay that took the victory by just 3.5 seconds, with Martin taking second. In third place was the #79 Ecurie Ecosse / Nielsen Racing of Antony Wells and Colin Noble. The pair put in a very strong effort to come back from starting at the rear of the grid to claim the final place on the LMP3 podium.

Hometown heroes, Car Guy claimed a very popular victory in front of the Japanese fans in their #11 Ferrari 488 GT3. After contact in the opening stages of the race, the team made an unscheduled pitstop, dropping them well behind the GT field. Takeshi Kimura, Kei Cozzolino and James Calado all drove strongly during the race, ensuring Car Guy claimed their second GT class victory from the opening two Asian Le Mans Series races.

In second place was the #51 Spirit of Race Ferrari 488 GT3 driven by Alessandro Pier Guidi, Ozz Negri Jr and Francesco Piovanetti. They also had a challenging opening phase of the race after dropping to the back of the order, before fighting their way back, making their second place all the more impressive.

In third place was the #66 Tian Shi Racing Team, Audi R8 LMS of Xu Wei, Max Wiser and Zhang Ya Qi. They were also the top GT Am entry.

The Asian Le Mans Series now has a month’s break now before the teams head to Thailand for the 4 Hours of Buriram on 12 January, 2019. The race there will be held on the Saturday to coincide with the very popular Children’s Day in Thailand.

Harrison Newey (#24 Algarve Pro Racing Ligier JSP2): “My stint was up and down, because the pace was unbelievable on the slicks and I pulled out a big gap, but I made a late call to box for wet tires and lost the lead. I regained a lot of the lost ground during the second half of my stint before handing over to Andrea (Pizzitola), who not only did a super job to keep an ex-Formula 1 driver behind, but pull 16 seconds on him. I’m really looking forward to the second half of the Asian Le Mans season. Buriram is a track I know from last year, when I raced well to second position. I hope to come back and win the race, especially as Ate (Dirk de Jong) will be re-joining us. We’re looking forward to having him back."

Andrea Pizzitola (#24 Algarve Pro Racing Ligier JSP2): “I feel really good. The car was great in dry conditions so for me it was purely about not making any mistakes on a day when it was all too easy to lose a lot of time by running deep on the brakes or spinning. I pushed really hard and it worked, so I’m delighted."