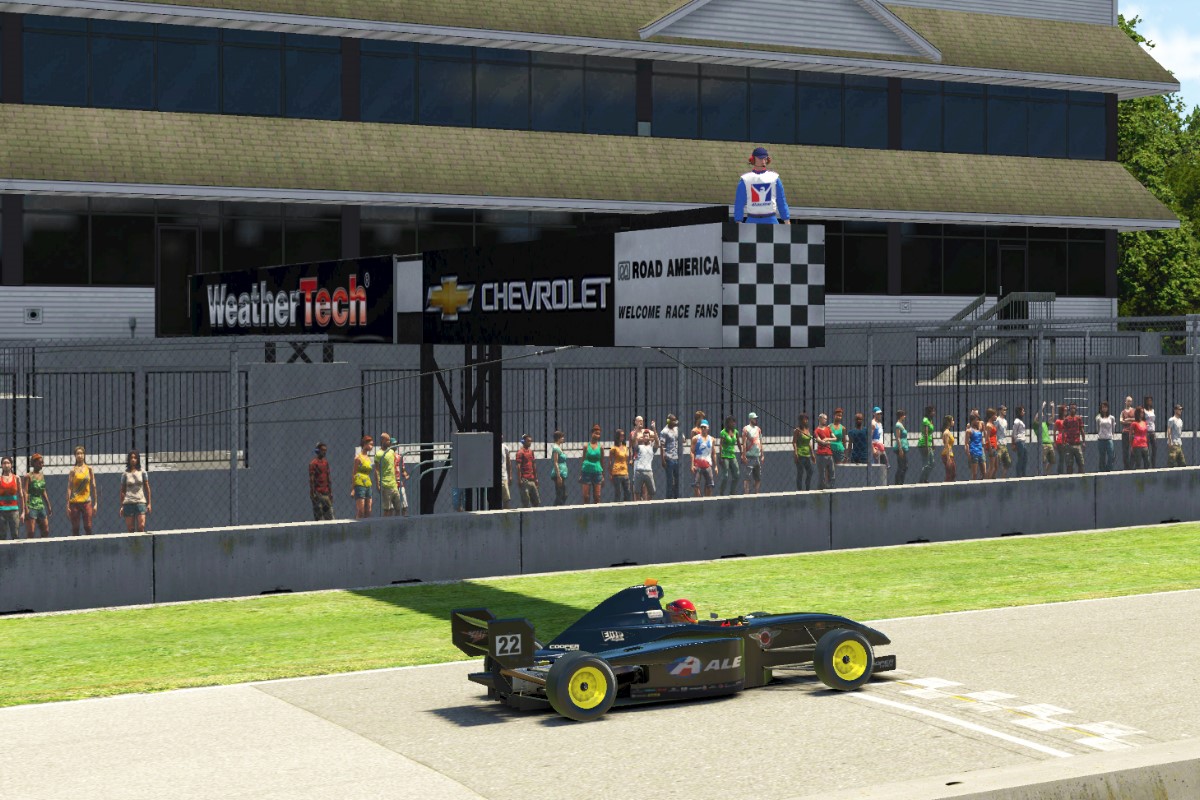 Eduardo Barrichello had been knocking on the door to Victory Lane in each of the first three rounds of the Ricmotech Road to Indy Presented by Cooper Tires iRacing eSeries. Fittingly today at his Cooper Tires USF2000 Championship team Pabst Racing’s home track, Road America in Elkhart Lake, Wis., the personable 18-year-old son of former Ferrari Formula 1 racer Rubens Barrichello drove a perfect race to take his breakthrough Road to Indy win in either the real or virtual world. It was entirely well deserved.

Singapore’s Danial Frost, who this year will contest the Indy Lights Presented by Cooper Tires series for Andretti Autosport, scored his first virtual Road to Indy podium finish in second, edging out series leader Phillippe Denes, from Carmel, Calif., at the finish line by just three-tenths of a second.

Denes, representing his Indy Pro 2000 Championship Presented by Cooper Tires team RP Motorsport USA, led most laps, eight, during a dramatic 45-minute, 22-lap race. But Denes was left to rue a strategic error which has allowed Barrichello to close to within 19 points, 119-100, with just one race left next weekend at the Mid-Ohio Sports Car Course.

A field of 35 contenders took part in the official qualifying session with only the fastest 28 able to progress into the race.

Last year’s USF2000 champion, Braden Eves (Exclusive Autosport), earned the SimMetric Driver Performance Labs Pole Award with a lap of 2:01.707. Looking to bounce back from a heartbreaking loss to Denes one week ago at the virtual Indianapolis Grand Prix Road Course, Eves, from New Albany, Ohio, made an exemplary start to lead away at the rolling start. He was chased by Denes, Ireland’s Peter Dempsey (Turn 3 Motorsport) and Australian-based New Zealander Hunter McElrea, making his eSeries debut for Pabst Racing.

Denes drafted past to lead the opening lap before Turn 3 Motorsport team principal and former Indy Lights race winner Dempsey took advantage of a massive slipstream to leapfrog into the lead at Turn One. Sadly, it didn’t last for long. McElrea, who one year ago claimed his first Road to Indy win in the real world at Road America, elevated himself to second place as the field plunged downhill toward Turn Three, but his attempt to draw alongside Dempsey at the apex of the corner resulted in contact which sent both of them spinning off the road. Several other drivers, including the unfortunate Eves, also were unable to avoid the incident.

Denes emerged in the lead unscathed, chased by Legacy Autosport’s Andre Castro, from New York, N.Y., up from sixth on the grid, eSeries debutant and regular Indy Lights campaigner Ryan Norman (Andretti Autosport), from Aurora, Ohio, and Barrichello, who had qualified seventh.

The top three remained in tight formation until Lap Six, when Denes made a mistake and ran off the road at the exit of Turn 14. The Californian managed to regain control but not before he was already committed to entering the pit lane.

With one mandatory pit stop for a virtual fuel top-up necessary, Denes was able to cycle back into the lead after the other leaders made their own stops at around half-distance. But Denes’ early stop meant that he would need to make an additional stop before the finish. When he ducked back onto pit lane after 16 laps, Denes fell to fourth, directly behind Frost, who had driven an excellent, consistent race after starting a lowly 21st.

Barrichello had caught the other leaders when Denes made his initial stop, and moved to the front for the first time after 10 laps when Norman ducked into the pits. Barrichello then made his own stop one lap later, right at the half-distance mark, resuming in fourth.

But when the three cars ahead of him – Denes, Castro and a recovered Eves – all needed to make an additional “fuel" stop, Barrichello hit the front again on Lap 20. He then stroked home to take the flag 18.533 seconds clear of the rest. Barrichello also claimed an additional championship point for posting the TSOLadder.com Fastest Lap of the Race.

USF2000 driver Christian Brooks (Exclusive Autosport), from Santa Clarita, Calif., looked set for second place after another fine drive, but having made his pit stop one lap sooner than Barrichello turned out to be his undoing. Despite doing his best to preserve fuel, Brooks ran dry on the final lap. He was fortunate to make the final uphill run to the finish in ninth, after being pushed across the line by Jacob Loomis (BNRacing), from Corinth, Texas, who gets the nod for the sportsmanship award.

Brooks’ dramas ensured that the battle between Denes and Frost was now for second place, whereupon Frost timed his run to perfection to pip Denes by a scant 0.309-second.

The final round of the five-race Ricmotech Road to Indy Presented by Cooper Tires iRacing eSeries will visit the virtual reality of Mid-Ohio Sports Car Course next Saturday, April 25, at 1:00 p.m. EDT.

Eduardo “Dudu" Barrichello (#22 Ale-Pabst Racing iRacing Pro Mazda): “That was a very, very crazy race! I did not expect to come first but our strategy really worked. I saved the car, the fuel, the tires, everything for the end. I was kind of lost early, sitting in P4. I think I had some damage from the incident with (Hunter) McElrea. When I saw Denes pit I thought that would be the win. I can’t thank my Pabst Racing teammates enough, they were all helping to calculate fuel – Yuven (Sundaramoorthy) was our race engineer, even though he was racing! Colin (Kaminsky) and Hunter helped me a lot as well. I can’t thank them enough. Phil Denes is always fast, but I’ll be practicing a lot for next weekend."

Danial Frost (#68 DEN-JET-Andretti Autosport iRacing Pro Mazda): “We started a bit down in the order, so I knew we had some making up to do. I just put my head down and tried to stay away from all the crashes – with 28 cars on track, there was no way not to have crashes. We had a good strategy on fuel and, with some luck, finished second. I’m happy with that and will work for more pace next week. I haven’t done as much sim racing as the top guys so I’m practicing more now, but it’s great to be able to do that. There still is the feeling of adrenalin even in the sim – it’s not the real thing, but it’s the closest thing we have right now and it’s great to get some hours in racing against the other drivers."

Phillippe Denes (#5 Fire Flighters-RP Motorsport USA iRacing Pro Mazda): “That corner (Turn 14) is so tricky: if you drop a wheel, it’s chaos. The car snapped on me and I saved it, so I came into pit lane. We didn’t realize that the fuel calculations wouldn’t let us fill up the fuel with the amount we wanted, so we had to pit again. I made a little mistake on the last lap that let Frost by, but I’m happy to get third, to stay on the podium and salvage as many points as possible. I like Mid-Ohio, so I think next week will be fun. The competition is getting stiffer every race, so I’ll stay clean and work hard