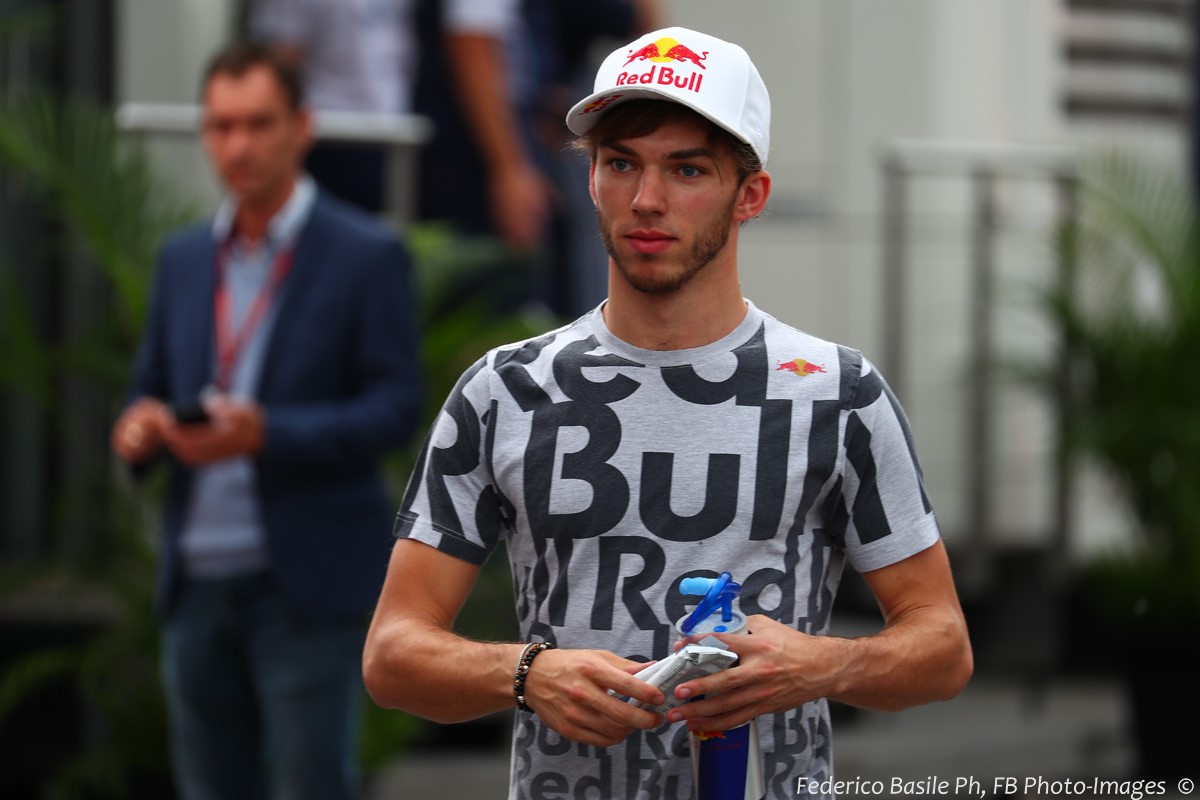 UPDATE This rumor is now 'fact' as Gasly will indeed replace Ricciardo at Red Bull. It was confirmed by the team today.

Our 2019 F1 Silly Season Page has been updated accordingly.

Aston Martin Red Bull Racing is delighted to announce that Pierre Gasly will join the Team from the beginning of the 2019 season, to race alongside Max Verstappen.

Pierre who had his first competitive taste of Formula One last year, joining our sister team Scuderia Toro Rosso from the 2017 Malaysian Grand Prix, has had an impressive first full season in the sport this year, notably driving superbly to finish fourth at the Bahrain Grand Prix and notching two further top ten finishes in the first half of the season.

Pierre’s career in motorsport has gone from strength to strength. Following a start in karting he competed in the French F4 Championship in 2011 before graduating to Formula Renault 2.0, winning that title in 2013. Now as part of the Red Bull Junior Program he moved to the 3.5 Renault series racing for Arden Motorsport before stepping up to GP2 in 2015 and becoming Red Bull Racing’s reserve driver. He won the 2016 GP2 Drivers’ Championship at the end of a thrilling season racing for the Prema Powerteam. In 2017 he competed in Japan’s Super Formula Championship, finishing runner-up while having already begun his F1 career, racing at Scuderia Toro Rosso.

Christian Horner, Team Principal said: “Since Pierre first stepped into a Formula One seat with Scuderia Toro Rosso less than a year ago he has proved the undoubted talent that Red Bull has nurtured since his early career. His stellar performances this year at the Honda-powered team, in only his first full season in Formula One, have only enhanced his reputation as one of the most exciting young drivers in motorsport and we look forward to Pierre bringing his speed, skill and attitude to the team in 2019. While our immediate focus remains fully on achieving our best result in the 2018 World Championship, we look forward to competing in 2019 with Max and Pierre at the wheel of Aston Martin Red Bull Racing."

Pierre Gasly commented: “To be awarded a drive at Aston Martin Red Bull Racing from 2019 is a dream come true for me, I’m so excited to be joining this top team. It has been my goal to race for this team since I joined the Red Bull Junior Driver Programme in 2013, and this incredible opportunity is another step forward in my ambition to win Grands Prix and compete for World Championships. Red Bull has always looked to fight for championships or victories and that’s what I want. I’m a really competitive guy and when I do something it’s always to fight for the best and top positions.

“As hugely exciting a moment as this is, I am fully aware of the challenge this special opportunity offers me and the expectations that faces any driver at Aston Martin Red Bull Racing. I’m looking forward to rewarding the faith that Dietrich Mateschitz, Christian Horner and Dr Helmut Marko have placed in me. The first phase of that is to keep pushing for ultimate performance and the best results in 2018 that I can achieve for my team, Scuderia Toro Rosso. I wish to thank Franz Tost and everyone at Toro Rosso and the factory in Faenza for giving me the golden opportunity of a drive in Formula One and their amazing commitment and support, which I know will continue for the rest of this season. My focus now is to do everything I can to give them a season to celebrate.

08/16/18 McLaren Racing today confirmed that Carlos Sainz Jr. will race for the team in Formula 1 from the 2019 FIA Formula One World Championship. The Gasly to Red Bull announcement is coming soon we expect.

Carlos, 23, from Madrid, Spain, has signed a multi-year deal with the team, replacing Fernando Alonso. Carlos will enter his fifth season of Formula 1 when he joins the team as a McLaren driver in 2019. He currently sits 11th in the drivers’ championship standings with 30 points.

Part of a legendary racing dynasty, in his early racing career Carlos won the Formula Renault 2.0 NEC championship and came runner-up in Eurocup Formula Renault 2.0, both in 2011. He made his debut in Formula 1 at the start of the 2015 season as reigning Formula Renault 3.5 series champion, with seven poles and seven wins.

“We’re incredibly excited to have Carlos join us as a McLaren driver. We’ve been assessing him for some time now and rate him very highly among the next generation of young talent emerging through the ranks in Formula 1.

“Carlos brings with him the perfect blend of youth and experience. Although he’s just 23, he’ll be starting his fifth season in the sport with us and will bring with him a huge amount of racing experience, both in Formula 1 and with our partner Renault.

“It’s no secret that Carlos is a huge admirer of Fernando’s, and it’s fitting that he will be stepping into his seat as a Spaniard with a legendary name in motorsport. We think he’ll be a great fit for McLaren and we’re really excited to have him join us from next season and beyond."

“I’m delighted to finally be able to confirm that I’ll be a McLaren driver from the 2019 season. It’s something I’ve been looking at for a while and I’m very excited about this next chapter in my career.

“I’ve been a McLaren fan for as long as I can remember. It’s a great name in the sport with an incredible heritage, and the list of drivers that have raced for McLaren over the years are among the heroes of Formula 1.

“Fernando is of course one of them, so it’s particularly special that I’ll be taking his seat as part of the next generation of Spanish racing drivers behind the wheel of a McLaren.

“Finally, I’d like to thank everyone at McLaren for giving me this opportunity to fulfil a childhood dream. The team has a long-term plan for the future and I’m very much looking forward to playing a key role in its journey back to success."

McLaren will communicate its full driver line-up for the 2019 season in due course. Waiting on Gasly announcement at Red Bull.

That is the claim of multiple authoritative media outlets, all citing 'sources'.

Spain's El Mundo Deportivo said the 23-year-old is currently holidaying in Mallorca, but confirmation of his switch from Renault will come "in the coming days".

"It could be this week but certainly before Spa," the newspaper claims, citing information direct from the Sainz camp.

It is believed either Stoffel Vandoorne or young McLaren junior Lando Norris will be Sainz's teammate.

With Sainz heading to McLaren, Pierre Gasly is the big favorite to replace Daniel Ricciardo at Red Bull.

08/15/18 McLaren will announce Carlos Sainz Jr. as Fernando Alonso's replacement later this week, ESPN is rumoring, opening the door for Pierre Gasly to step up to Red Bull next year.

On Tuesday McLaren confirmed Alonso will not continue in F1 beyond 2018, ending months of speculation about his future. McLaren had been making contingency plans for Alonso's departure and was in talks with Sainz and Daniel Ricciardo about a 2019 seat.

The Ricciardo talks were unsuccessful — earlier this month the Australian announced his shock move to Renault for next year, taking Sainz's place as Nico Hulkenberg's teammate in the process. Sainz had been at Renault this year on loan from Red Bull having been unable to secure a step up to the senior team from Toro Rosso.

Ricciardo's imminent departure meant Sainz and Gasly were the favorites to fill the void. Sources have told ESPN Sainz will be confirmed on a two-year deal at McLaren on Thursday, meaning Toro Rosso's Gasly looks set to be the man to make the jump and partner Max Verstappen in 2019.

The identity of Sainz's 2019 teammate remains unclear. If the out-of-form Stoffel Vandoorne is dropped by the team, junior driver Lando Norris would be a candidate. In the hours after the Alonso news, Norris tweeted a gif with the word: "Interesting". Nate Saunders/ESPN

We have updated our 2019 F1 Silly Season page accordingly.