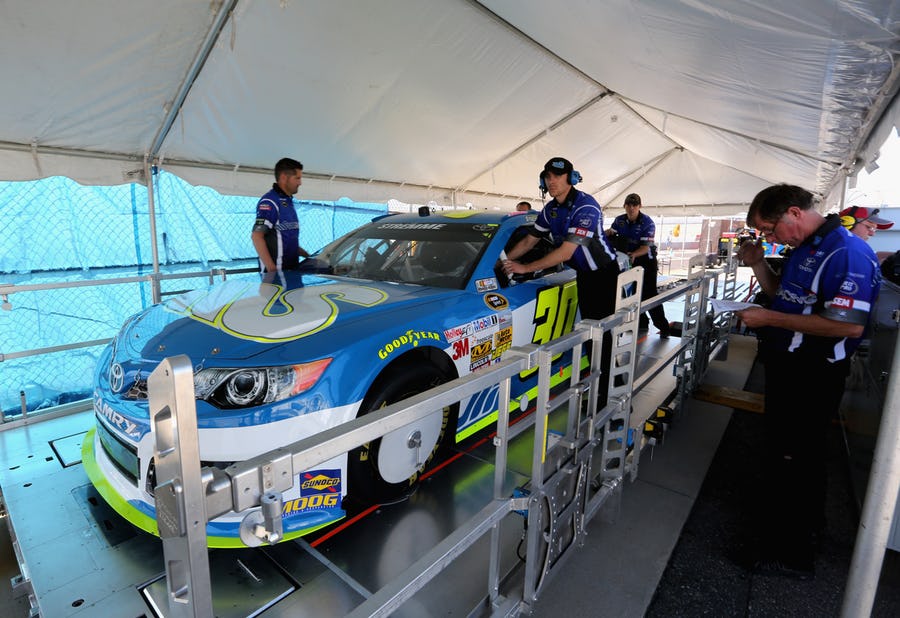 SPARTA, Ky. – NASCAR has had to stay ahead of teams and continues to update its software algorithm for the Optical Scanning Station (OSS) after teams claim they found a way to "confuse" it with contrasting dark and light colors along the wheel wells and edges of the right rear of the racecar, multiple sources confirmed to Kickin' the Tires.

This is the first season for NASCAR's at-track OSS, where cars are rolled into a dark tented room and then illuminated with thousands of laser lights that take measurements of all angles of the car. According to NASCAR there are more than 130,000 points of measurement from eight laser projectors that are captured by 17 cameras – 16 around the car and one that is placed underneath the car. At the end of the scan, NASCAR is given a virtual 3D rendering of the surface of the car. There are two types of scans – a high-resolution and a low-resolution.

Teams with all black or extremely dark-colored racecars are given a high-res scan. Teams with light colored racecars usually get low resolution scans because they do not take as long as the high-res scans. Now, it appears that over the past couple of weeks, some teams have figured out that changing the paint scheme and incorporating a dark color – most-commonly black – around the rear fender wells, along the bottom edge of the car and/or up the rear bumper cover tricks the OSS into thinking the car is narrower than its actual measurements.

One crew chief, who spoke with Kickin' the Tires strictly on a confidential basis, said teams are not cheating but they learned that contrasting colors affect the average measurements used to determine if the bodies of the racecars are within the NASCAR's specifications. The goal, he said, is to get more of the rear of the car into the air to help with downforce at tracks like Kentucky Speedway, which coincidentally is where some teams used the altered paint schemes for the first time.

NASCAR's official comment to Kickin' the Tires was, "NASCAR is fully confident in the ability of the Optical Scanning Station to help provide a level playing field for the garage. We continually update the software to stay ahead of any possible challenges."

In addition, John Probst, NASCAR's Vice President, Innovation and Racing Development, went into great detail and explained that neither he, nor his team, believe the OSS has been exploited. He said he reviewed data from the OSS at Kentucky and compared cares with the darkened or blacked-out areas against the scans of those without and he could not tell a "appreciable" difference in the scanning points. As for the software upgrades, the most recent was done at Sonoma Raceway, he said.

See more at Kickin' the Tires.