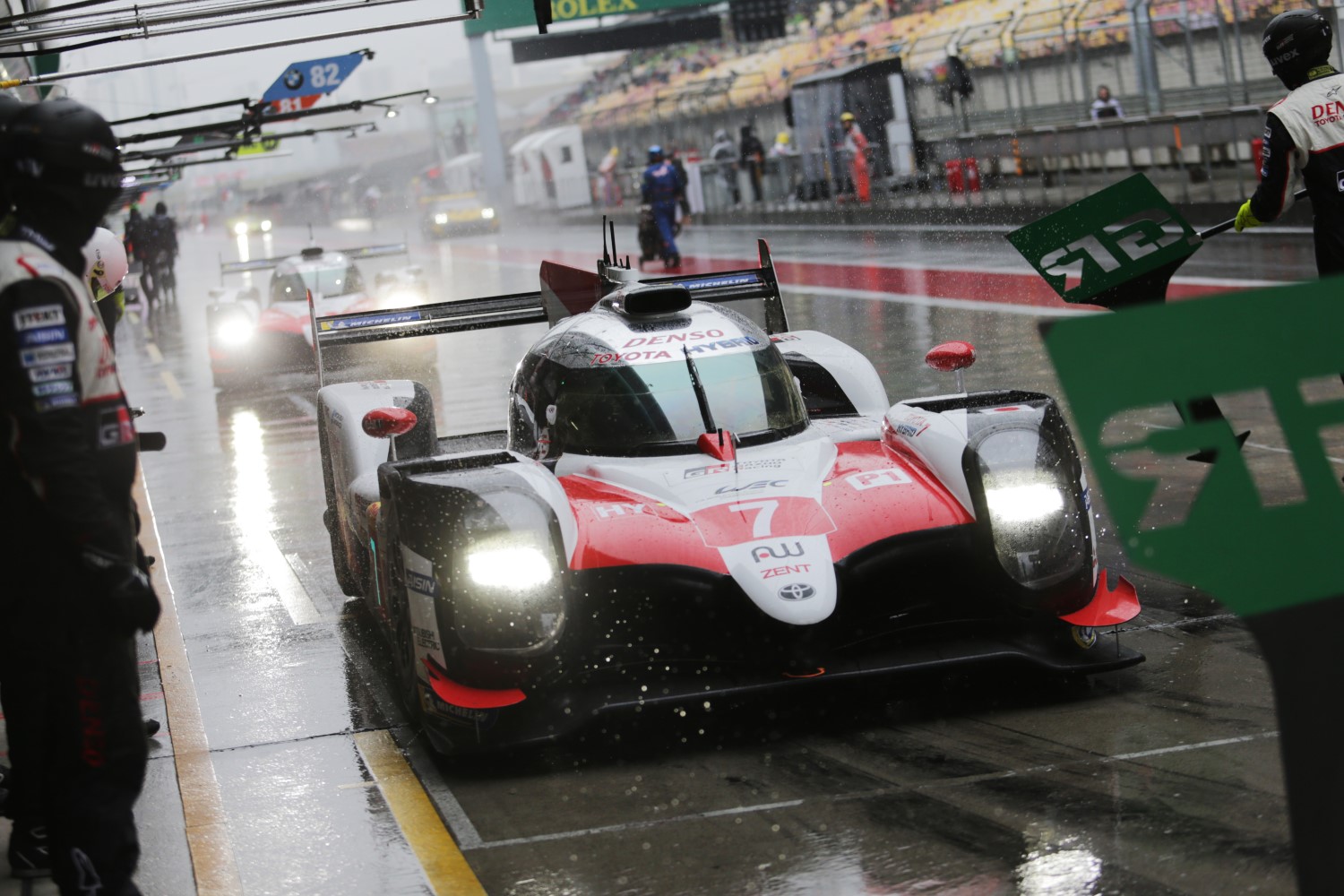 The No.8 Toyota driven by Fernando Alonso, Kazuki Nakajima and Sebastien Buemi was 1.419 seconds behind at the finish after losing time midway through the race under a Safety Car. Rounding out the podium, for the first time this year, was the No.11 SMP Racing BR1-AER of Jenson Button, Vitaly Petrov and Mikhail Aleshin after Petrov held off a late threat from Andre Lotterer in the best of the Rebellion R13 Gibsons.

The caution period cost Fernando Alonso approximately 25-seconds and allowed Kobayashi to build what turned out to be a race defining lead.

Completing the podium and registering the first overall visit to the podium for a Russian entered team was SMP Racing.

The No.11 crew of Jenson Button, Vitaly Petrov and Mikhail Aleshin fought off the No.1 Rebellion Racing crew of Andre Lotterer, Neel Jani and Bruno Senna during a race long battle.

[adinserter name="GOOGLE AD"]Button celebrated his first ever WEC podium to make it two celebrations in as many weeks after he took the Super GT title in Japan last weekend.

The LMP1 privateers had their most competitive weekend of the Super Season so far after EoT modifications were completed ahead of the Shanghai event.

Morning rain forced a safety car start due to treacherous track conditions but even driving at reduced speed proved risky and soon an accident further down the field prompted a red flag, with the pole position #7 TS050 HYBRID leading from the #8 car.

A minor improvement in conditions allowed a short green flag period around 70 minutes after the start and during this Jose ran slightly wide in the #7 which allowed Buemi to claim the lead for the #8, prior to another safety car and red flag sequence.

Soon after the two-hour mark, the race re-started behind the safety car again. The TS050 HYBRID required a refuelling stop on lap 27, during which Nakajima took over the #7 and Alonso got behind the wheel of the #8, both temporarily towards the back of the field until other cars too made their pit stops.

When the running order stabilized around half distance, Alonso was second with Nakajima, delayed due to time lost in a congested pit lane, fourth. Alonso battled through GT cars to overtake the #1 Rebellion for the lead, while Nakajima was similarly spectacular in passing Jenson Button’s #11 SMP for second.

The next safety car, for a damaged LMP1 on the start-finish straight, came with just over two hours remaining. Nakajima had to make a fuel stop on lap 55 and the team focused on keeping the race lead for as long as possible considering the successive safety car and red flag periods, bringing Alonso in for his fuel stop a lap later. That additional lap cost more time than expected due to a combination of factors and Alonso briefly dropped to third before overtaking the #11 SMP.

Track conditions slowly improved and the TS050 HYBRIDs stretched their advantage at the front. The final driver change with around 70 minutes remaining saw Mike take over the leading #7 with Nakajima in the #8 pushing hard to close the gap, setting the fastest lap of the race in the process.

The weather took a turn for the worse in the final 30 minutes, with steady rain, but despite another safety car closing up the field, Mike Conway held on to win by 1.419 seconds.

Claiming their second victory of the season, the trio survived several technical and on-track scares to take the maximum points and displace the Signatech Alpine Matmut crew at the top of the points table.

Contending with a gear issue and also an off-track excursion for Aubry in the final hour of the race, all three headed off the opposition to send their local fans home ecstatic at an accomplished performance.

Taking their best result of the Super Season so far, Pastor Maldonado, Anthony Davidson and Roberto Gonzalez took second position after leading in the initial green flag running early in the race.

Aston Martin took a first win in LMGTE Pro for the new new-generation Vantage GTE as Nicki Thiim and Marco Sorensen triumphed after a tense battle throughout the race with Porsche and BMW.

Aston Martin looked like they were heading toward a 1-2 but the Porsches closed in on Maxime Martin in the No. 97 Vantage during the final two stints, before getting past.

AF Corse Ferrari’s No.51 of James Calado and Alessandro Pier Guidi came through after a difficult weekend to finish 5th in class ahead of the sister No.71 car. Ford Chip Ganassi Racing had a less successful weekend in Shanghai than in the past, while BMW was on this occasion not able to repeat its Fuji podium (on its first wet tire run ever), both teams being awarded post-race penalties for differing infringements.

It was a Porsche 1-2-3 in LMGTE Am as the No.77 Dempsey Proton Racing Porsche 911 RSR of Christian Ried, Julien Andlauer and Matt Campbell claimed top honors in the 6 Hours of Shanghai today, closing out a difficult week for the German team in a positive way.

Despite the climatic conditions over the weekend, 45,000 enthusiastic Chinese fans supported the WEC’s annual visit to Shanghai. All 20 of the GTE entries finished the race, surviving extremely difficult driving conditions to put on a great show.

The 2018-19 WEC season resumes after a long winter break with the 1,000 Miles of Sebring in Florida on 15 March, prior to a race at Spa and the season-finale at Le Mans in June.

Hisatake Murata, Team President: “This race was the start of the second half of this season so I am pleased to have another one-two victory, especially in such weather. We got the one-two finish we were aiming for but we found some things which can be improved in the future, when such situations occur again. Finally, I want to give my big congratulations to our friends at TOYOTA GAZOO Racing WRT on winning the World Rally Championship today; it’s a fantastic achievement in just the second season back."

Mike Conway (TS050 HYBRID #7): “It was not an easy race for me in those conditions; visibility was very difficult when it started raining at the end and the tires were not up to temperature. I’m really happy with the result so big congratulations to the whole team, and thanks to my car crew and team-mates for another solid job. It’s great to win and continue the momentum from Fuji, especially as it’s the last race of the year. Now we will keep pushing over the winter so we can finish the season strongly."

Kamui Kobayashi (TS050 HYBRID #7): “The team did a great job and Mike and Jose did well; I’m really pleased to win again. My stint was a hard one because I came out behind the safety car and there were many other cars from other categories around me in heavy rain with very little visibility. I concentrated on minimizing risk and overtaking cleanly, with the belief that the safety car would need to come out again. When it did and we were leading, I just focused on keeping a gap."

Jose MarÃ­a LÂ¢pez (TS050 HYBRID #7): “The team did a fantastic job today in very tricky conditions so thanks a lot to them. It is fantastic to have achieved the win today. From my side it was a short but really hard race. There was a lot of water on the track at the start and, as the first car, I had the advantage of better visibility but I was also the first to reach each of the rivers across the circuit. Fortunately I kept the car on track despite a small mistake at the hairpin."

Sebastien Buemi (TS050 HYBRID #8): “I did the first stint when the conditions were very difficult but our car was strong even in these very wet conditions. Personally I am happy with my driving as I could take the lead from the sister car. I think we had a very quick car and the speed for the victory but the #7 crew had a bit more luck with their pit stops so the final result is a bit disappointing."

Kazuki Nakajima (TS050 HYBRID #8): “It was a difficult race in difficult conditions. We had a good car but we had bad luck with our pit stop during the safety car. I think we were unlucky for the second race in a row and I hope the luck will come back to us in the future. The year is over but the WEC season still has three races remaining and we will push to get back into the middle of the podium."

Fernando Alonso (TS050 HYBRID #8): “It was a tough race due to the weather conditions, the amount of water on the track and the safety car periods. Wet weather races are always very stressful, also in terms of visibility. I think we had a good, fast car and did the best we could; we were quite competitive today and could fight for the win. In the end it did not work out but we will try it again next time."