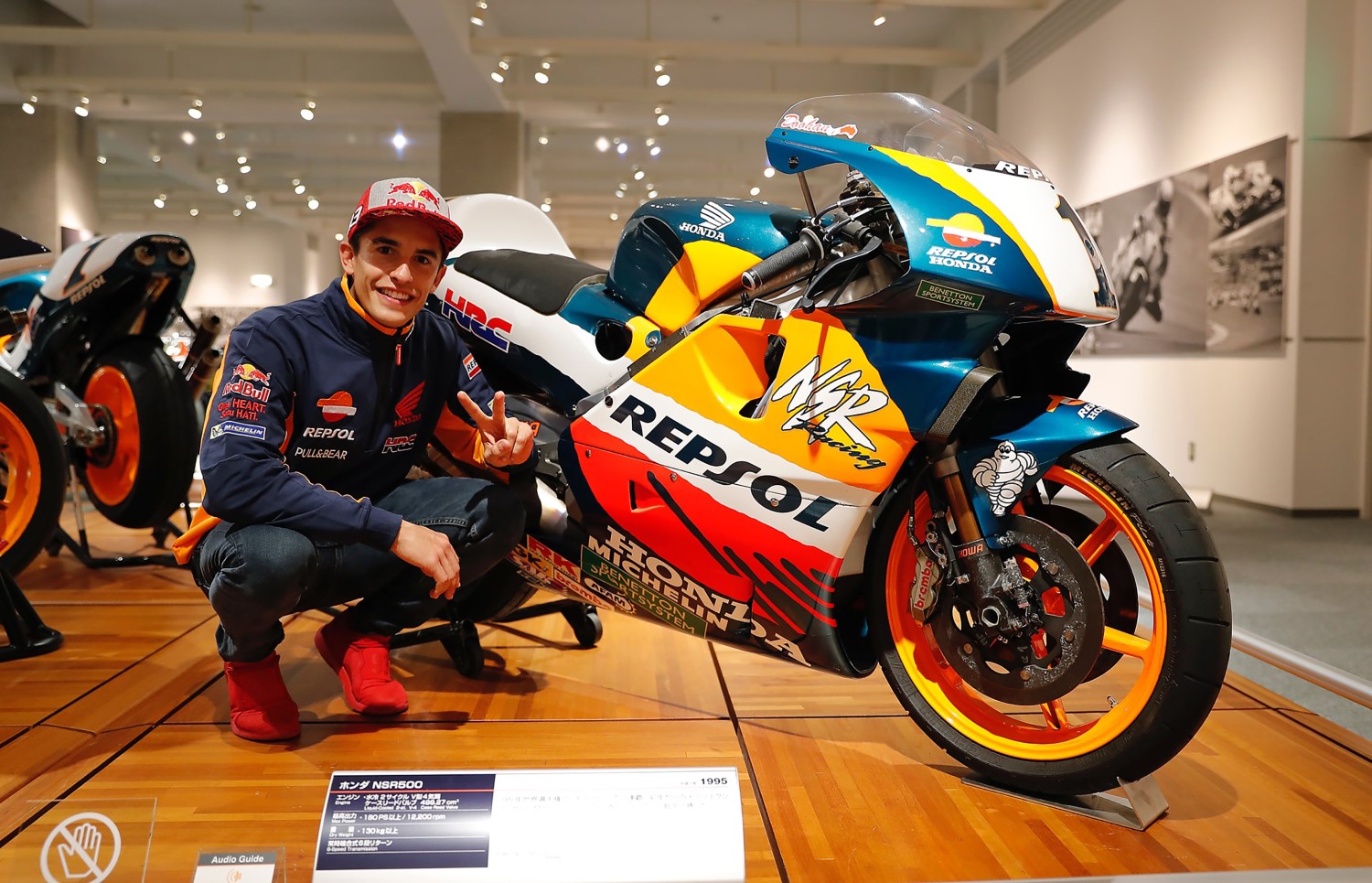 “Marc would not have had any problems with a 500cc bike, because great riders like him are able to adapt to any machinery"

Mick Doohan was as popular as ever at last weekend’s Australian Grand Prix, where Marc Marquez honored him by wearing tribute boots and gloves.

Winning the World Championship in Japan allowed Marc Marquez to move level in premier class titles with one of the legends of motorcycle racing, Mick Doohan. Both have five premier class crowns with Repsol Honda team.

Did you give many interviews during the Australian Grand Prix?

“I always do at Phillip Island, especially this year with the fifth title for Marc [Marquez]; everyone wants to make the comparison between his titles and mine, because of the number. We’ve both won five titles, all with Repsol and all with Honda; There are many similarities. Mine were won many years ago, but it’s nice to be remembered in this way, even if it means a lot of interview requests in addition to other commitments that I already have. I’m very happy to be able to do everything. It’s not a bother for me, and it’s simply a matter of finding the time and way to do everything."

What did you think when you saw that Marc was going to wear your boots and gloves?

“It was fantastic. He actually asked me for permission to use them, and of course I said that he could. It’s an honor that he thought of me like that for the race in Australia."

[adinserter name="GOOGLE AD"]What does it mean for you to see Marc win five titles with Honda, like you did?

“I think it’s fantastic. It’s good for the sport and it’s good for the factory. Working for Honda was fantastic for me. They gave me a platform that allowed me to win. I didn’t need any extra motivation to continue riding year after year, as long as they guaranteed me their commitment to continue testing the bike, improving it and bringing me what I wanted. If I had needed a motivation to change the color of my bike, maybe it would have been time to retire. Not everyone will like that, but it’s how I was and I think it’s good for both parties to have a solid association with a single manufacturer."

What’s more impressive about Marc? His titles or the way he rides?

“I think the two things go hand in hand. His riding is impressive, there is no doubt about that; he makes it exciting for everyone watching, including me. But if he didn’t ride like that, he wouldn’t have won those titles. At the same time, it’s what gets the fans glued to the television. This year we have seen a great season of racing, with many riders at the front and a lot of fighting for wins, which has given us races like Assen. I always try to watch the races, including qualifying, and luckily I can follow it wherever I am -even on my mobile phone. There has been a lot of excitement and MÃ¡rquez has been part of that. He’s an attraction to get you watching MotoGP to see what will happen, because you don’t know what will happen right until the last corner."

What is the best quality that Marc possesses?

“I think his determination. His commitment to never give up, his will to compete. Some say he is too aggressive, but every rider is. When you are always on the limit, sometimes there is not much room for error and unfortunately there will be contact. There has always been contact, elbows, and moves that are a little aggressive. But before now, not everything was recorded by the television cameras. Now it’s like a football game; you can’t do anything. If you aren’t aggressive, you won’t win. It seems that Marc has a determination and a desire to win that is greater than that of the others riders."

“I’m sure he would have had no problem on a 500cc bike. The great riders like him, which we saw with Valentino and others, are able to adapt to the bike that they have. That was already the case in my time; there were riders who changed manufacturers, but their results were the same. The rider, the organic part of the bike, is the thing that usually makes the biggest difference. Marc could win for practically all of the factories."

Do you see yourself reflected in any of the things that Marc does?

“I would be crazy if I said that! No, these are different times and the only thing that we could say is similar would be the will to win and to never to give up. I think that Marc and other riders, like Valentino, go into the race wanting to win no matter where they qualify. It’s the only similarity you can find between someone like me and Marc. I never went into a race thinking “I hope I can finish second." The aim was always to win, and if that was not possible, then the next best position, but I was always thinking about winning.

“Marc is only 25 years old and, if he doesn’t get injured and maintains the desire to ride, he could win two, three, four or five more World Championships."

Can you imagine competing against him?

“Yes, but if he were competing in my time, he would think ‘Who is Mick Doohan? Just a rider against whom I compete,’ just as he treats the rest of the riders today. It’s the same with me. When you go out there to compete and to win, the mentality is the same. Even though my time was 20 years before his, just as Agostini came before me and I would get asked about him."

You rode against Alberto Puig. How do you see his role as Team Manager for Repsol Honda ?

“Alberto is a rider, and that’s what you need in a team. You need someone intelligent, with a good knowledge of the competition, even if he isn’t a rider. I remember that when I competed, he was a fast rider, strong and determined, but he was always very calculating. We have seen him working with young riders for many years, like Dani Pedrosa, and I think he has brought that experience to the team in what is a great step forward. Now he will have to handle MÃ¡rquez and Lorenzo, and I think he will do well because he knows what each one will be asking for. At least they will not have the language barrier, as happened with me."

Marc is still only 25 years old. What can we expect from him in the future?

“That depends on him. He is only 25 years old and if, touch wood, he doesn’t get injured, stays fit, strong and healthy, and maintains the desire to ride, then even if he retires at 30 he could win two, three, four or five more World Championships. Statistics are something you don’t think about while competing, although it is important to the media. If everything continues as it has done throughout his career, then if he competes he will do so to win. So if he competes for another five years, he could potentially win another five titles. But if he continues until the age of 35, then who knows?"

What do you think about MotoGP now, with the same tyres, electronics, etc?

“I think it’s fantastic. I think Dorna have done a great job, especially Carmelo Ezpeleta. I love talking to him, because he’s always one step ahead with his vision. I think he has managed the sport very well; If you look at the fans that come to the circuits and the television audiences, it is working out very well. The good riders would be able to ride without any electronics, but they have managed to make the crashes happen through losing grip on the front end, by forcing the limit of the tyre, instead of highsides when opening the throttle. It is safer and at the same time, with the same electronics, it is easier for everyone to manage the power."

Do you think your son will get to Formula 1?

“He’s like a 15 year old rider in the Spanish Championship who wants to get to MotoGP. I think you need to have a dream. He’s winning races and he’s fast, but he’s only 15. I guess I’m the one who has been putting some ideas that he has into his head and he has the same mentality of never giving up. He is not happy when he finishes second, but I think that comes from him. There is a bit of that and he gets angry when he doesn’t win, and he tries hard when it comes to training and motivating himself, but at the end of the day he’s only a 15-year-old kid."

What is it like to be the father of a driver?

“For me it’s nice, because I like motorsports. Being my son, you feel a bit of that adrenalin when he is on the track, but I try not to crowd him too much. Obviously you are a little worried about this or that, just like you see with Marc’s father and other paddock parents. He seems quite sensible and, hasn’t had many accidents for the moment. However, as happens in the Spanish Championship, the level rises exponentially and the competitiveness is much greater as you advance through the various series."