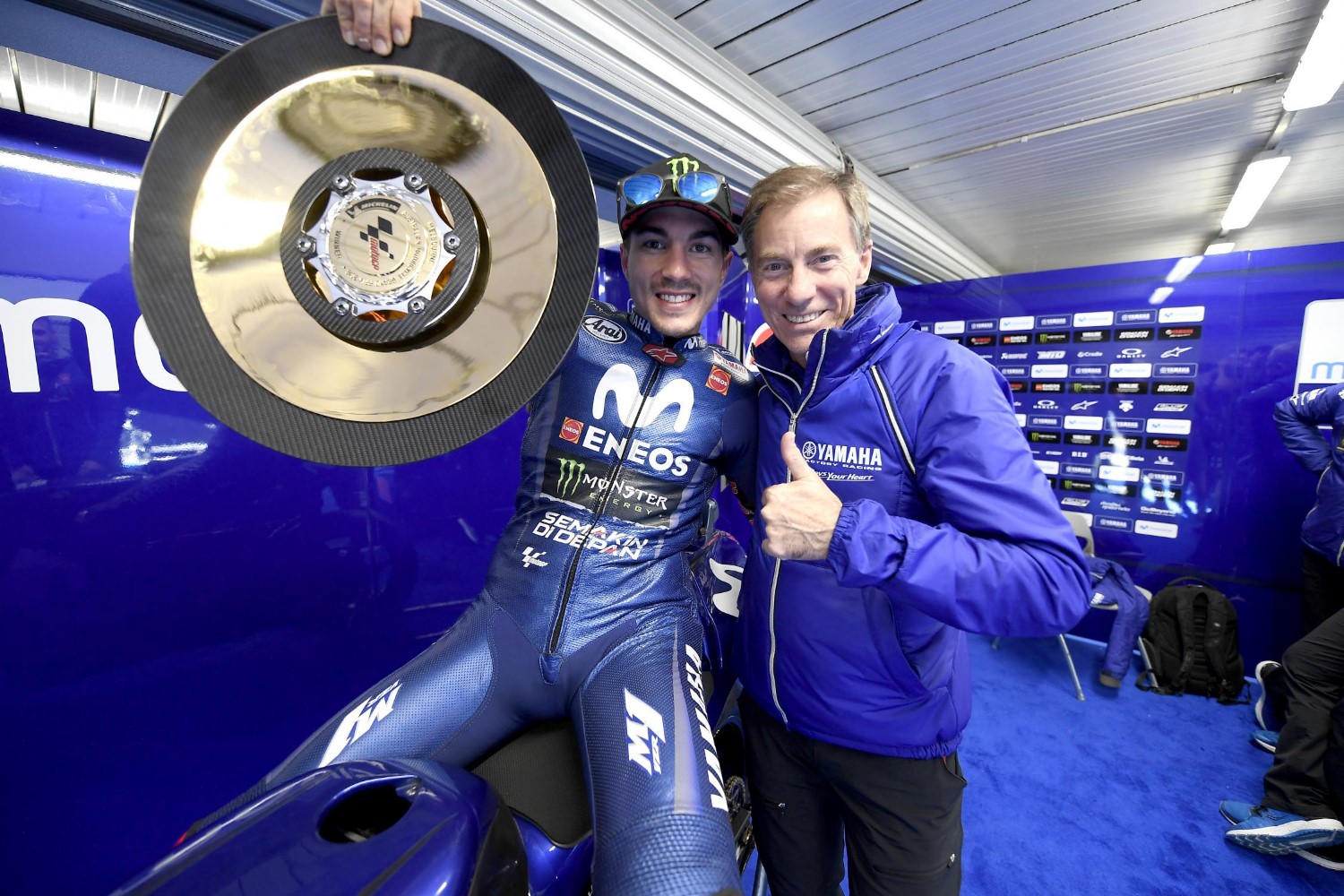 It took some luck that Marc Marquez would fall out, but that enabled Yamaha's Maverick Vinales to produce an exceptional ride to win the Australian MotoGP Grand Prix on Sunday.

Vinales was the strongest rider in the second half of the race and did enough to hold off Suzuki's Andrea Iannone to take Yamaha's first win for 25 races. Ducati's Andrea Dovizioso came home in third.

Recently crowned world champion Marc Marquez started on pole on Sunday but pulled out of the race after a high-speed incident with Johann Zarco. Vinales' Yamaha team-mate Valentino Rossi had to settle for sixth.

Following a frantic start, Jack Miller led the way at the end of the first lap, although Marquez remained in close proximity and was quick to restore his lead.

[adinserter name="GOOGLE AD"]However, just as the world champion appeared to be finding his groove, his chances were dashed after a crash with Zarco. The latter's front tire and Marquez's rear tire came into contact, prompting Zarco to be thrown from his bike. The Honda man somehow stayed upright but had to retire in the pits not long afterwards.

As the action continued, Vinales assumed control of the race, as he cut through the field to take the lead.

On Lap 6 he moved to the front and didn't look back, with the likes of Rossi, Iannone, Dovizioso and Alvaro Bautista all jostling for second place. It allowed Vinales to build a buffer of around four seconds to the rest of the field.

While Iannone and Dovizioso did emerge from that group to put pressure on Vinales late on, the battling they had done for second meant that life had been taken from their tires. As such, they were never seriously in a position to challenge for the victory.

In the end, the Yamaha man was able to hold off a fast-finishing Iannone with relative ease to clinch his first win since Le Mans in 2017. The triumph was a long time coming for Yamaha too.

The whole weekend at the 4,448m circuit had been shaped by strong, gusting winds and cold track temperatures, which caused all the riders and manufacturers difficulties in set-up and choosing the best compound of Michelin Power Slick tires for today’s race.

As the start drew close, four of the six available compounds were chosen, with just the hard front and medium rear not making the grid. Pole-setter and World Champion Marc Marquez (Repsol Honda Team) went with a medium front and rear hard slick, but it was Danilo Petrucci (Alma Pramac Racing) – soft front and hard rear – that got the holeshot and led into the first corner. After the first lap, local hero Jack Miller (Alma Pramac Racing) led the field over the line, before the race lead then changed hands several times over the ensuing laps.

Unfortunately, a collision between Marquez and Johann Zarco (Monster Yamaha Tech 3) saw the champion retire and the Frenchman crash out, but that didn’t stop the excitement as the riders pushed their tires to the limit on the cold surface, with their Michelin Power Slicks giving them the confidence to drive their machines through Phillip Island’s fast corners.

Vinales took the lead on lap-eight and he controlled the attack on his Yamaha – shod with a soft front compound tire and hard rear – to perfection as he never came under threat from the chasing pack. His victory sealed Yamaha’s first win in MotoGP since June last year and saw Movistar Yamaha MotoGP close the gap on the Repsol Honda Team at the top of the Team Championship.

The intense battle for the remaining podium positions saw a five-way conflict, which eventually led to Andrea Iannone (Team SUZUKI ECSTAR) taking second, with Andrea Dovizioso (Ducati Team) in third, both using a medium front and hard rear configuration. Fourth went to Alvaro Bautista (Ducati Team), who was riding for the Factory Ducati team as a substitute for the injured Jorge Lorenzo.

With high winds and cold track temperatures all weekend, along with a wet session on Friday, the Michelin Technicians had to work to the highest degree of their ability to get the optimum performance in the difficult and challenging conditions, Today’s race in-front of 36,600 fans at trackside demonstrated Michelin’s knowledge and understanding of the complexities of the conditions, the challenging Phillip Island circuit and the tires, all of which enabled them to give the best advice to all riders and teams, which facilitated towards the excitement at the MichelinÂ® Australian Motorcycle Grand Prix.

Michelin and the MotoGP paddock now return to Asia for the final leg of the three-week fly-away tour, as the Sepang International Circuit in Malaysia will play host to the penultimate round of the season on Sunday 4th November.

Maverick Vinales
"This is the best feeling ever, honestly! We've been in the dark all year, and suddenly we came into the light! I couldn't show my potential in the previous races, but today I could. Being first in Australia is always amazing! It's the best track ever, and I like to be at the front there. To win here and break this long none winning period of Yamaha is unbelievable! I was riding on the bike like I was in FP4. I got a really good feeling from the bike, so I knew I could maintain 1'29s. That's what I did for most of the middle of the race. I tried to escape as far as I could, because I knew my tire wasn't going to last until the end. I knew opening that gap would be difficult, I had some moments with some riders, and some shaking on the bike – I was struggling, but I still made it through anyway. It was amazing! I have to say 'thank you' to the team, because this weekend they worked for the win. We will try to be the best and we'll try to work in a good way. We don't want to lose the concentration, because we don't know what will happen in Malaysia, but for sure the level of motivation will be high after this weekend."

Marc Marquez
“At first I didn’t understand exactly what had happened, but I was angry because I felt the contact from the rear. I couldn’t continue the race because my seat was broken and moving around. It was impossible to ride. When I arrived in the garage and saw the video, I understood. It was just a race incident because at that point of the track, we arrive really fast, over 300 km/h. I was behind Jack Miller when I braked even a bit later than usual, and then I felt the impact. Zarco had taken the slipstreams from the two of us. You may think he could have considered that, but for me it’s just a race incident and I already spoke with him. What I can say is that today I feel really lucky, and the most important thing for me is that both me and Johann are okay. Today I was really focused, and the race was going as expected. I led for a couple of laps, and then I decided to stay in the group and wait a bit. I had the pace and I felt I was able to fight for the win. It’s unlucky that we got a zero here at Phillip Island, but if next year I can win the title in Japan again and have another DNF here, I’ll sign up for that! Now let’s focus on the next race."