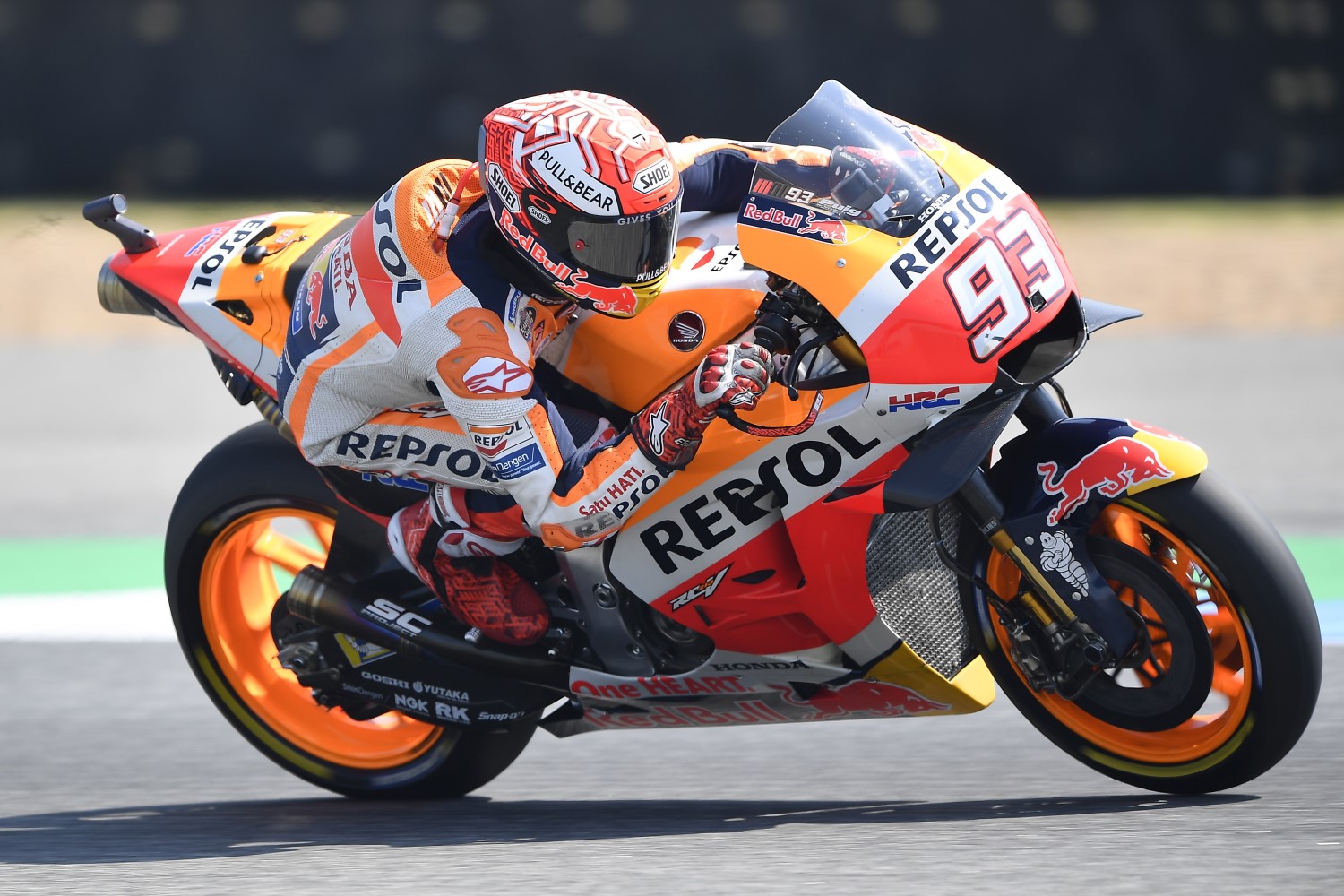 After a race long battle between the Honda and Ducati aces, Marc Marquez passed Andrea Dovizioso in turn 5 on the last lap to win the inaugural MotoGP race in Thailand by just 0.115s in a real thriller.

Dovizioso tried to beat Marquez off the final corner and win the drag to the line but it was not to be as Marquez took his 7th win of the year and extended his point lead is now up to 77.

It was a hat-track weekend for the Spaniard, who earned pole position, set the lap record and earned the victory.

Yamaha riders Vinales and Rossi were a close 3rd and 4th with just 1.5sec separating all four at the line.

It was Marquez who got the holeshot from pole as the lights went out, with Valentino Rossi (Movistar Yamaha MotoGP) tucked in behind his rival from P2 on the grid. Cal Crutchlow (LCR Honda Castrol) launched well from P5 to slot into third, before Dovizioso re-took P3 into Turn 3 as the front three in qualifying held station, spearheading the field into a high-speed game of chess at the Chang International Circuit.

[adinserter name="GOOGLE AD"]Everyone held position before Rossi got past Marquez on lap 4 on the run down to Turn 3, ‘The Doctor’ back up the sharp end and looking strong to control the pace. With tire life a major factor in the soaring Thailand temperatures, no one wanted to force their hand. That was until lap 11 when Rossi couldn’t get his M1 firing off the first corner, with the Ducati of Dovi and Honda of Marquez getting past the nine-time World Champion – the number 04 now the man in charge of controlling the 200mph freight train.

With lap times fluctuating and a front group of eight now packed together, Johann Zarco (Monster Yamaha Tech 3) the man to lead Dani Pedrosa (Repsol Honda Team) and Alex Rins (Team Suzuki Ecstar) up to the tailpipes of Vinales in fifth, it was only a matter of time before someone decided to pull the pin and with 11 laps to go, Dovizioso upped the pace. Marquez and Rossi tagged along, with fourth place Crutchlow slipping back down the order from P4 to P7.

However, the lap times then slowed again as Vinales bridged the gap to the leading trio, with Pedrosa then crashing at Turn 5 with eight laps remaining as he and Zarco got a whiff of a potential podium, the duo closing down the leaders by half a second on the previous lap. The race then entered a critical stage and it was Dovizioso and Marquez who started to fight it out for the lead, with Rossi starting to lose touch as teammate Vinales moved through to get a front-row seat of another Ducati vs Honda battle. With four to go, Marquez played his first hand, braking deep into Turn 3 in an attempted pass. But he ran wide to allow Dovi to slice back through.

This painted the picture for a barnstorming final three laps in Buriram. On the same lap, Marquez sliced his way through at Turn 8, but Dovi snapped straight back at Turn 9. It was déjÃ  vu a lap later as the Repsol Honda grabbed the lead into Turn 8, no way through for the Ducati this time at Turn 9, but a pass into Turn 12 was made to stick heading onto the last lap. The chosen corner for a Marquez assault was Turn 5 – a great move from the six-time World Champion with Dovizioso unable to squeeze back under at Turn 6. This set us up for another final corner epic between the two. Dovi got the run off Turn 11 to brake late into the final corner to get alongside Marquez, but the Desmosedici couldn’t quite drop its anchors quick enough – Marquez cutting back underneath Dovi to win the race to the line, with Vinales just 0.270 away from the win in third.

Rossi crossed the line fourth in what was a hugely promising weekend for Yamaha, with fellow M1 and leading Independent Team rider Zarco getting the better of Rins – P5 and P6 respectively for the duo. Crutchlow ended the race seventh, finishing 0.171 ahead of Alvaro Bautista (Angel Nieto Team) in eighth, with the two Alma Pramac Racing riders completing the top ten – P9 for Danilo Petrucci, P10 for Jack Miller.

Marc Marquez
“Of course I’m very, very happy today because it’s the first time I’ve beaten Dovi in this way. We were very equal, and my strategy was to try and attack in order to open a gap and avoid having it come down to the last lap. But Dovi had a very good pace and I was struggling with the front tyre, so I wasn’t able. Instead, I just tried to manage the tyres and stick to him. Honestly, I wasn’t so confident going into the final lap because I’ve lost many head-to-head finishes with him in the past.

"But this time, we swapped roles–I used Dovi’s style and Dovi used Marquez’s style!–and that worked to overtake him on the corner exit. It was a great feeling to race in front of all the Thai fans, who cheered and supported all of us riders equally, really enjoying the sport and making me feel good over the whole weekend. I’m really thankful to them. Now the first match ball will be in Japan, which is the most important race for Honda as it’s their only home Grand Prix. Of course we’ll try our best there, but if it’s not possible, the main target is still to achieve the title at some point."

Dovizioso: "It is never nice to lose at the last corner but I am really happy because this track, it wasn't ours. In February we struggle a little bit and we came here, we struggle a little bit at the beginning but we did some changes and I think we did a good step because the consumption was more than Aragon and at the end we battle for the victory. We did an incredible work and we are continuing to improve."