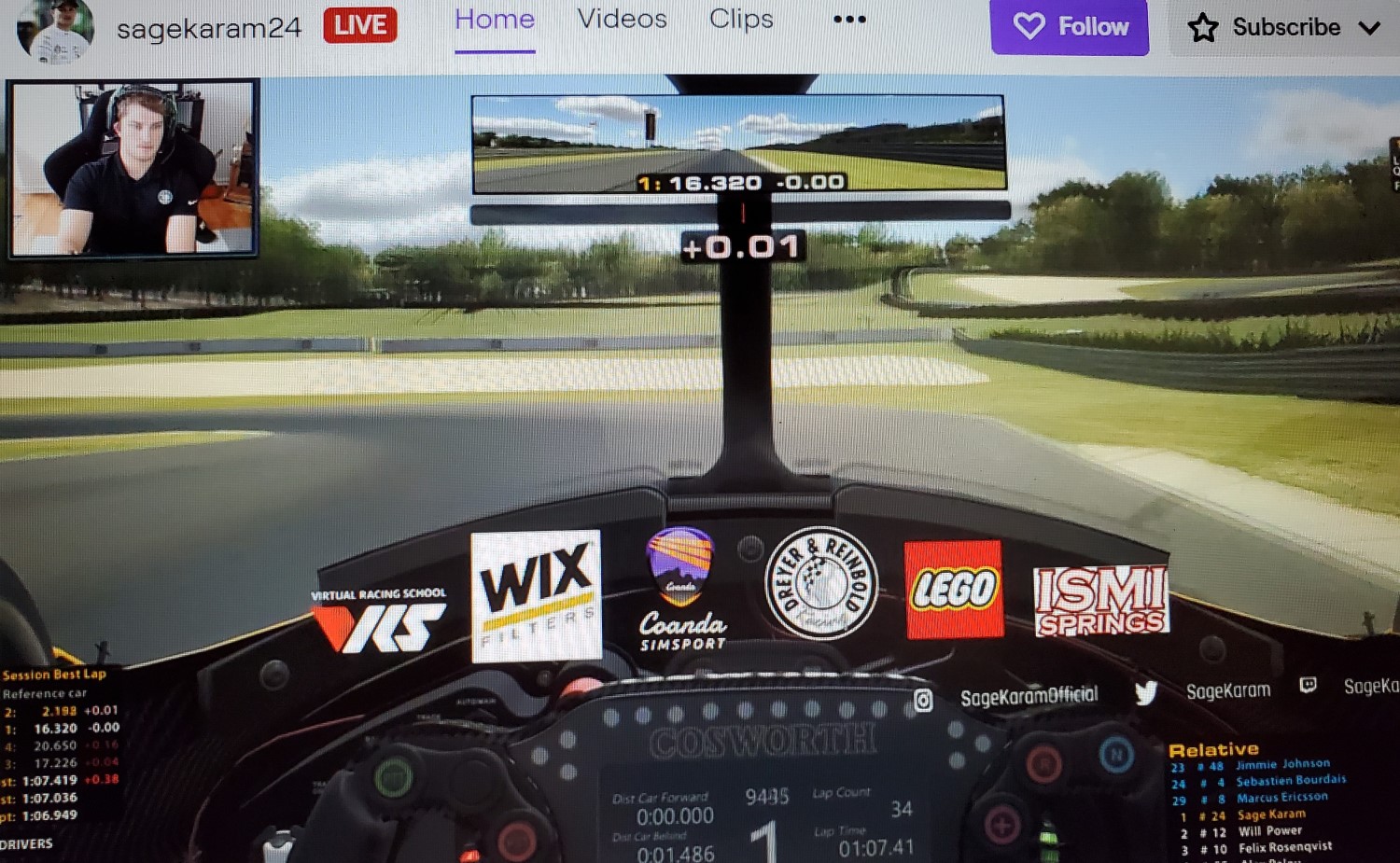 Sage Karam, the winner of the inaugural INDYCAR iRacing Challenge event last Saturday at Watkins Glen International in the No. 24 Dreyer & Racing Racing WIX Filters Chevrolet, looked on his way to another iRacing virtual victory Saturday at the picturesque Barber Motorsports Park, the 2.38-mile, 16-turn road circuit east of Birmingham. But the finish wasn’t the same this week.

Because of the COVID-19 virus, the 2020 NTT INDYCAR SERIES competitors were forced to compete on simulators today in the virtual competition. Saturday’s event was the second of six races scheduled in the INDYCAR iRacing Challenge.

Karam the 25-year-old racer from Nazareth, Pa., captured his second straight pole position as the only driver to break one minute, six seconds barrier in qualifying. Sage posted a top time of 1:05.958 followed by Will Power’s 1:06.032 and Felix Rosenqvist’s 1:06.090 prior to the 45-lap feature shown for the first time on the NBC Sports Network.

Karam, who led 43 of 45 laps at Watkins Glen, moved out to a 2.132-margin over Power after the first 13 laps of the race before the mandatory ‘Competition Yellow’ caution period on lap 15. At the lap 19 restart, Sage began to extend his advantage again before his lap 25 pit stop.

Karam had to reduce his pace right before his pit stop due to the slower car of Sebastian Bourdais who was attempting not to be a lap down to the leader at mid-race. That slower pace hurt Karam’s ‘in’ and ‘out’ laps from his pit stop.

On his return to the racing surface, Karam began a tight battle with Rosenqvist on lap 27 and the two drivers raced wheel-to-wheel before the Sweden driver spun in front of Sage. They made contact but both drivers continued. There was little damage to Karam’s No. 24 DRR WIX Filters machine.

Sage looked to be back up to speed and making a hard charge towards the leader, Scott McLaughlin who had pitted earlier. Unfortunately, as Karam came onto the back straight he encountered the spinning car of Tony Kanaan. Sage had nowhere to go and hit Kanaan’s stalled vehicle.

The crash eliminated Karam for the Barber contest with a 27th place finish.

As at Watkins Glen, Sage led the most laps with 24 circuits and he now moves to the third round of the INDYCAR iRacing Challenge set for next Saturday, April 11, at the two-mile oval of Michigan International Speedway in Brooklyn, Mich. MIS has hosted a total of 55 IndyCar events from 1968 to 2007. The last winner at MIS was Kanaan in 2007.

“We were looking pretty good after qualifying with another pole," said Karam. “And my pace was good early. The DRR WIX Filters Chevy was in fine shape and the pace was going our way. I felt like I was cruising in the middle of the race. At the competition yellow (lap 15), the car still felt good and I got good restart too. I was stuck behind (Sebastian) Bourdais just before the pit stop and lost a lot of time. He was just blocking me. That screwed up my’ in lap’ and ‘out lap’ for the pit stop.

“That’s how Rosenqvist got in front of me after the pit stop. We were racing really hard and both being aggressive. He then overshot the corner. I couldn’t tell if I hit him then. He was spinning and we made contact. We were racing for the win. I like Felix a lot. He is a great guy. Overall, I’m having a lot of fun with the iRacing events. And we have a lot of guys competing which is great for the fans. We’ll get ready for the oval now. Thanks to the fans for watching."

In the 90 laps competing so far in the INDYCAR iRacing Challenge, Karam has led 67 of them at Watkins Glen International and Barber Motorsports Park.