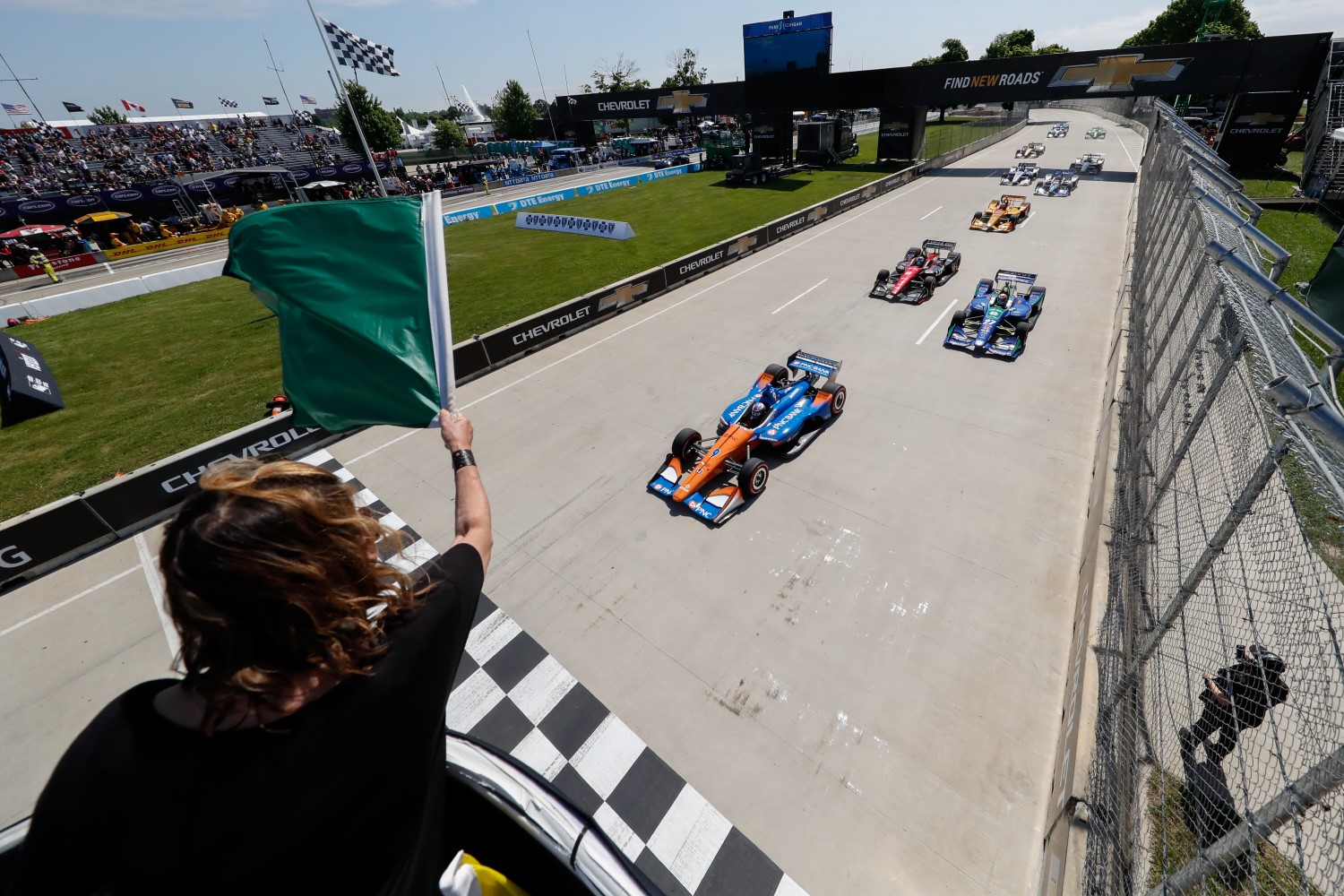 UPDATE The Detroit Metro Times and Tom Perkins are at it again, finding a way to criticize the Detroit GP – Once again Detroit GP tore up Belle Isle, left it a muddy mess.

A little background on Mr. Perkins and the Detroit Metro Times:

Tom Perkins, the reporter for the Detroit Metro Times who is savaging the Detroit Grand Prix, is usually their Dining Editor.

Too bad the IndyCar teams no longer have the four-star chefs overseeing the culinary operations like in the CART hey-day. Then, Mr. Perkins could report upon substantive issues….

The Detroit Metro Times is an alternative, free-distributed weekly newspaper. Alternative newspapers have to be counter-establishment to be successful for its demographic.

The fact remains that the Detroit Grand Prix does not help local community groups financially. Their volunteer program is a joke (it is just a form of slavery, from a minimum wage standpoint).

The true problem is that the Detroit Grand Prix is a big money-loser, and DGP management resents criticism, because Detroit Metro Times are in the right.

06/03/18 When the sun sets over Belle Isle Sunday evening, some 100,000 race fans will have squeezed onto the western edge of Detroit's most iconic park to watch the Detroit Grand Prix the last four days.

They can thank Roger Penske.

Though not everyone who loves Belle Isle feels grateful. Some see the race as a nuisance and worry about the environmental effect the race has on the island. A handful of protesters arrived again last week to voice displeasure with the setup.

Penske doesn't want a fight. He just thinks it's too bad the folks complaining can't quite see the long view. Or at least his long view.

"I think if you step back and you weigh what we've brought to Belle Isle, from the standpoint of investment and what the conservancy has done, what we've done to the western end of the island, I don't think we should have a problem," he said last week during the Grand Prix's media day at the Detroit Yacht Club.

"I just wish there was a way to rationally sit down with people to try to explain the benefits. We're not in a situation where we want to get into a fight on anything. We want to continue to try to make it easier for everybody on Belle Isle."

Penske chose his words carefully. Which isn't surprising, considering his role in a handful of the city's recent marquee events and his reputation as someone who can negotiate uneven terrain.

The bottom line, he said, is that the race "is an event for Detroit. (We are) showcasing our city. Trust me, that's worth a lot to this city."

That part is hard to argue. Perceptions matter. Whether you are a race fan or not.

And while the gorgeous aerial shots of the race and the island — which highlight the green of the trees and the blue of the water — won't do anything to solve Detroit's most intractable issues, the images help contradict so many deeply ingrained views.

To this day, he remembers what then-NFL Commissioner, Paul Tagilabue, told him over dinner not long after Detroit won the bid for the Super Bowl:

"He said, 'we want to bring our big event to cities to help them get better.' I always think about that," he said.

It's why he wanted to bring the race back to Belle Isle in 2012. It's why he hopes the race will continue after this year –the contract with the state's department of natural resources is up.

And it's why he wants the folks who worry the race occupies the island for too long — a little over two months from set up to teardown — might reconsider their perspective.

"I'm not looking for trouble," he said. "This is not a business. We are doing this to support the city. (And) the city has a story to tell."

Detroit Belle Isle Grand Prix and state officials have repeatedly claimed that the Grand Prix has a contract in place allowing it to run the race on the public island park through 2018.

But an attorney who specializes in maritime law questions whether that's true. The attorney, Paul Andrew Kettunen, owns a downtown Detroit practice and is working on the case pro bono for Belle Isle Concern. The latter is a group that's pushing to get the Grand Prix removed from Detroit’s 982-acre island park. It contends that an IndyCar race shouldn’t be held in a state park or on Belle Isle.

Kettunen says the Grand Prix was operating under a contract between 2007 and 2014, but no documentation appears to exist evidencing the extension of that contract for races between 2015 through 2018. The contract would provide for the use license and issuance of permits required to run a street race legally under state law.

Kettunen tells Metro Times that Michigan Department of Natural Resources officials have told him that the contract was renewed, but, he says, “it appears that it was not."

Kettunen also questions whether running the race in a state park is a violation of the public trust doctrine under the Michigan Environmental Protection Act. Essentially, the public puts trust in the state to care for and provide public access to its natural resources. Kettunen says there’s a case to be made that the DNR is failing in those duties, and he's considering a lawsuit.

He and some parkgoers point to a variety of issues on the island as evidence. Among other problems, billionaire organizer Roger Penske’s team poured ten-acres of concrete on a grassy area on Belle Isle’s west side. Each year, the race turns over 20 percent of the island — and what some say is 26 percent of its usable land — into a sprawling construction zone for most of April, May, and June.

During that time it’s filled with miles of concrete barriers, miles of fencing, billboards, cables, trucks, and grandstands. Large parts of the island are also off limits to public for weeks or months at a time. Detroit Metro Times